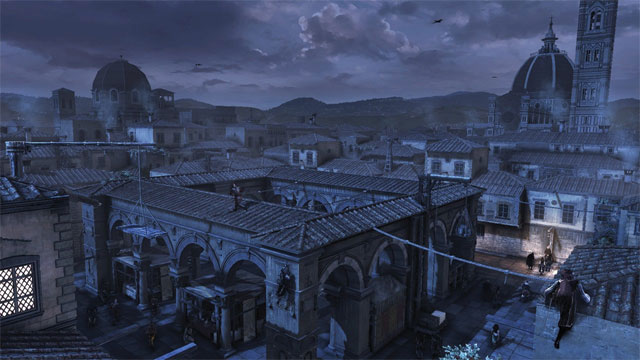 For those you not investing your online multiplayer hours into something with a number or the words "battle" or "war" in it, you might be interested in Ubisoft's latest Assassin's Creed: Revelations downloadable content offering.

Out today on Xbox Live, the PlayStation Network and PC, the Mediterranean Traveler map pack adds six multiplayer maps to Revelations' online mode. Three of the maps are brand-stabbing-new ones: Jerusalem, Constantinople and Dyers, while the other three are fan favorites from AC: Brotherhood, Firenze, San Donato and Siena. The DLC pack also adds some more achievements to the game.

You can grab the DLC for 800 Microsoft Points or $9.99 on the PlayStation Network. But if you're not too keen on dropping down the big bucks on this DLC without giving it a spin, not to worry, Ubisoft has just the thing for you. You can download a free trial of the map pack, which will expire three days after you play it the first time. Now you have no excuse to take a stab at 'em!

And... that's a record amount of "stab" references in an Assassin's Creed post for me. I'll be here all week, folks!

If you enjoyed this Assassin's Creed: Revelations article, you're encouraged to discuss it with the author and with other members of the site's community. If you don't already have an HonestGamers account, you can sign up for one in a snap. Thank you for reading!