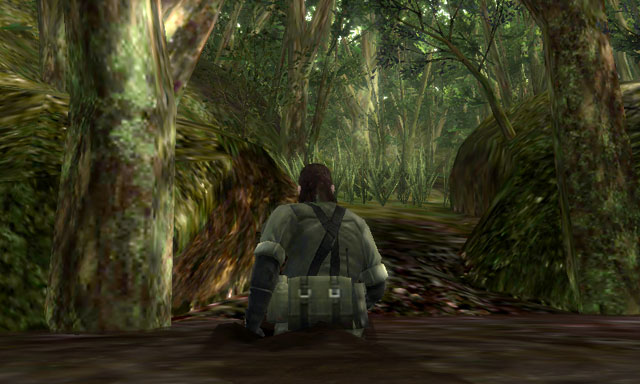 Konami announced today that Metal Gear Solid: Snake Eater 3D will finally hit shelves on Feb. 21 in North America and March 8 in Europe. The 3D remake was initially slated for release within a few months of the 3DS' launch window, but was delayed in July 2011 to an unspecified 2012 date.

Initially launched on Sony's PlayStation 2, in 2004, Snake Eater put gamers in the sneaking boots of Big Boss (Solid Snake's daddy) as he sneaks around a Soviet jungle during the Cold War. Aside from its expected stealth mechanics, Snake Eater introduced survival gameplay into the series, making players hunt and consume food to have enough energy to keep Big Boss in mission-ready shape. The title was well received; it currently has a 91 rating on Metacritic. It was also recently remade for the Xbox 360 and PlayStation 3 editions of the Metal Gear Solid HD Collection, which hit shelves in Nov. 2011.

Metal Gear Solid is one of gaming's most beloved franchises, and checking out Snake Eater, arguably the series' best entry, in 3D is an experience I'd love to have. And if I had the cheddar, I'd love to throw some money at the gorgeous special edition, snakeskin 3DS the game will apparently launch with. Unfortunately, I'll have to really think about picking this one up, considering I picked up the HD collection already.

If you enjoyed this Metal Gear Solid: Snake Eater 3D article, you're encouraged to discuss it with the author and with other members of the site's community. If you don't already have an HonestGamers account, you can sign up for one in a snap. Thank you for reading!

© 1998-2020 HonestGamers
None of the material contained within this site may be reproduced in any conceivable fashion without permission from the author(s) of said material. This site is not sponsored or endorsed by Nintendo, Sega, Sony, Microsoft, or any other such party. Metal Gear Solid: Snake Eater 3D is a registered trademark of its copyright holder. This site makes no claim to Metal Gear Solid: Snake Eater 3D, its characters, screenshots, artwork, music, or any intellectual property contained within. Opinions expressed on this site do not necessarily represent the opinion of site staff or sponsors. Staff and freelance reviews are typically written based on time spent with a retail review copy or review key for the game that is provided by its publisher.