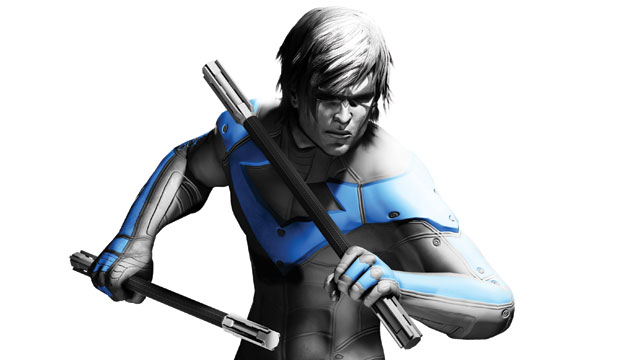 Available today on the PlayStation Store and the Xbox Live Marketplace for $7 and 540 Microsoft Points, respectively, is the Nightwing Bundle Pack.

By now, you've probably conquered Rocksteady's latest masterpiece, Batman: Arkham City. You've righted all the wrongs the scum of Gotham committed. You've scoured all of Arkham City's nooks and crannies, picking up every trophy and deciphering all of Riddler's conundrums. Heck, you even somehow finished all the insanely difficult Advanced Reality (AR) training sequences. Now, you've got a beard to shave, a shower to take and some sleep to catch up on.

But wait, Warner Bros. has some more for you. Available today on the PlayStation Store and the Xbox Live Marketplace for $7 and 540 Microsoft Points, respectively, is the Nightwing Bundle Pack. This downloadable content will put gamers in the shoes of none other than Dick Grayson, the original Robin, who's now known as the independent superhero Nightwing. (You can't be a Boy Wonder forever, you know?)

Downloading the pack will let Nightwing be playable in Arkham City's many challenge maps, where Mr. Grayson can show off his different combat style and gadgets. He's even bringing his own two challenge maps into the fray: Wayne Manor and Main Hall.

Now you've got a decision to make: Sit back on that couch and don that Nightwing suit, or finally take that much-needed bath. (I've heard Arkham City has quite the unpleasant stench.)

If you enjoyed this Batman: Arkham City article, you're encouraged to discuss it with the author and with other members of the site's community. If you don't already have an HonestGamers account, you can sign up for one in a snap. Thank you for reading!

© 1998-2020 HonestGamers
None of the material contained within this site may be reproduced in any conceivable fashion without permission from the author(s) of said material. This site is not sponsored or endorsed by Nintendo, Sega, Sony, Microsoft, or any other such party. Batman: Arkham City is a registered trademark of its copyright holder. This site makes no claim to Batman: Arkham City, its characters, screenshots, artwork, music, or any intellectual property contained within. Opinions expressed on this site do not necessarily represent the opinion of site staff or sponsors. Staff and freelance reviews are typically written based on time spent with a retail review copy or review key for the game that is provided by its publisher.