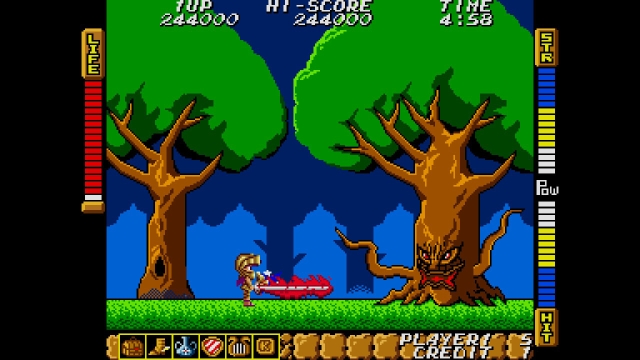 The games will arrive in December and bring the total number of games in the collection to 24.

NIS America today announced six more games that will be joining SNK 40th Anniversary Collection as free DLC. The Nintendo Switch game is due to arrive on November 13, 2018, both digitally and in fine physical form.

The six titles announced today were:

Five previous titles were also announced as free DLC for the bundle, on October 17. Those titles are:


Nine of the eleven DLC titles will be added as an automatic patch on December 11, while Beast Busters and SAR: Search and Rescue will be accessible as a free DLC bundle from the game's store page.

When the game arrives in stores, it will include the following lineup on the cartridge:


A lot of the titles above were available first in arcades and then were released as home conversions, often to the NES. The collection will in many cases include both editions. The compilation is being put together by the recently revamped Digital Eclipse, which is the team responsible for the first Mega Man Anniversary Collection on modern consoles, and I believe for the Disney Afternoon Collection.

SNK 40th Anniversary Collection carries an MSRP of $39.99 USD and ships with arcade and console versions of overdrive's favorite game of all time, Athena, included right on the cartridge (it may not actually be his absolute favorite game). What more could you possibly want? Preorder it today!

If you enjoyed this SNK 40th Anniversary Collection article, you're encouraged to discuss it with the author and with other members of the site's community. If you don't already have an HonestGamers account, you can sign up for one in a snap. Thank you for reading!

© 1998-2020 HonestGamers
None of the material contained within this site may be reproduced in any conceivable fashion without permission from the author(s) of said material. This site is not sponsored or endorsed by Nintendo, Sega, Sony, Microsoft, or any other such party. SNK 40th Anniversary Collection is a registered trademark of its copyright holder. This site makes no claim to SNK 40th Anniversary Collection, its characters, screenshots, artwork, music, or any intellectual property contained within. Opinions expressed on this site do not necessarily represent the opinion of site staff or sponsors. Staff and freelance reviews are typically written based on time spent with a retail review copy or review key for the game that is provided by its publisher.