New Super Mario Bros. U may actually have something new to offer 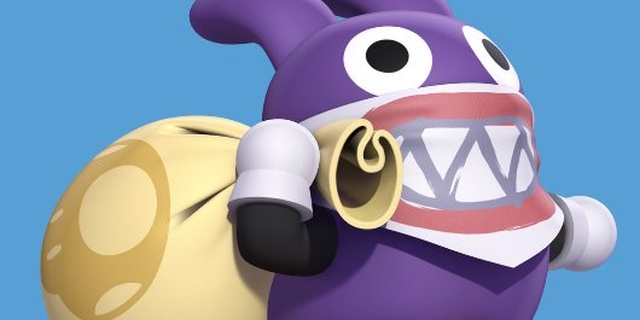 Has Nintendo been listening to the bored masses?

Nintendo has detailed some new features for Wii U launch title, New Super Mario Bros. U.

The last game in the series, New Super Mario Bros. 2 for 3DS, was criticized for its failure to innovate on what we already expect from a Mario game after all these years. It looks like Nintendo plans to deliver some new content with the Wii U title. The biggest addition to the Mario formula concerns this purple rabbit-y thing seen above.

When this little thief named Nabbit appears on the world map, it's up to Mario and Luigi to chase him down and nab back some of his ill-begotten riches. You'll chase him down throughout a level, and if successful, Mario will return his stolen goods to Toad. Toad will then reward you with a P-acorn that allows you to fly endlessly throughout one stage. So not everything about this is new, as I'm sure we all recognize this mechanic from Mario 3, but it's still nice to see Nintendo try something.

New Super Mario Bros. 2 also features 'Boost Mode,' the return of 'Coin Battle' from NSMBWii, and 'Challenge Mode.' Coin Battle, much like most of NSMB2 is an up-to-four-player race to see who can collect the most coins across unique courses. It's also compatible with Boost Mode, so one player can place blocks and obstacles on the stage with the Wii U GamePad. Challenge Mode is also multiplayer, and features tasks set in four categories, also compatible with Boost Mode: Time Attack, Coin Collection, 1-Up Rally, and Special.

If you enjoyed this New Super Mario Bros. U article, you're encouraged to discuss it with the author and with other members of the site's community. If you don't already have an HonestGamers account, you can sign up for one in a snap. Thank you for reading!

© 1998-2020 HonestGamers
None of the material contained within this site may be reproduced in any conceivable fashion without permission from the author(s) of said material. This site is not sponsored or endorsed by Nintendo, Sega, Sony, Microsoft, or any other such party. New Super Mario Bros. U is a registered trademark of its copyright holder. This site makes no claim to New Super Mario Bros. U, its characters, screenshots, artwork, music, or any intellectual property contained within. Opinions expressed on this site do not necessarily represent the opinion of site staff or sponsors. Staff and freelance reviews are typically written based on time spent with a retail review copy or review key for the game that is provided by its publisher.