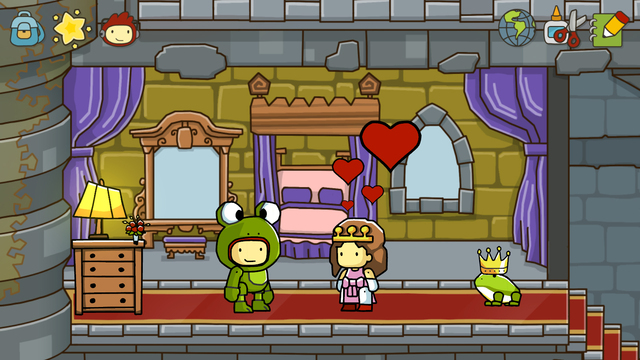 Mario and the rest of the gang buddy up with Maxwell this November.

As previously teased, Nintendo characters are making their way into Scribblenauts Unlimited, according to a Warner Bros. press release. Characters from the Super Mario and Legend of Zelda universe are scribbled into Maxwell's next adventure, which will launch for Nintendo's upcoming Wii U, the Nintendo 3DS and PC.

However, the Nintendo characters are exclusive to the Wii U version of the title.

"Players will delight in producing fantastical and sometimes hilarious interactions between the Mario and Legend of Zelda characters and objects, alongside everyone's favorite word-wielding Scribblenauts adventurer, Maxwell," the press release stated. "Discovered Nintendo characters and objects will behave in the fun and fantastical ways they do in their respective game worlds."

As usual in this video game world of ours, details on what exactly that means are sparse. However, developer 5th Cell did confirm with IGN that the Nintendo characters won't be modifiable with adjectives, though players will still be able to summon items for them to use. (Be sure to not summon a guardian fairy for Link.)

Scribblenauts Unlimited launches alongside Nintendo's Wii U this November.

If you enjoyed this Scribblenauts Unlimited article, you're encouraged to discuss it with the author and with other members of the site's community. If you don't already have an HonestGamers account, you can sign up for one in a snap. Thank you for reading!

© 1998-2020 HonestGamers
None of the material contained within this site may be reproduced in any conceivable fashion without permission from the author(s) of said material. This site is not sponsored or endorsed by Nintendo, Sega, Sony, Microsoft, or any other such party. Scribblenauts Unlimited is a registered trademark of its copyright holder. This site makes no claim to Scribblenauts Unlimited, its characters, screenshots, artwork, music, or any intellectual property contained within. Opinions expressed on this site do not necessarily represent the opinion of site staff or sponsors. Staff and freelance reviews are typically written based on time spent with a retail review copy or review key for the game that is provided by its publisher.