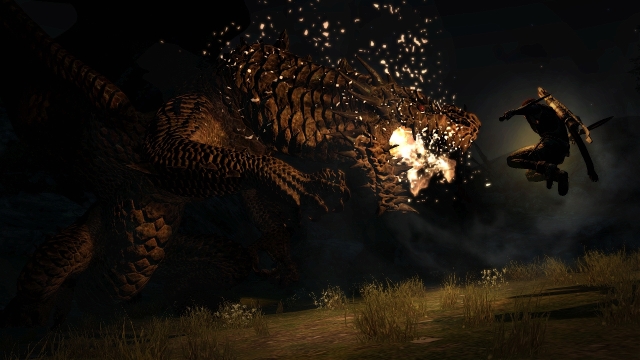 The dark is rising for a major expansion in 2013

There's great news for pawn fans, as Capcom has announced a new major expansion for action-RPG Dragons Dogma. The Dark Arisen expansion will arrive on both Xbox 360 and PlayStation 3 in 2013. Further details are currently under wraps.

Dragons Dogma has sold over a million copies worldwide since its release earlier this year. Shortly afterward, Capcom stated their intention to turn the title into an ongoing franchise.

To tide fans over while the dark rises, the rather self-explanatory Speedrun and Hard modes will give you another reason to play through Dragons Dogma before the year is out. Speedrun challenges you to beat the game as rapidly as possible, while Hard mode ramps up the difficulty. In return, youll earn yourself some shiny new equipment.

Check back for more on Dark Arisen as details surface.

If you enjoyed this Dragon's Dogma article, you're encouraged to discuss it with the author and with other members of the site's community. If you don't already have an HonestGamers account, you can sign up for one in a snap. Thank you for reading!

© 1998-2020 HonestGamers
None of the material contained within this site may be reproduced in any conceivable fashion without permission from the author(s) of said material. This site is not sponsored or endorsed by Nintendo, Sega, Sony, Microsoft, or any other such party. Dragon's Dogma is a registered trademark of its copyright holder. This site makes no claim to Dragon's Dogma, its characters, screenshots, artwork, music, or any intellectual property contained within. Opinions expressed on this site do not necessarily represent the opinion of site staff or sponsors. Staff and freelance reviews are typically written based on time spent with a retail review copy or review key for the game that is provided by its publisher.