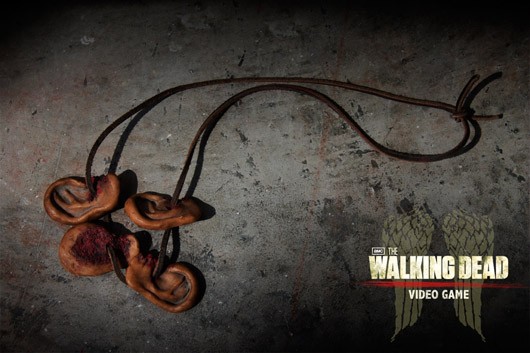 No, not the excellent adventure game that just recently saw its second episodic release. Activision has developer Terminal Reality hard at work on a First Person Shooter based on the TV adaptation. The game stars loveable crossbow-wielding hillbilly Daryl Dixon and his not-so-loveable racist brother Merle, and is a prequel to the TV show.

Anyway, if that sounds appealing to you, you might be interested in pre-ordering the game at SDCC and getting this creepy zombie ear necklace based on the one made by Daryl in the TV series during a moment of insanity. Quantities are extremely limited, with only 100 available, so don't shamble.

In the meantime, there's a trailer that doesn't really do much more than spoil the TV show.

If you enjoyed this The Walking Dead: Survival Instinct article, you're encouraged to discuss it with the author and with other members of the site's community. If you don't already have an HonestGamers account, you can sign up for one in a snap. Thank you for reading!

© 1998-2020 HonestGamers
None of the material contained within this site may be reproduced in any conceivable fashion without permission from the author(s) of said material. This site is not sponsored or endorsed by Nintendo, Sega, Sony, Microsoft, or any other such party. The Walking Dead: Survival Instinct is a registered trademark of its copyright holder. This site makes no claim to The Walking Dead: Survival Instinct, its characters, screenshots, artwork, music, or any intellectual property contained within. Opinions expressed on this site do not necessarily represent the opinion of site staff or sponsors. Staff and freelance reviews are typically written based on time spent with a retail review copy or review key for the game that is provided by its publisher.