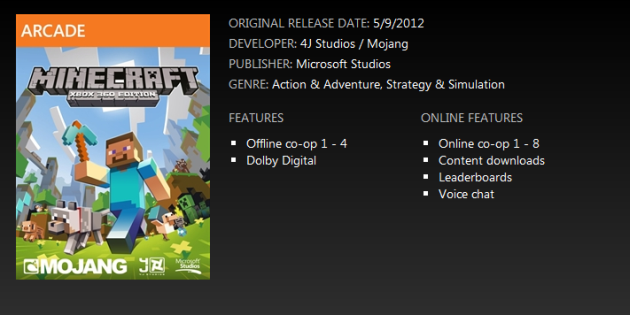 Minecraft's use of voxels give it a sort of retro look, but looks can be deceiving. If you plan to play the Xbox 360 version of the game on an old TV, you won't have access to the full experience.

Most of the game works fine on an SD TV, but split-screen co-op mode will not launch if the game isn't being played at at least 720p. Players playing at lower resolutions are met with a screen telling them to "play the game in High Definition mode" if they want to dig holes and build stuff with buddies in the same room.

Developer 4J Studios stands by the decision to make split-screen multiplayer HD-only, Tweeting, "The inventory and crafting just didn't work in splitscreen Standard Definition - it was too small to make out."

That's all well and good, but the game's Marketplace page doesn't mention the requirement, meaning the uninformed won't find out about it until after they buy the game. Buyer beware.

If you enjoyed this Minecraft: Xbox 360 Edition article, you're encouraged to discuss it with the author and with other members of the site's community. If you don't already have an HonestGamers account, you can sign up for one in a snap. Thank you for reading!

© 1998-2020 HonestGamers
None of the material contained within this site may be reproduced in any conceivable fashion without permission from the author(s) of said material. This site is not sponsored or endorsed by Nintendo, Sega, Sony, Microsoft, or any other such party. Minecraft: Xbox 360 Edition is a registered trademark of its copyright holder. This site makes no claim to Minecraft: Xbox 360 Edition, its characters, screenshots, artwork, music, or any intellectual property contained within. Opinions expressed on this site do not necessarily represent the opinion of site staff or sponsors. Staff and freelance reviews are typically written based on time spent with a retail review copy or review key for the game that is provided by its publisher.