God of War: Ascension has Kratos-less multiplayer, makes no sense 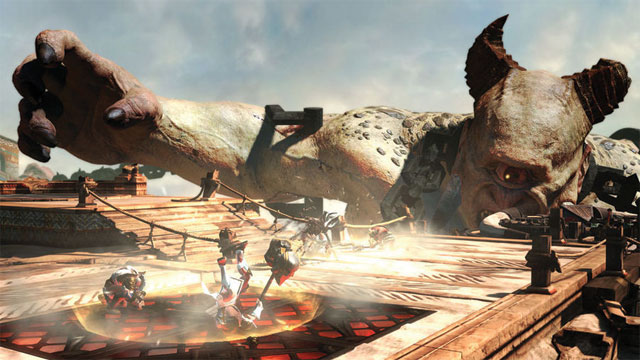 It'll be some good ol' Spartans versus Trojans in God of War: Ascension's multiplayer mode.

God of War: Ascension, the recently announced prequel to Sony's God of War hitting the PlayStation 3 later this year, will have a series-first multiplayer mode. But the series' iconic, angry anti-hero Kratos won't be a part of it, according to a preview by The Verge.

Also missing from the game's multiplayer mode: a bit of clarity on what it exactly is. The Verge seemed to be as perplexed by the multiplayer demo they viewed as I was reading about it.

The demo began with what appeared to be some single-player footage of a man battling a large, one-eyed monster, which Todd Papy, the game's director, eventually admitted was meant to "trick" those in attendance. Soon enough, another warrior joins our first combatant in taking on the giant ogre.

It appeared like they were looking at a cooperative God of War mode. But this wasn't the case either. As the two soliders, garnished in red, enter a village where another battle continues. But then, some blue soldiers join the fray against the red soldiers.

It's some good ol' Spartans versus Trojans in this four versus four God of War: Ascension multiplayer mode.

The two sides battle, with the red team managing to "suppress" the blue team, earning themselves the right to slay another giant, chained beast while the blue team takes a backseat in the action. As the red team continues its mutilation of the monster, the Ascension logo hits the screen, leaving the crowd with several questions.

What mode did they just witness? How is the winner of a round decided? Will there also be a cooperative mode?

If you enjoyed this God of War: Ascension article, you're encouraged to discuss it with the author and with other members of the site's community. If you don't already have an HonestGamers account, you can sign up for one in a snap. Thank you for reading!

© 1998-2020 HonestGamers
None of the material contained within this site may be reproduced in any conceivable fashion without permission from the author(s) of said material. This site is not sponsored or endorsed by Nintendo, Sega, Sony, Microsoft, or any other such party. God of War: Ascension is a registered trademark of its copyright holder. This site makes no claim to God of War: Ascension, its characters, screenshots, artwork, music, or any intellectual property contained within. Opinions expressed on this site do not necessarily represent the opinion of site staff or sponsors. Staff and freelance reviews are typically written based on time spent with a retail review copy or review key for the game that is provided by its publisher.