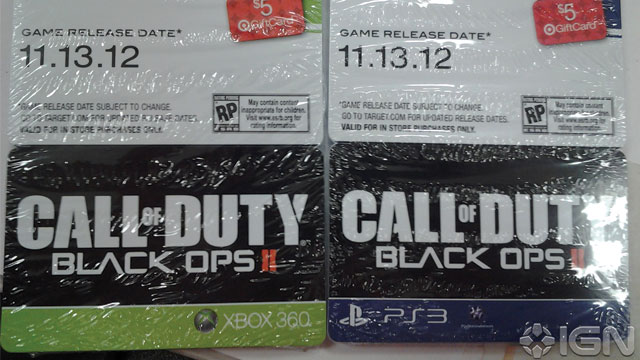 I would've made a joke about how you didn't see this one coming, but you probably saw that coming.

Anywho, it looks like Call of Duty: Black Ops II is indeed a thing, and it's headed to shelves on Nov. 13, 2012, according to the above Target pre-order cards, submitted to IGN from a tipster named Richard. The cards look pretty legitimate, and, well, Activision does release a Call of Duty every year, so I give you my blessing to believe this.

Activision had recently announced the next Call of Duty game would be unveiled during the NBA playoffs. You can still catch that reveal on May 1 on TNT during game two between the Philadelphia 76ers and the Chicago Bulls.

If you enjoyed this Call of Duty: Black Ops II article, you're encouraged to discuss it with the author and with other members of the site's community. If you don't already have an HonestGamers account, you can sign up for one in a snap. Thank you for reading!

© 1998-2020 HonestGamers
None of the material contained within this site may be reproduced in any conceivable fashion without permission from the author(s) of said material. This site is not sponsored or endorsed by Nintendo, Sega, Sony, Microsoft, or any other such party. Call of Duty: Black Ops II is a registered trademark of its copyright holder. This site makes no claim to Call of Duty: Black Ops II, its characters, screenshots, artwork, music, or any intellectual property contained within. Opinions expressed on this site do not necessarily represent the opinion of site staff or sponsors. Staff and freelance reviews are typically written based on time spent with a retail review copy or review key for the game that is provided by its publisher.