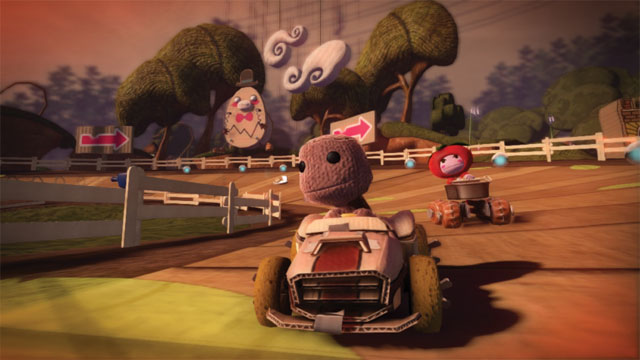 United Front Games takes the helm for this LBP racer.

It only makes sense that United Front Games is behind Sony's upcoming LittleBigPlanet Karting. After all, the studio has plenty of experience creating its own "Play, Create, Share" racing game, the PlayStation 3's ModNation Racers.

Media Molecule announced United Front as LBP Karting's developer today on the PlayStation blog. James Grieve, a senior producer for UFG, then hijacked the blog post to talk about the upcoming racer, promising a 2012 release date along the way.

"Looking ahead, we cant wait for all of the LBP fans out there to get their hands on LittleBigPlanet Karting," said Grieve. "The LBP community is unparalleled in the gaming world for the passion and creativity they bring and its going to be exciting to see where theyre able to take this new journey for Sackboy."

Grieve says the team's goal is to create a fast-paced racer, "married with the unbridled creativity of LBP." Of course, that means your toolbox will be available to help shape not only your Sackboys and Sackgirls, but the game's 3D world.

Later on in the comments section, Grieve confirmed the game is scheduled only for the PlayStation 3. A Vita version isn't currently in the cards. My only other question? Why would Sony want to compete against its own ModNation Racer brand by limiting the extremely open LBP series to strictly a racer?

If you enjoyed this LittleBigPlanet Karting article, you're encouraged to discuss it with the author and with other members of the site's community. If you don't already have an HonestGamers account, you can sign up for one in a snap. Thank you for reading!

© 1998-2020 HonestGamers
None of the material contained within this site may be reproduced in any conceivable fashion without permission from the author(s) of said material. This site is not sponsored or endorsed by Nintendo, Sega, Sony, Microsoft, or any other such party. LittleBigPlanet Karting is a registered trademark of its copyright holder. This site makes no claim to LittleBigPlanet Karting, its characters, screenshots, artwork, music, or any intellectual property contained within. Opinions expressed on this site do not necessarily represent the opinion of site staff or sponsors. Staff and freelance reviews are typically written based on time spent with a retail review copy or review key for the game that is provided by its publisher.