Plant Man's stage is one of the prettiest ever featured in the series, at least on the NES, but it's also quite treacherous. After a relaxing opening, you'll find your nerves tested as you are forced to negotiate a series of tricky jumps while dealing with flying enemies of all sorts. 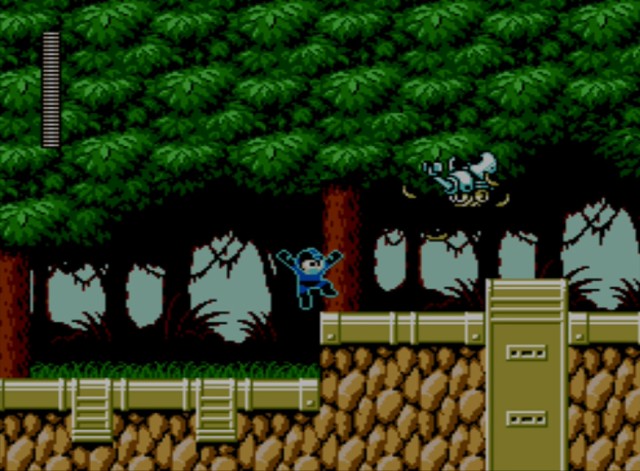 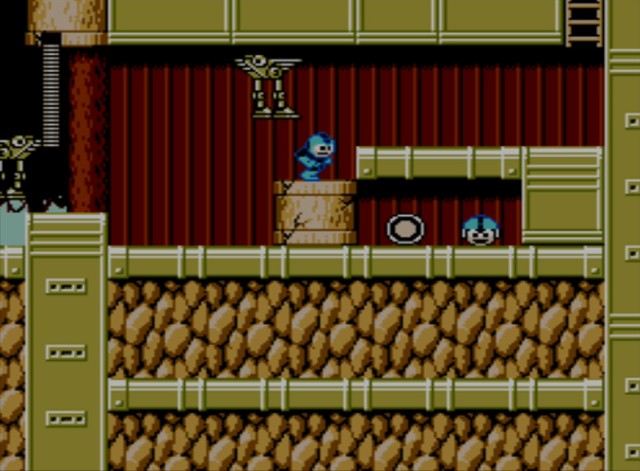 As you start your advance toward the right, watch the dense branches overhead. Enemy robots will sometimes descend from that direction, with their presence first announced by falling leaves. You can eliminate them with charged shots.

Another threat is on ground level. Grasshopper-like robots hide in the grass and will quickly approach as you get near. They also are easily dispatched using your standard arm cannon. As long as you're paying attention, you should be able to advance without taking damage. Then, near the far right side of the area, you can use your power suit to break apart the block and collect an energy capsule and a 1-up icon, if desired. After that, climb the ladder. 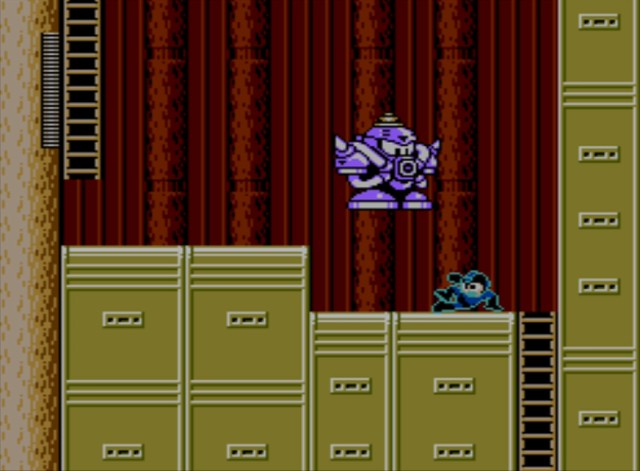 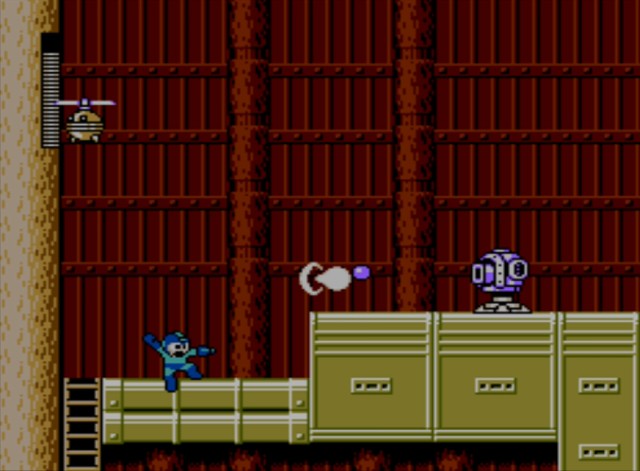 The enemy in this area will spot you, then fly into the air in a wide arc. He'll land ahead of you, if you wait near the ladder, then launch into the air again. Your best bet if you can manage it is to slide under one of his high jumps. Then you can run for the ladder to the far left and hopefully climb it before he can catch you with one of his high leaps. Or you can get in some more shots and keep hitting him until he finally explodes.

In the room you reach by climbing that ladder, you'll find floating orange enemies, as well as cannons positioned along the ledge to the right. All of those foes are no match for your arm cannon, so tend to them quickly as you advance once more. Then drop through an opening at the far right side of the chamber. 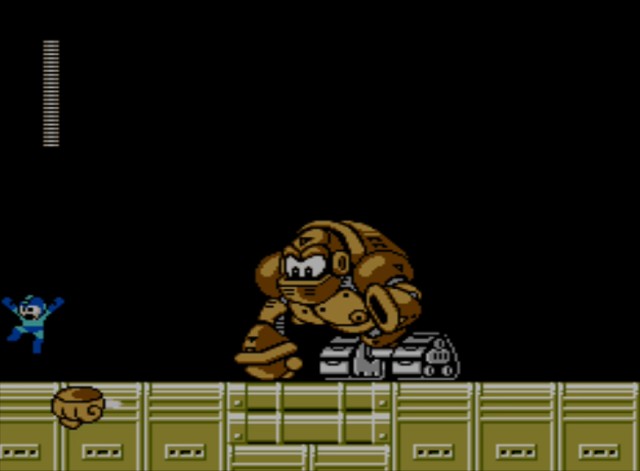 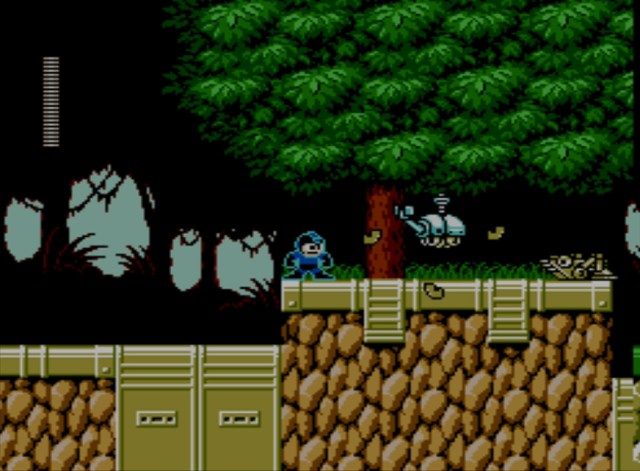 In this room, your pal Fliptop will run over to you and give you a random item. Then you can drop through another opening and face a mini-boss.

This guy looks like a robot boxer, attached to a tank's base. He slowly advances toward the left, and you need to jump and shoot him at eye level to do any damage. In return, the robot launches his fists toward your current location, periodically. Sometimes he also fires a spread shot. Don't worry about that stuff, though. Just focus on hitting him with as many shots as you can manage, until he finally explodes (hopefully without getting too close to your side of the screen).

Past that mini-boss, you'll find more dense forestation, which means more enemies dropping from the branches and more of the grasshoppers. You should also be able to use this area as a handy means of refilling any energy you may have lost. Then you've arrived at the most dangerous portion of the stage. 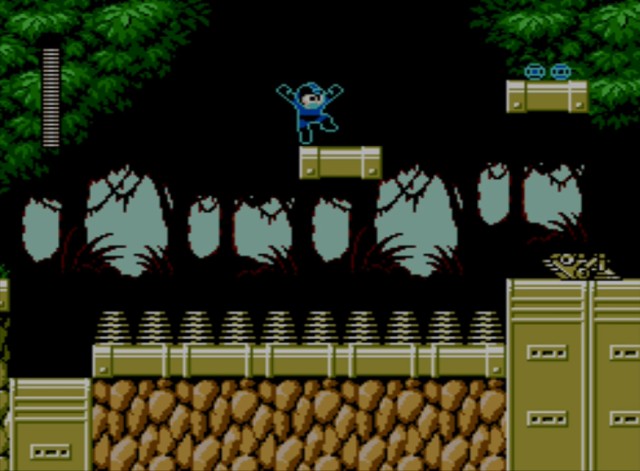 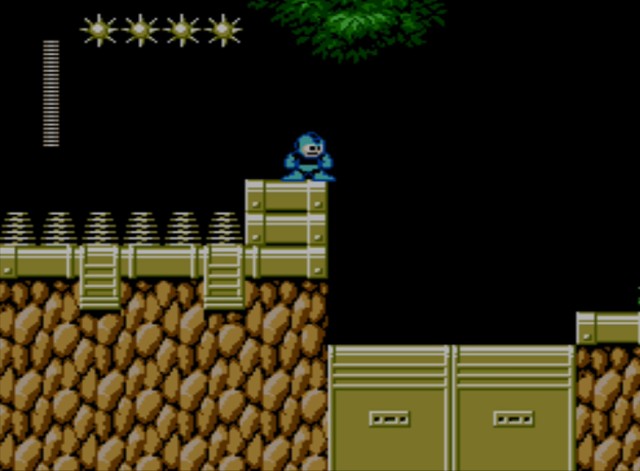 Notice the springs here. When you first jump on one, it will send you flying fairly high. Then you can walk along the series of springs and will automatically bounce at a moderate height. Or you can hold the jump button and launch yourself quite high. As you advance, you'll need to take advantage of both techniques.

Start by eliminating the nearest grasshopper robot, and then another one to the right (along with a foe that descends from above). Just to the right from there, more springs are positioned beneath a row of floating spikes. Jump on the first spring and let its effects wear off. Then you can safely continue right--without jumping--and will not see your bounce carry you high enough that you brush against the spikes. Defeat the enemy and continue forward. 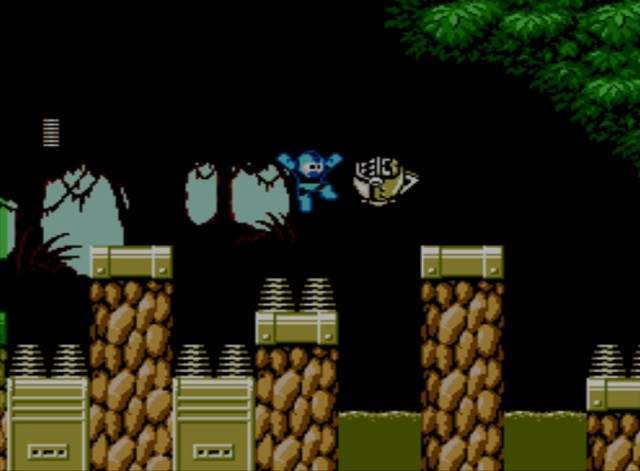 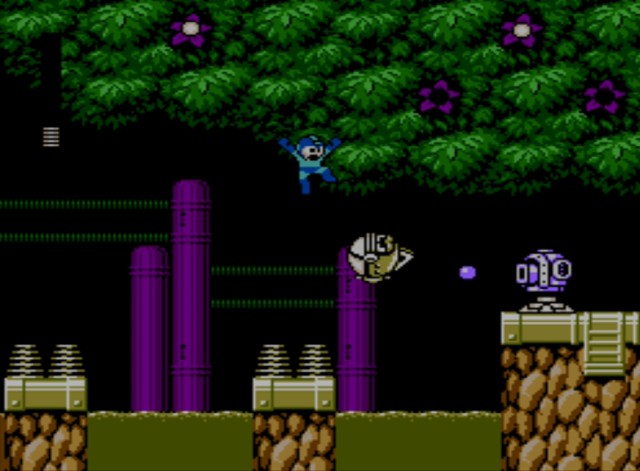 The next hazard is another mini-boss, who you can defeat using the same strategies that worked for you last time. Then you can proceed to the next screen.

Here, past a cannon that is easily eliminated, you'll find the first of several murky pits of water. They are positioned between ledges, most of which are lined with springs. When you try to leap from one ledge or set of springs to another, you'll often face fish that jump out from the watery openings. To safely advance, you need to pause ahead of each opening and see if a fish jumps out. Assume a fish is waiting to leap out from between each such gap, even if said gap is in the middle of a wide body of water. Wait for the fish to do its thing before you quickly follow up by leaping to the next set of springs or the next ledge.

Use that strategy to carefully make your way along the series of ledges, and be ready to hit flying enemies with charged shots, too. Remember that holding the jump button will ensure that you jump as high as you need to, rather than having to guess, so I advise doing that as you proceed. You'll also have to shoot purple floating ledges, which look like clenched fists, to make them open so you can hop along them. It can be a bit overwhelming at first, but the good news is that the door to the boss chamber waits on the far side of the lengthy gauntlet. Whew!


Although your battle with Plant Man will likely prove challenging at first, he does have a pattern that is fairly easily exploited, and you can do a lot of damage by hitting him with the slow-moving B. Attack move. 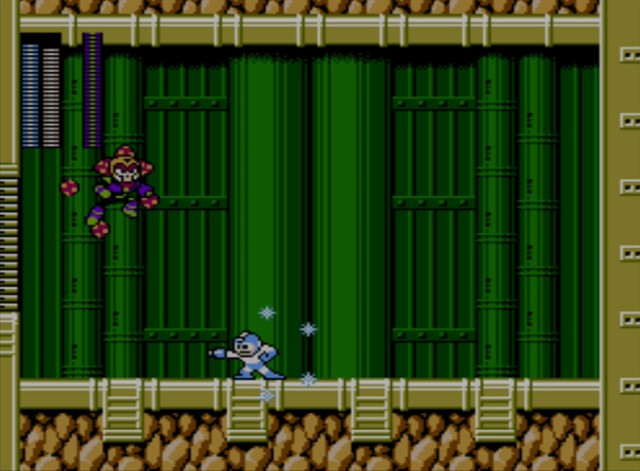 When the battle begins, Plant Man will likely take a huge leap toward you. What he likes to do is jump against a wall, then rebound from it and land around a quarter of a screen width away from whatever wall he touched last. Then he'll immediately throw his plant shield in your direction.

As that shield flies your way, be ready to leap over it and in the direction of your foe. Then hit him with either a charged arm cannon shot or the ice attack, and then be ready for the same pattern to repeat as Plant Man heads back toward the nearest wall. You might have to fight him a time or two before you get the hang of it, but once you do, the fight should be quite simple. Plant Man is actually one of the easiest of the robot masters.