This stage has one of the most difficult challenges featured in any of the NES installments in the franchise. It's demanding even when you know what you're doing and have lots of practice, so brace yourself. 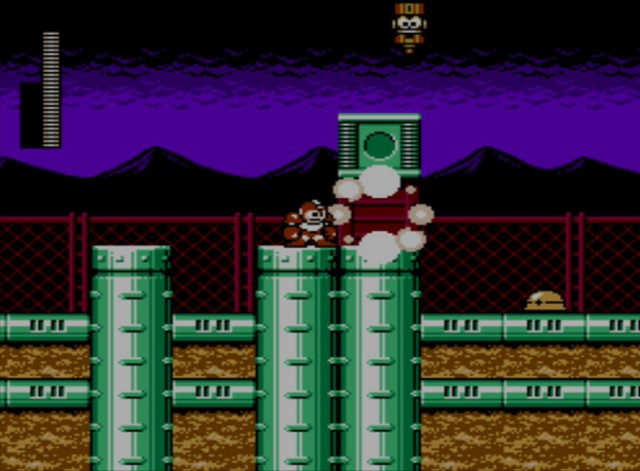 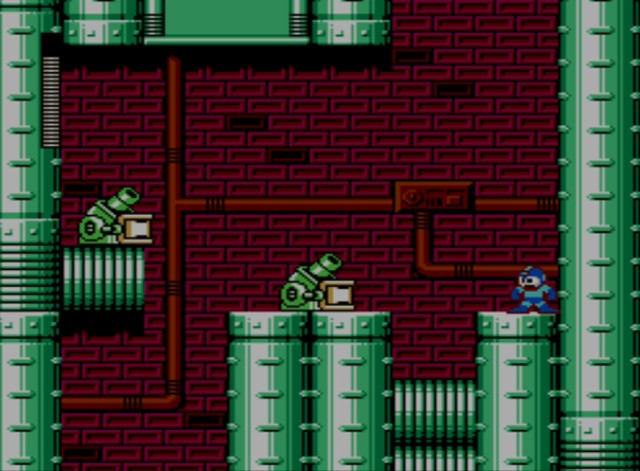 In the first area, equip the power suit and start toward the right. It works well on the hardhat enemies, but you can also used charged shots to eliminate the orange crates that you'll encounter along the way (one of them will reward you with a 1-up icon for your trouble). Enemies also fly through this area, periodically dropping flames, so watch for those while dealing with the hardhat foes. On the far right side, you'll finally have to use the jet to fly up and over a barrier (where a hardhat is perched) before dropping through an opening.

As you drop through the opening, veer left. Switch to your normal suit and power up your arm cannon as you face left. There are two shielded turrets to your left. Wait for the closest one to lift its shield and then let loose a blast while jumping to avoid its shot if necessary. Then repeat the process for the one further across the room. With that done, you should steel your nerves, because most of the rest of the stage is considerably more difficult. 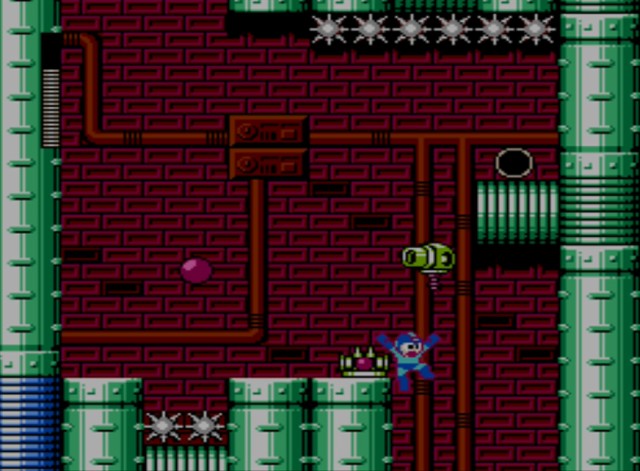 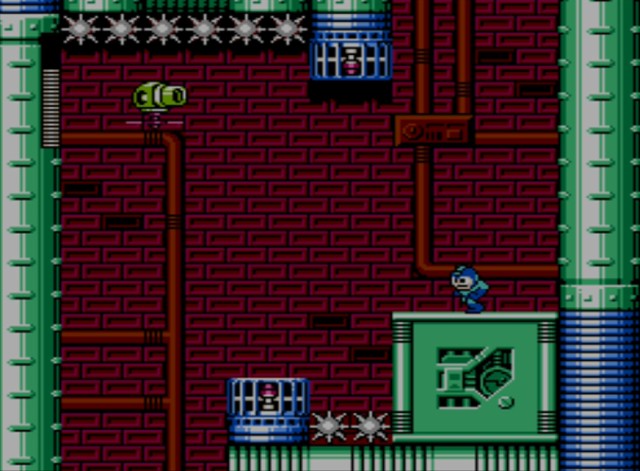 Now you should make sure that you fall straight, so that you land on a large green block. To your left, there are spikes, fans, and a floating cannon. Charge your shot and then jump and unleash it as the cannon is nearing the lowest point of its descent, so you can take it out of the picture. Now you need to jump left over the spikes and keep moving left to drop through the next opening. If you hesitate, one of the fans may below you into spikes, but otherwise there's no reason to worry. 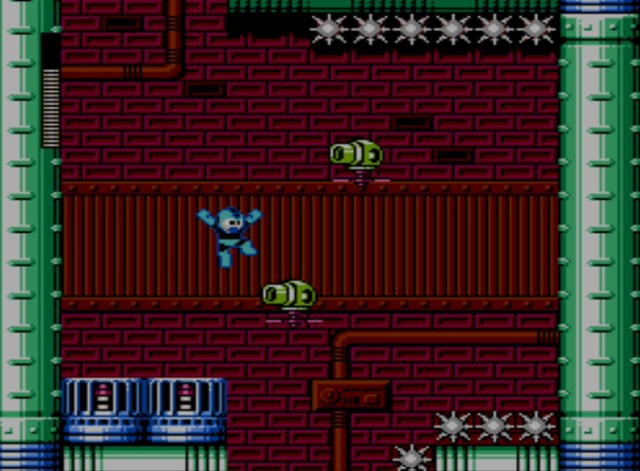 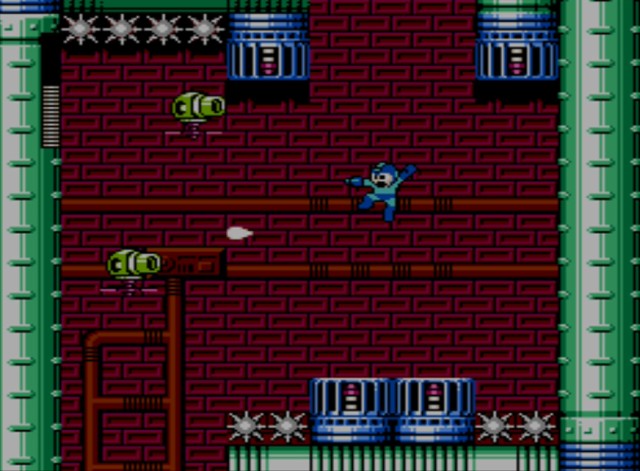 Now you should arrive in a screen with two fans positioned along the floor. There are two cannons floating to your left, so disable them with charged shots. It usually works best to hit the lower one first, then charge up a second shot for the higher one. Don't drift off the two fans based along the floor, as other fans could blow you into spikes. When you have eliminated the cannons, jump over the left set of spikes along the floor, and drop through the opening to a new ledge. 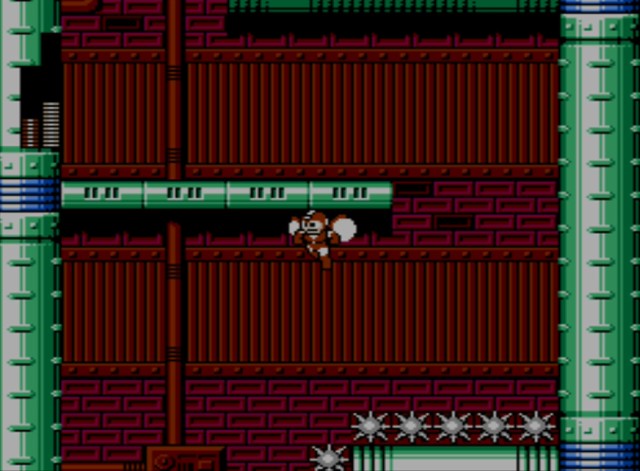 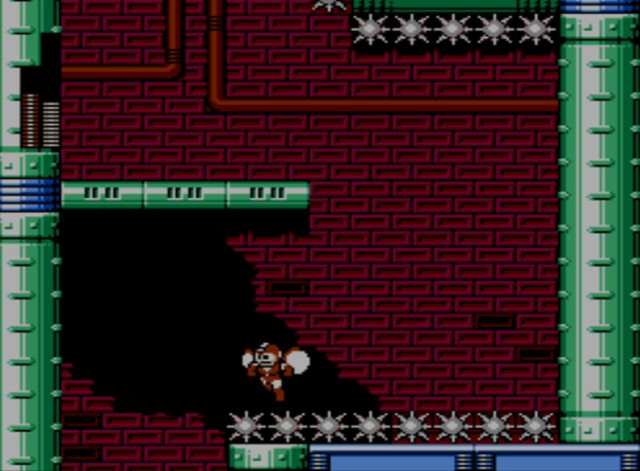 This is where you'll need to proceed with extreme caution. You are on a ledge with an enemy sitting in a turret. Blast him, and then you have time to pay closer attention to the room. There are spikes nearly all around it. You should switch to the jet suit, and what you have to do is jump off the end of the ledge, then press and hold the jump button just about as you come even with the ledge from your jump. Hold left as your thrusters kick in, and if you timed it precisely right, you'll just barely avoid grazing the spikes as you veer left and fall through an opening.

The next screen is basically a repeat of the same challenge, but with a few more spikes added into the mix. Repeat the process that worked the first time around, and with luck you will manage to drop through the second opening. 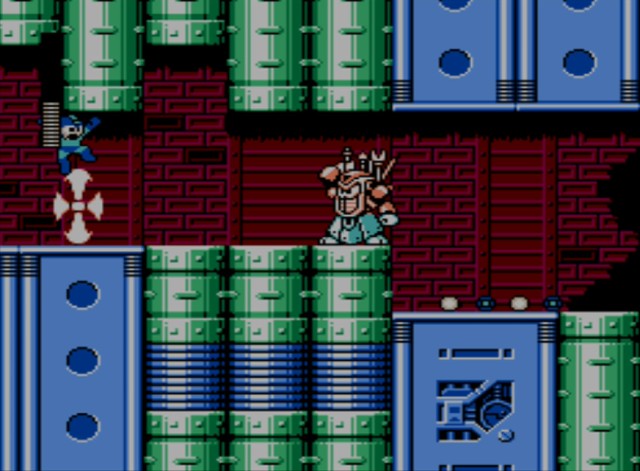 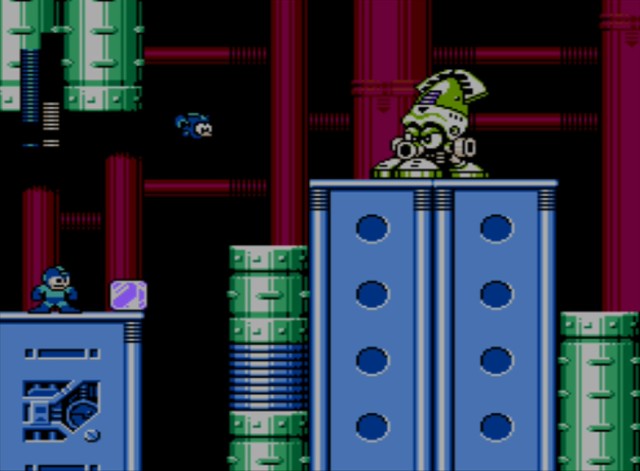 Once you clear those back-to-back nuisance rooms, the stage doesn't have much left that should pose a challenge. You'll drop into an empty corridor, and then you can run right through another empty room. Here, you'll finally face another spear-wielding foe, and in tight quarters, too. Charge your shot and wait for him to throw his spear. Leap over it, then blast him. Now, repeat that process a few more times and you're good to push onward from there to the next screen. Collect the energy pellets on the way, if needed.

On a ledge ahead of you as you arrive in the new corridor, there is one of the giant squid-like robots that sends out ice blocks and homing missiles. If you're in a hurry and want to play it safe, send Beat to take care of him. Otherwise, eliminate him with charged arm cannon shots or special weapons from the ledge to the left. Then advance to the next screen, where you can shoot another enemy in a turret a few times before passing through the gate to face the area boss.


There are a few strategies you can use to defeat this guy, but your best bet is probably to equip the Y. Spear weapon. 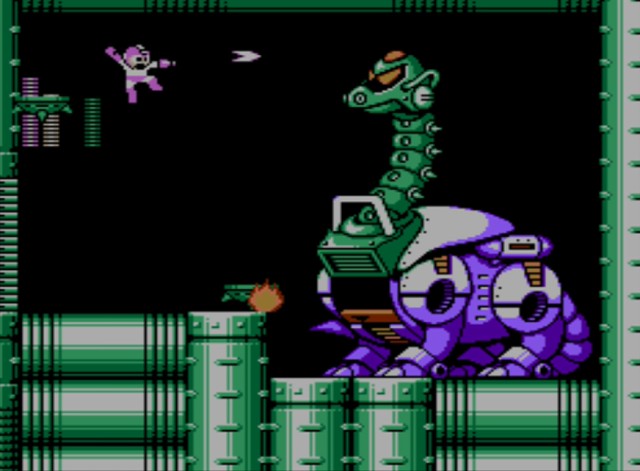 As you enter the room, you'll find yourself facing what looks like a robotic dinosaur. His eyes are his weak point, but they're too high to reach from your level. Fortunately, small platforms will periodically appear, near the monstrosity's belly level. You can hop on one and ride it toward the upper left, where it will blast into pieces. Before it does, jump out and toward the right. Fire a shot at the right level, as you fall.

If you time it right, you can land on the next platform in the chain and repeat the process. Usually, four or so platforms will come at once, in rapid succession, before you'll have to wait a bit for the next batch at ground level. The robot will occasionally breathe flames, but you shouldn't take too many hits if you get good at your timing. If you run out of spears, you can also try using the tomahawks, or even the B. Attack special weapon, but it's clear that the developers intended for you to use the spear. Why disappoint them?