You're almost ready to face Mr. X. He waits for you at the end of this stage, but getting to his chamber will take some real determination. There are quite a few lethal hazards along the way. 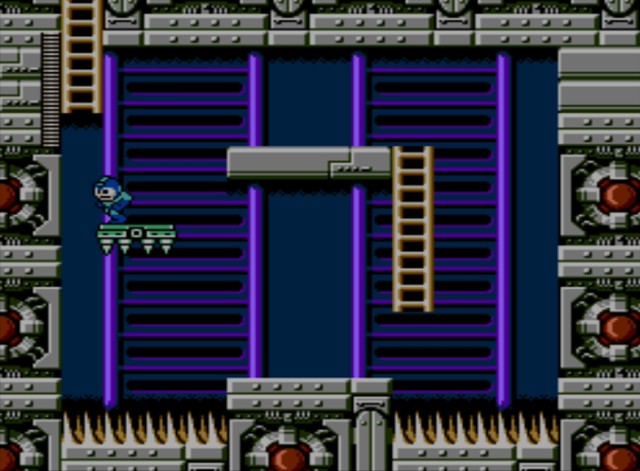 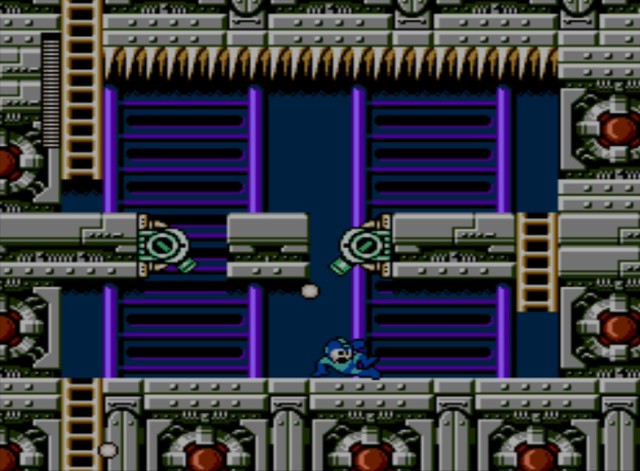 Start by climbing the ladder just to your right. Then hop to the green platform just to your left, with spikes hanging from its base. Hop quickly again, this time to the ladder to the upper left, as the platform will turn once you land on it. Climb the ladder into the next room.

There are two cannons mounted here. Run to the far right side of the room, then stand beneath the ladder. Face left, and you can jump and shoot through the walls to easily destroy the cannons without making a perfect target out of yourself. Then head back left along the room's lower level and fly up through the left gap using the jet suit. Use that ladder to advance to the next screen. 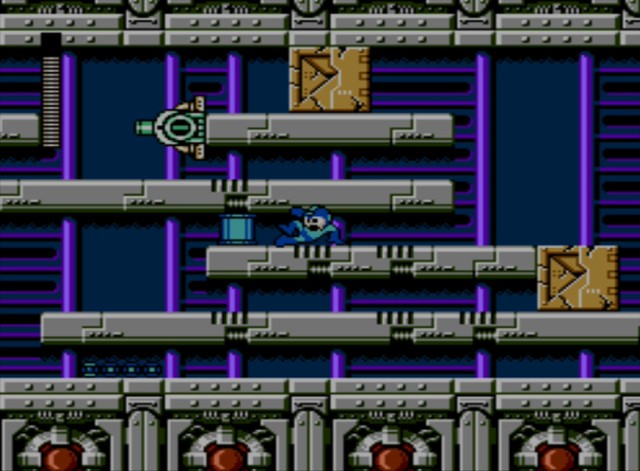 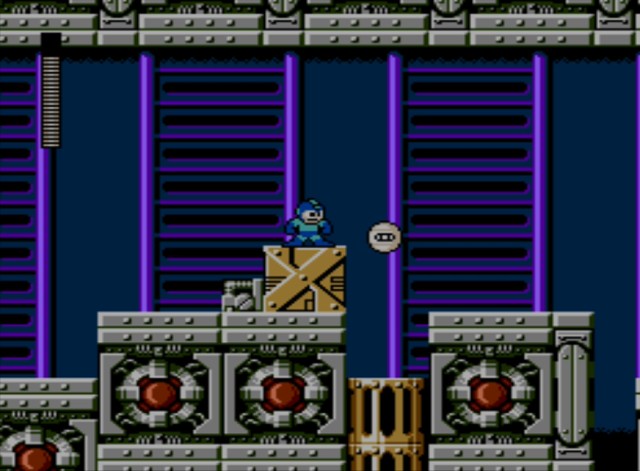 As you head to the right here, you'll find more cannons mounted along lengthy ledges. Destroy them however you like and climb to the top level, then move to the right on the second level down (below the level with the blocks). Destroy the cannon, and then drop down and use the power suit so that you can break a block and collect an obvious E-tank, if you need it. From there, continue to the right again.

As you advance, you'll see orange cylinders between the large blocks from which the floor is built. These are dangerous, so pay attention to them now. What they do is fire a slow-moving orb that rises vertically, reaches its peak, then reveals itself to be a bird that will shoot at you and dive toward you. Let this particular one rise high enough that you can blast it with a charged shot, then move quickly onward. 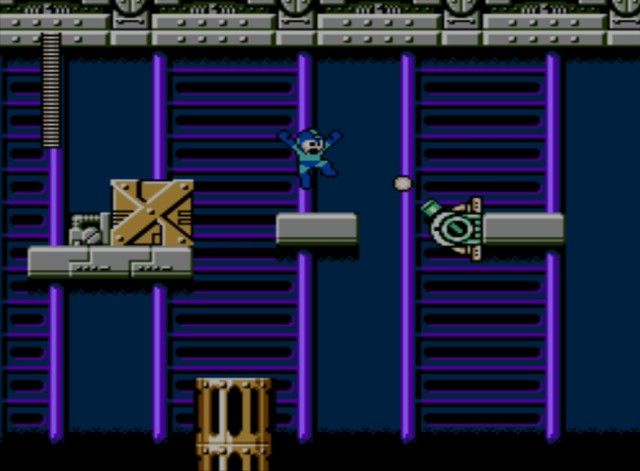 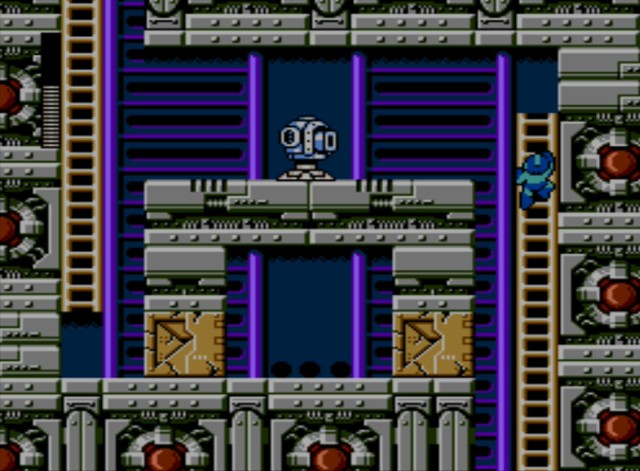 You'll next start across a bottomless pit. There are raised platforms you can move along, and you need to proceed cautiously. Between the first pair, another of the bird-producing cylinders is situated, and there is a cannon just beyond that. Take out the next bird that appears, then the cannon as you keep moving. Then leap to another ledge and deal with more cannons and cylinders as you continue your advance. Remember that once a bird has launched, you are safe to briefly hop onto the cylinder and use it as a platform, but be careful not to linger for long.

Above the last cylinder, you will find a ladder you can climb into the next room. Do so, and climb toward the top. From your perch on the ladder, face left and fire at a cannon positioned on the ledge. You can do so without putting yourself at risk, if you do it right. Then drop onto the ledge. If you want, drop down and use the power suit to destroy the blocks and collect three small energy capsules, then climb the left ladder to reach the overhead corridor. 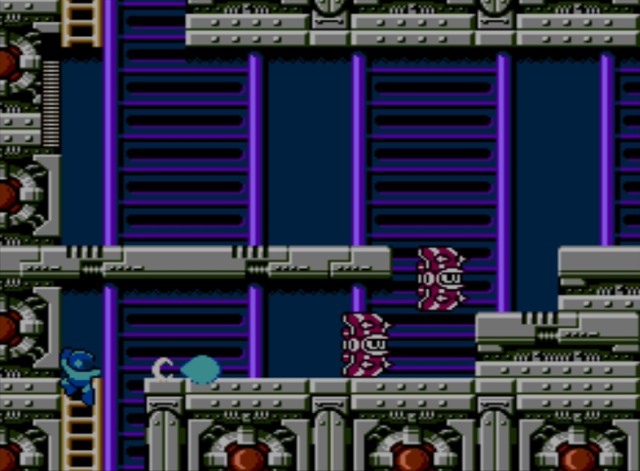 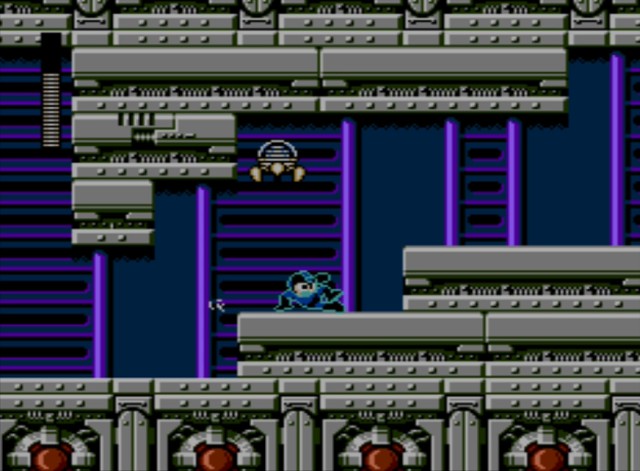 Don't climb to the top of that ladder just yet. Let an armored enemy race toward you and then turn around and start back in the opposite direction. Then jump up and shoot it in the back with a charged shot before starting back down the ladder again. Repeat as needed, until that foe is toast. Then you can hit the other enemy in the back from a safe vantage point, as well. After that, fly up to the barely visible ladder and ascend to the next room.

As you make your grand debut, a jellyfish-like enemy will approach on the ceiling. There are lots of those robots in this area, so watch for them on ledges and on the ceiling as you advance. Take them out carefully and keep going. Keep in mind that some of the blobs will pace back and forth a bit, then stop where they are. Stand at a safe distance, as they will self-destruct. Then you are safe to proceed again. As you advance, you'll soon find a 1-up icon, and shortly after that, you will reach a shaft that you can use to reach a lower chamber. Do so. 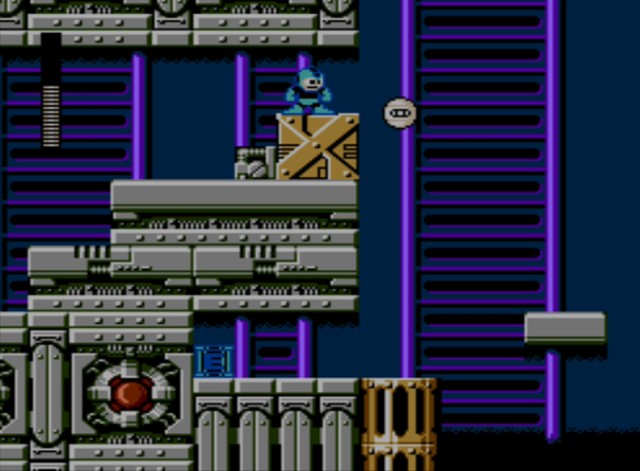 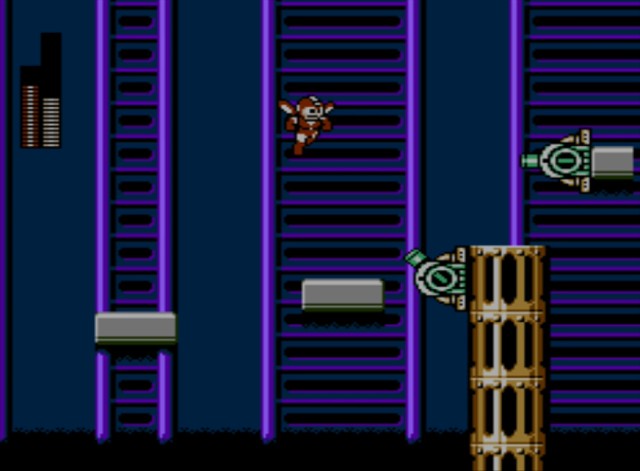 You'll find nothing of interest in that chamber, so drop through another opening and start to the right. You should spy an E-tank sitting on a ledge. Climb the platforms positioned above it and you will find yourself standing on an orange block. A cylinder is below, so let the bird rise to your level and then blast it out of the sky. Now you can drop down and collect the tank before continuing to the right.

Here, platforms hang across a bottomless pit. You are at the edge of one of the most challenging areas in the entire game. There are numerous cylinders here, and cannons, and they're all good at knocking you into the abyss. Equip the jet suit and use it to move from ledge to ledge. Try to take out cannons whenever you can, to minimize your risk as you advance slowly. There's a bunch to deal with at the very far side of the chamber, but you should be fine if you don't rush. Remember that if you are flying and take a hit, you'll most likely drop straight into the pit, so clear the way before you move.

Finally, you should reach solid ground and can pass through the gate to find Mr. X.


You can face Mr. X with the jet suit equipped, or in just your normal attire. I recommend the latter option, actually. When you enter his chamber, make sure you retreat to the far left wall and then stay there. All you will have to do is occasionally jump and shoot and you should win the fight without taking more than a hit or two. 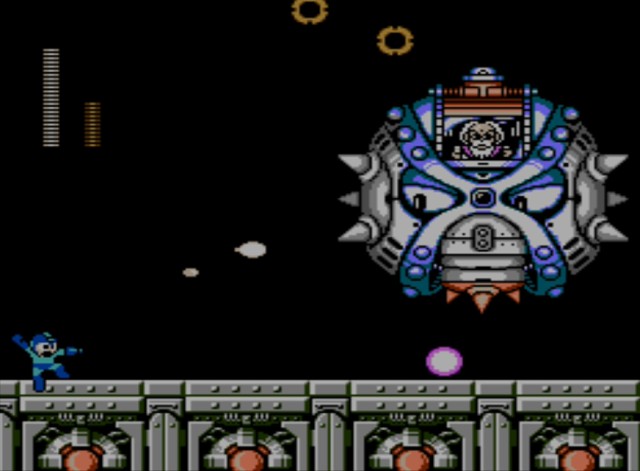 Mr. X appears near the center of the screen in a floating pod. It serves as the bulk of a giant pendulum, and has spokes positioned along its sides. It will swing back and forth but shouldn't reach your location if you time your jumps mostly while it is swinging in the opposite direction and keep them brief.

The pod also will drop large orbs of energy, which split and fire in both directions, but you can hop over them and keep charging and releasing arm cannon shots to hit the giant metal head whenever it is convenient. This really is an easy battle, once you get the hang of it.