This stage is remarkable because it contains not one but two E-tanks. If you ever need to stock up, you can easily return here and collect a couple in each run, until you are carrying the maximum of 9. 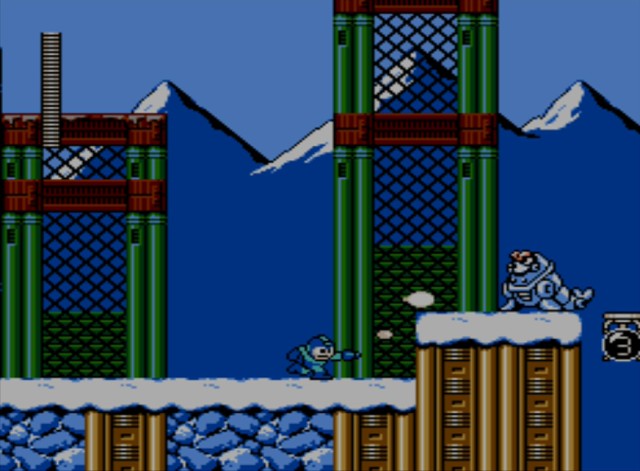 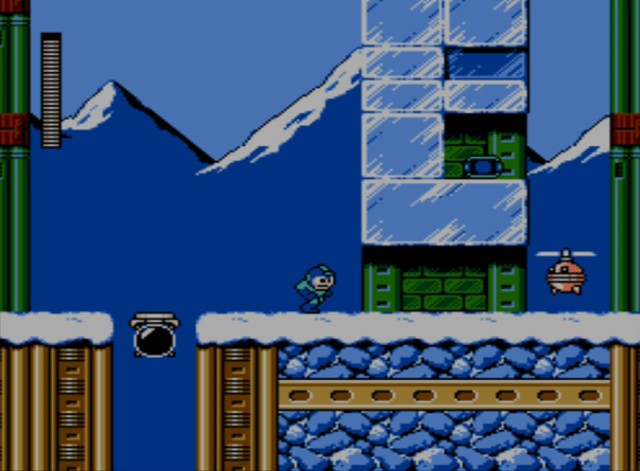 Start to the right and the first enemy you'll encounter is a robot that resembles a walrus. You will need to use a couple of charged shots to clear these guys out of your way, and in the meantime they will throw large snowballs your way. Be ready to evade such shots, especially if you're not quick about defeating the enemies.

As you push forward through the walrus-infested opening area, you'll also find numbered platforms. These will count down and explode, once you touch them, so you want to move fast after touching any of them. Another hazard in the area are orange flying enemies, which can't be damaged until they extend to reveal a face. Shoot them in the face to deal damage and swiftly eliminate them. 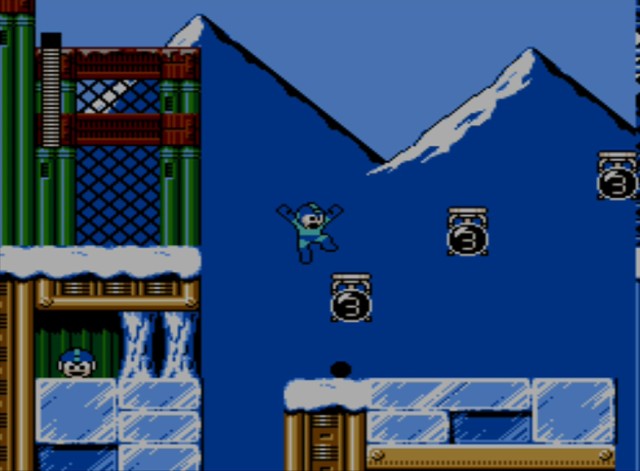 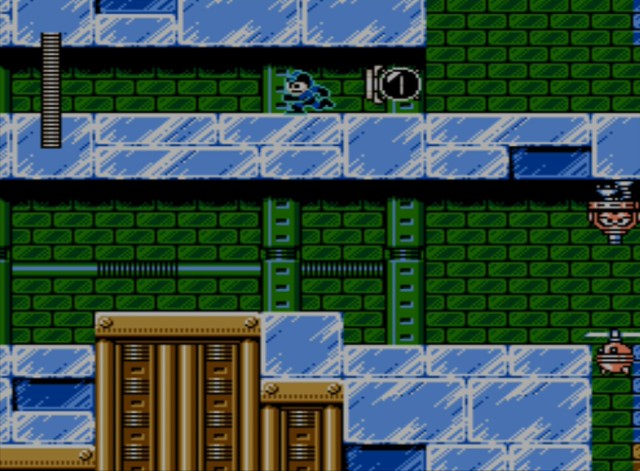 Past a set of two walruses, you'll continue along a ledge and notice a 1-up icon, behind some frozen columns. You can thaw the columns with your flame shot, though it's not necessarily worth the risk in this case. Just keep pushing onward, hopping along the exploding platforms to reach a high ledge to the right. Here, you should nudge a timed obstruction, then back away while it explodes. Then you can grab the energy and repeat the process on a second such obstacle.

Continuing onward from there, you'll drop into a pit. If you hold left here, you can land in a nook and probably take some damage from an enemy before you break apart an icy block (I believe the power suit is required) for an extra life. Again, it's not really worth the bother. My advice is to just go ahead and fall along the screen to the next chamber. 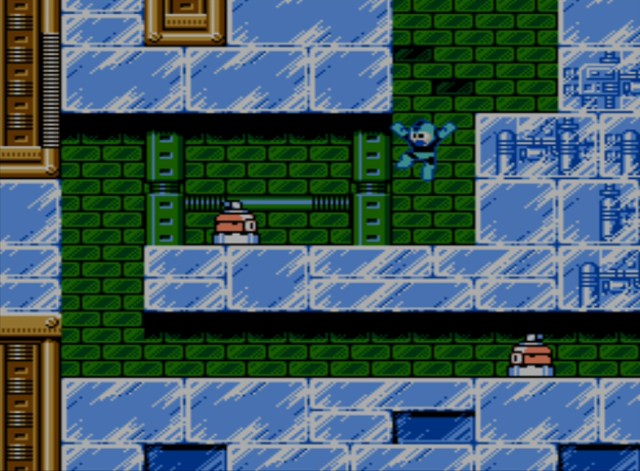 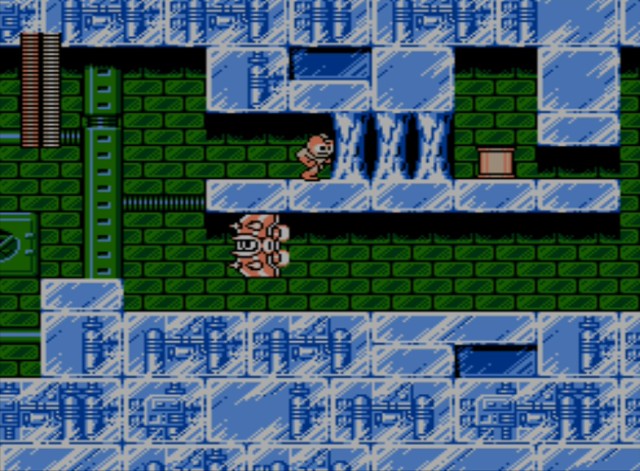 Drop quickly left here and take out a sliding enemy as it approaches. A few quick shots will do the job. Then you can drop down again and head right after eliminating another such enemy. In that direction, you'll next come across a flying armored enemy of the sort that debuted in Mega Man 4. You can only hit it when its back is turned, so let it come your way and then start in the opposite direction. Follow it and hit its exposed backside with a charged shot or two.

Continuing right, you'll find several more such foes. It's important not to hurry here, because the surface is slick and it's easy to slide into an enemy you are trying to surprise. One thing to watch for is the stage's first E-tank, along the upper ledge, which you can only reach if you melt it with Flame Man's special F. Blast weapon. Then there are a few more enemies to avoid and you can descend a ladder. 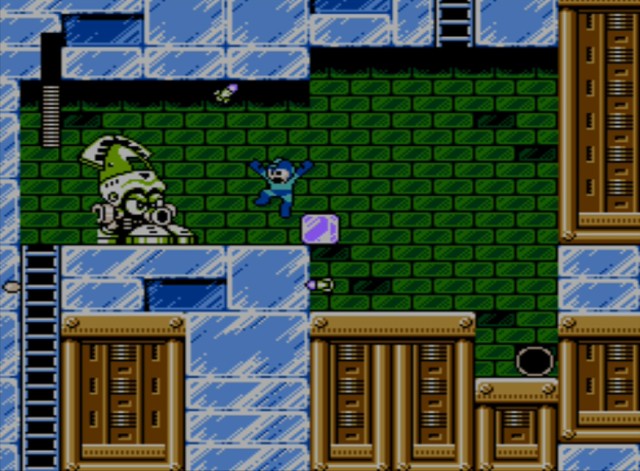 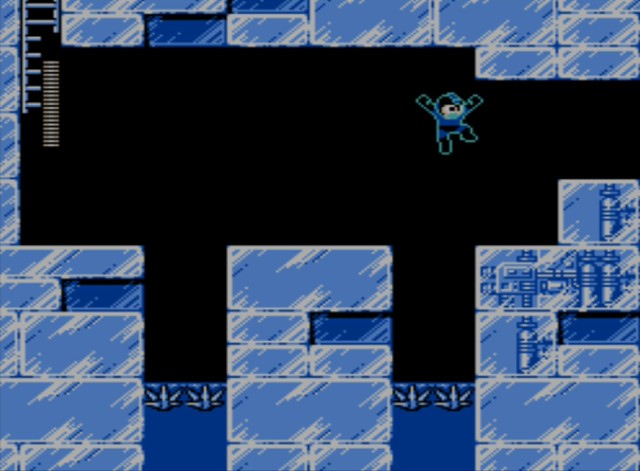 The enemy waiting in this next room is capable of taking a lot of abuse before he will die. He sends ice blocks out at his base, which you should jump to avoid (they don't look harmful, but will inflict damage if they touch you). He also fires homing missiles, so it's important to hit him with a few shots in a hurry and minimize the amount of time he has to make life difficult. It actually works best if you stand on the same ledge where he is perched and just let loose a barrage of standard shots, which will also take out the ice blocks.

Defeat that guy and descend a ladder to arrive in a lower icy chamber. This is the stage checkpoint. There are two watery pits with spikes, and further to the right waits the stage's set piece: a giant submarine, resting in a sea of spikes, with manned turrets. 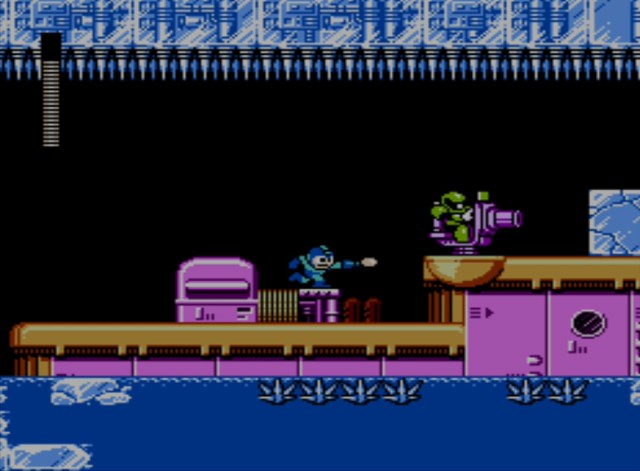 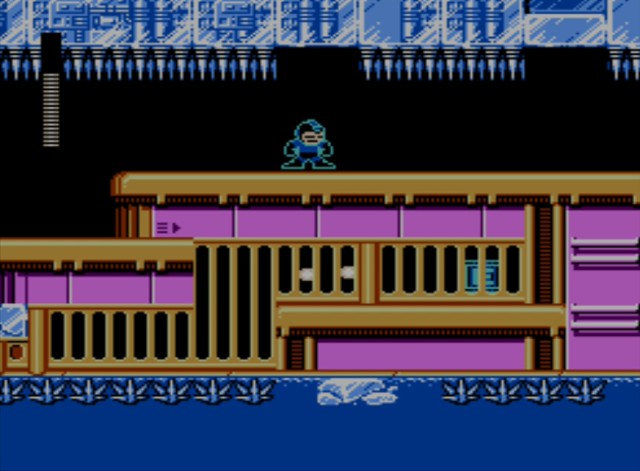 Push to the right and keep a watchful eye on the water and on the spike-lined ceiling above. The submarine's elevation rises and falls, and you have to make dashes to safety when you are safe from the spikes. As you do, charge your arm cannon so that you can hopefully inflict damage on the armed turrets I mentioned. They will withstand a good barrage before they fall apart.

As you proceed, you'll notice a lower path that is especially dangerous. An ice block is positioned ahead of it, and you'll need to switch to the power suit. Charge a shot, then drop down to the level of the block when it it is safe. Quickly destroy the block, then hop back to the left and return to your normal suit, since you need to be able to slide. Then, when the way is clear, you can jump down again (usually, just as the wooden floor is about to emerge from the spikes) and slide to the right to snag the stage's second E-tank. Then return left and continue along the sub's roof. You'll have to pause between sets of spikes, since there's very little wiggle room. 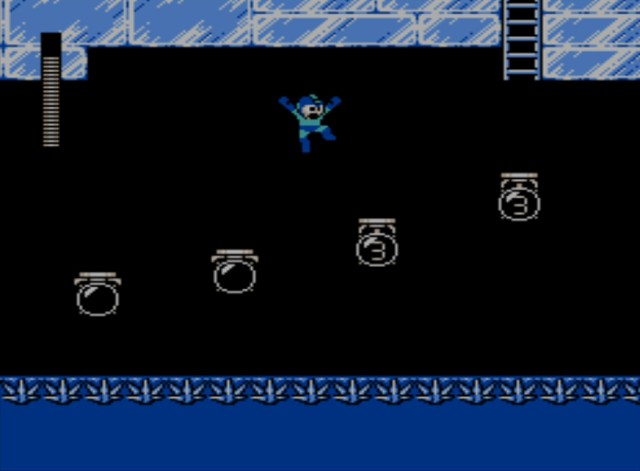 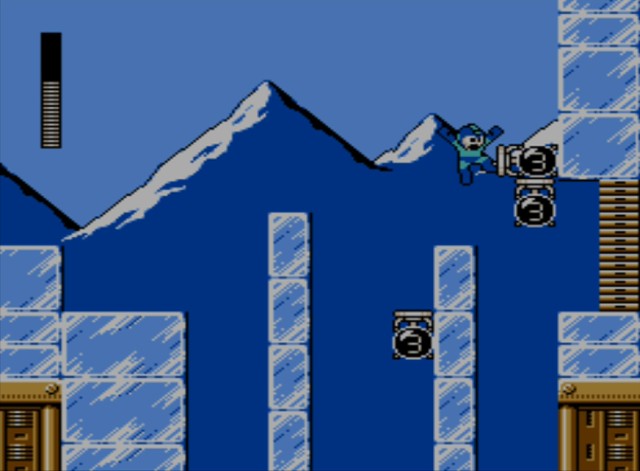 When you reach the far side of the sub, you'll have to hop along a series of timed ledges to reach a ladder. Don't jump too far right from the last of those, as you'll hit your head against the ceiling rather than grabbing the ladder's lowest run.

When you reach the ladder, climb it into the next room and cross more of the timed ledges to reach yet another ladder. Then ascend to the next area, where another of the squid-like enemies will send ice blocks and missiles your way. Defeat him and push onward to find the entrance to the robot master's lair.

Before you can enter, you have to negotiate a tricky trap. Jump onto the first timed block, then up to the ice column just to its right. From there, jump to the second ice column. Now jump right and nudge the top of the two timed blocks, before falling back left to the ice column. You may slide off it if you're not careful, which will trigger another timed block. You can jump back up to the ice column if that happens, though. Then hop right and land on the remaining timed explosive ledge that is positioned at the base of the right wall. Once again, quickly jump left to the ice column. If you stand on the ledge, it will detonate and you'll take damage and fall into the pit. You need to activate it, then stand at a safe distance. Once that ledge is gone, you can safely hop to the familiar gate and proceed to face your local nemesis.


This region's boss can put up one heck of a fight. Predictably, he's weak against the F. Blast attack, but that move drains its meter quickly and you may have to finish up with charged arm cannon shots if you're not careful. 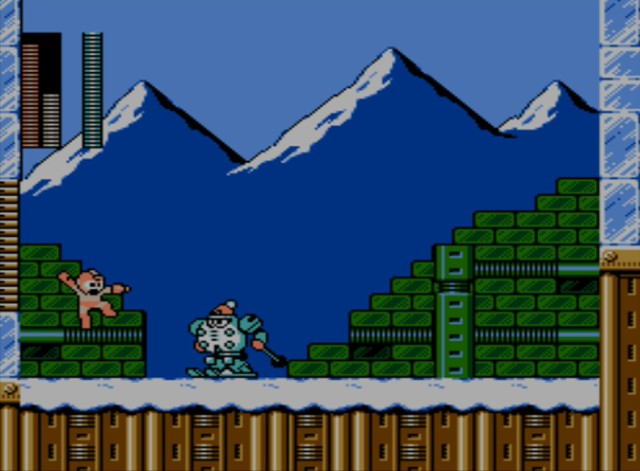 As the fight begins, Blizzard man packs himself quickly into a tight snowball and rolls toward you. When he's rolling, he can do a lot of damage but is impervious to your own shots, so be ready to jump that initial rush and then respond with fire.

Unfortunately, Blizzard Man rarely stops rolling. You'll have to get in some quick shots and be ready to jump out of the way again. He likes to trap you in a corner, also, where it's difficult to get clear without taking still more damage. Don't let him do that, and be careful of his snowflake attack, which causes lethal bits of ice to converge on your location. The best trick is to keep moving, keeping mostly near the center of the screen and hitting him with flames or charged shots during the brief moments when he pauses after a rolling attack. Don't be afraid to use an energy tank if you need to.