This stage, which takes place in an oil field, can be quite dangerous if you let it, as you'll soon see. 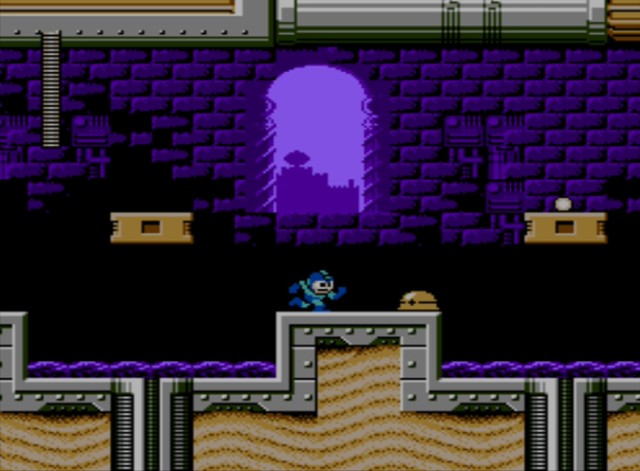 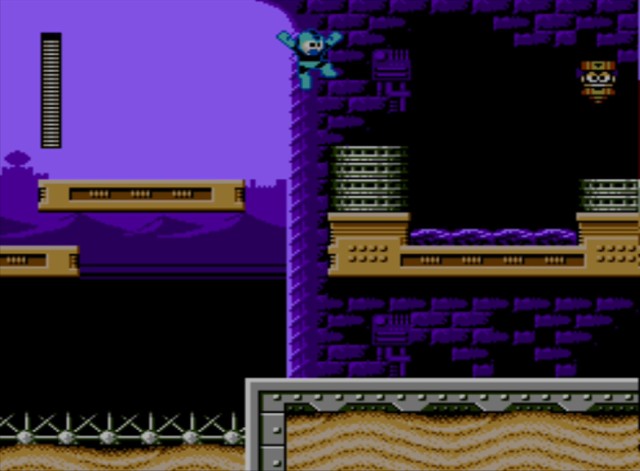 Start toward the right and you'll see purple sludge lining lower platforms. This represents oil, and you'll want to keep it in mind. As long as it is purple and black, you can safely walk across it with no ill effects. Take out a hardhat enemy and leap along a few ledges, tending to more of them.

As you reach high ground here, there's a high ledge with a concrete block. You can destroy it if you have the power suit. Otherwise, slide under it and push right to let your momentum carry you over a pit. Now as you keep going, you'll see some flying enemies. They're easy to eliminate with charged shots, which is what you want to do in a hurry. Otherwise, they'll drop flames. Those can hit oil and will instantly set it ablaze. Once lit, an oil pool is fatal if you touch it, and it will remain lit even if you lose a life and try again. 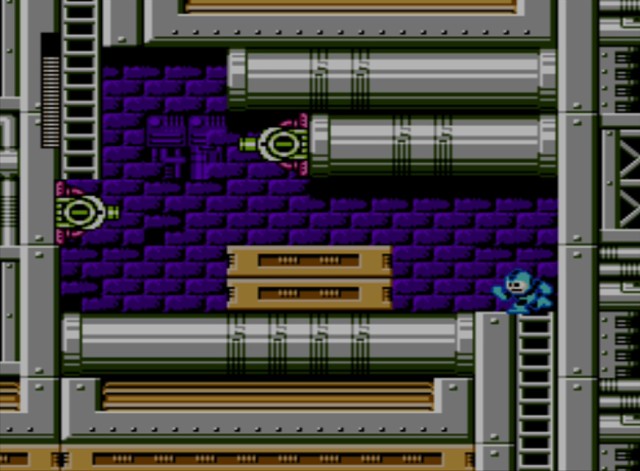 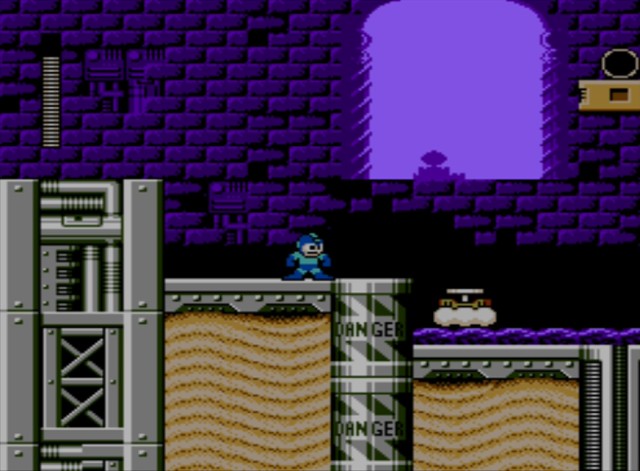 Hop along the ledges near the room's upper side, killing any flying enemies until you reach a ladder, which you should climb into the next screen. Here, there are cannons mounted along the wall. You can eliminate them with charged shots. They periodically fire shots and track your movement to a certain extent, but they aren't especially dangerous.

Climb the next ladder and you'll find a new type of foe. This one is heavily armored. Shoot it with a charged shot to knock it back. If it lands on solid steel, it will burst apart and is done. However, you can keep going to the right and knock such enemies into the oil, which will turn them into ledges you can safely ride to the right, even if a given field catches on fire. That's handy. The trick is to remember that each jump will cause the enemy to move slightly in the direction you are facing. So keep that in mind as you advance. 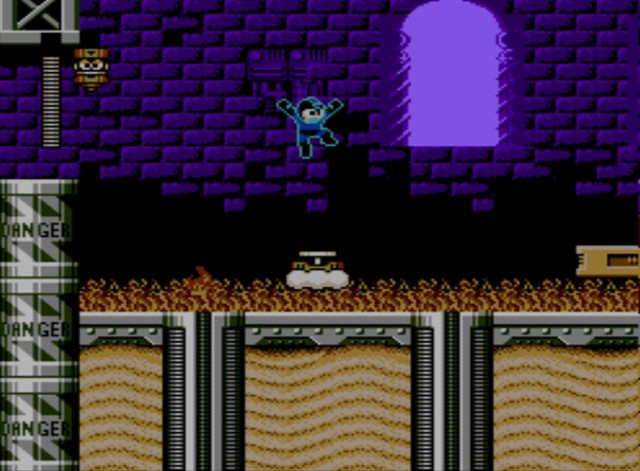 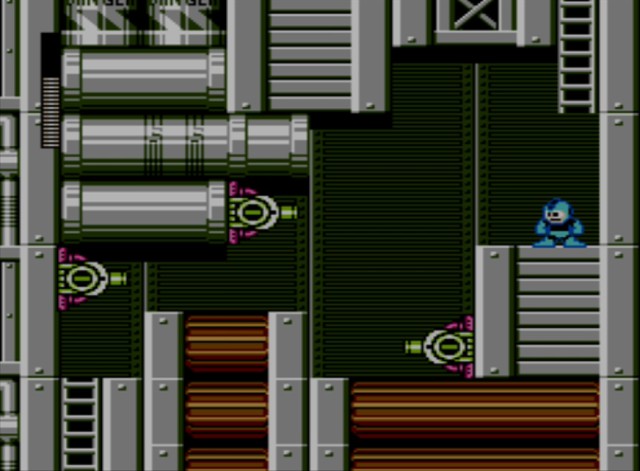 As you move toward the right, you'll eventually face some of the flying enemies. There's virtually no chance that they won't set the wide field on fire, but you're fine as long as you keep your moving platform around. Keep going, using such platforms as necessary. Sometimes, you might knock a platform into the oil and it will disappear off-screen, so that you can't see it even when you advance. If that happens, just ride your previous platform back to the left and right again, and the enemy should reappear.

When you reach the far right side of the area, descend the ladder to arrive in a room with three wall cannons. You can take out the first one from the ledge positioned at the base of the ladder, then charge your arm cannon before heading quickly left and pelting the leftmost cannon. Descend the ladder after that, without even worrying about the third cannon (unless you think it might drop a useful item). 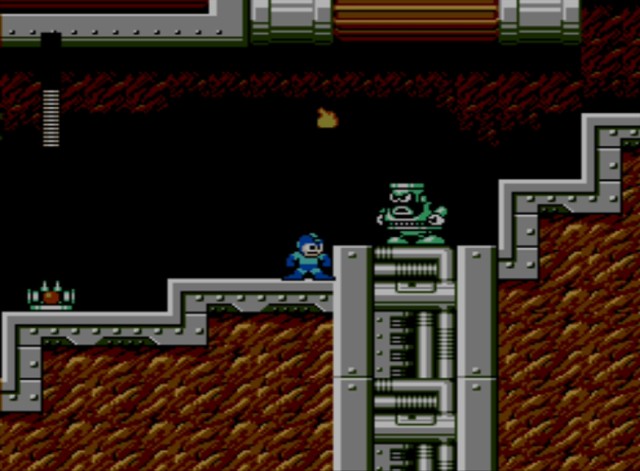 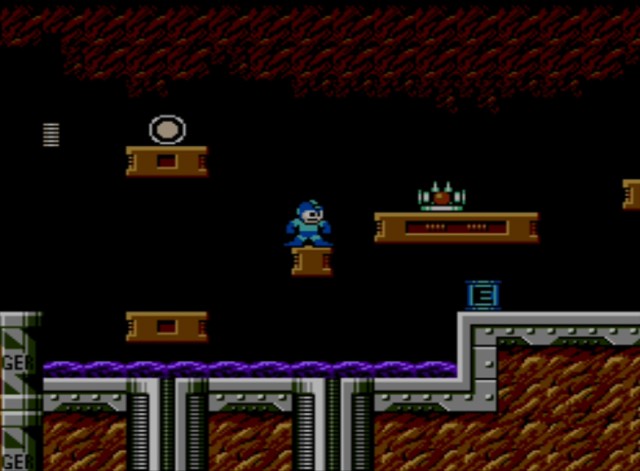 The room that waits below is another lengthy chamber. You'll find a roving metal blob with spikes, like you may have encountered previously in Wind Man's stage. Past that, there's another new enemy. This guy likes to throw flames, and the shots can set oil on fire, as you might imagine.

Continue right, taking out enemies before they can make the area more dangerous than it has to be. There are a few pits and some ledges to leap along while you dispatch of your foes, and then you'll find an E-tank sitting out in the open. Grab it, even though doing so is slightly risky, and keep going right from there (while sticking to high ground and pausing to let enemy shots clear out of your way) to reach the door to the boss chamber.


Flame Man is tricky because he does a good job of making himself difficult to hit. You should be attacking him with the W. Storm ability that you gained by defeating Wind Man, but that won't do any good if your shots don't connect. 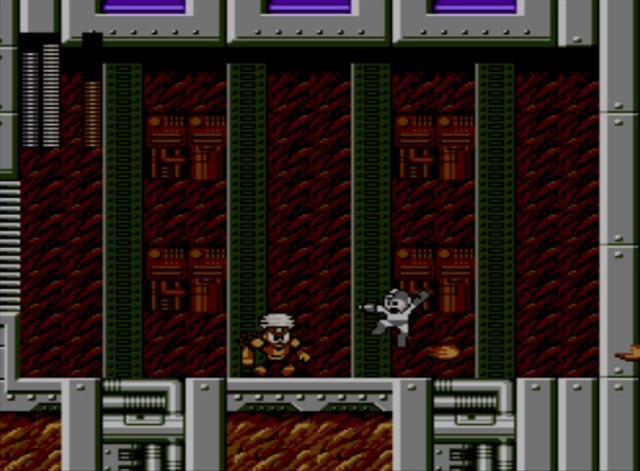 When the battle begins, Flame Man will typically send up several geysers of flame. These will damage you if you brush against them, but their true purpose is to shelter the robot master. It's difficult to get in a good shot or two unless you're able to avoid the geysers and get in close. Then you can usually hit him with two or three quick blasts of wind before it's time to repeat the process.

Besides the geysers, Flame Man likes to make decent leaps around the room, then land and chuck fireballs your way. These are fairly easy to jump and avoid, so you can approach him as you do so and maybe even get in a few quick shots of your own. As long as you have the special weapon handy, the fight shouldn't last long and is fairly easy. If you're stuck using charged arm cannon shots, though, you'll have to survive quite a bit longer and you can afford to make fewer mistakes. It doesn't change the general strategy, just makes the fight considerably more difficult.