There's a point during the main quest in The Elder Scrolls V: Skyrim when one of the characters wants to show you something a fair distance away. She says that you can either follow her and travel together, or she can meet you there later. This means that even though it's supposedly a time critical plot point -- "We must hurry," she'll say -- the plot point will wait until you're ready. Play it now, or play it later. Whenever you're ready, walk there, or teleport there instantly. No matter what anyone here tells you, time and space mean nothing in Skyrim.

Normally, I'd just fast travel and meet her there. But Im at the end of a long night of Skyrim, ready to wind down, but not quite ready to stop playing. So I follow her because it's arguably easier than actually saving and powering down my 360. She changes into armor and tells another NPC to mind the inn that she tends. I'm tempted to get my horse, but I don't want to spoil the illusion by riding down the road while she shuffles along on foot. It's nighttime, which adds a touch of intrigue Bethesda can't have guaranteed, since this could just as easily have happened at midday. As she hurries along the road in her awkwardly animated shuffle, she pulls out a torch to light the way. If time mattered, this could be one of those hurried nighttime journeys to get someplace in the nick of time, maybe to warn a king of an invasion, intercede at an ill-fated princess' wedding ceremony, or call off a doomed dawn attack.

As we travel, the NPC has occasional bits of scripted dialogue along the way. She warns me about a notorious bandit hideout up ahead (not to worry, as I cleared it out long ago). She references a river and a city we'll pass. She gives me a few more pieces of information that I would have missed if I'd just fast traveled later. We come across the member of a holy order of warriors fighting a vampire. We join the fray. My sidekick, a cat person mage who's been tagging along for several quests, gets killed here. I consider reloading the game, but decide that to really appreciate Skyrim, I should just let it happen. He should remain dead and become one of the game's many emergent stories, like this hurried nighttime journey to get there just in the nick of time. As dawn breaks, we reach our destination and a scripted scene unfolds, insinuated neatly into the open world like so many of the game's other scripted scenes. 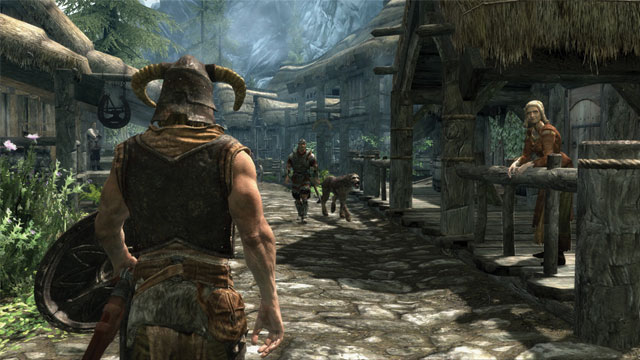 This is Skyrim at its best. When you accept it on its own flawed and often brittle terms. When you look past the FedEx delivery quests, almost all of which come down to going someplace to get a doo-dad. When you let the lore and dialogue and scripting carry you along. When you embrace what it's trying to do instead of scrutinizing what it actually does. When you just let it happen. This is when Skyrim will reward you most richly. Not when you're trying to win, or beat it, or get to the end, or level up, or earn the achievements. Not when you're playing it like a stat-based RPG, or a single-player MMO, or a challenge. Skyrim is putatively a game. More accurately, it's a narrative loom.

Bethesda has been trying this approach for a while, but never in a place as rich as this. The beauty of Skyrim -- the game and the place -- is that it's a combination of variety, thematic unity, and careful use of an aging but adequate graphics engine. Although these are mostly cold hardscrabble plains with patches of snowy waste, that's not all they are. Skyrim is a place of degrees of cold, of lowlands and mountains, of old and new, of cultural and civil strife, of international intrigue. Rivers and stories run through it. Skyrim is every bit as good as Red Dead Redemption when it comes to presenting a varied but thematically unified world, and peppering it with life, activities, and even evocative emptiness. Remember all those cookie cutter dungeons in Oblivion? You won't find Bethesda taking any world-building shortcuts like that here.

But Skyrim isn't just a world. It's also an RPG in which the leveling is almost beside the point. Like so many other things in Skyrim, it happens, but it hardly feels worth chasing. There's very little of the forward pull you get in an RPG with a good character development system. Leveling up is a strange combination of money, crafting, combat, stealth, lockpicking, and almost anything else you'll do. Basically, you just play and it happens. It's more like aging than leveling up. There is nary an experience point to be found of all of Skyrim, but that doesn't mean it doesn't have some of the trappings you expect when you're earning experience points. For instance, the references to monster levels. I learn a spell that only affects enemies up to level 10. How am I supposed to know what level this frost troll is? What are these bandits? Do wolves have levels? Why am I suddenly fretting about this?

The moment you start to approach Skyrim as a game, and at times you can hardly help it, is the moment it starts to get brittle and threatens to crack. As a game, Skyrim is sometimes profoundly broken, and not just because of the occasional bugs and busted AI scripting. This is all too often a frail illusion that will collapse under its own weight, if not the weight of Bethesda's traditionally sloppy testing or their utter cluelessness when it comes to usability issues. Welcome to one of the worst interfaces this side of a Pip Boy. You'd think a game so full of trash loot and inconsequential frippery would put a priority on managing all that detail. Instead, you get to scroll through myriad lists, sometimes while the action is paused with a battle axe swinging towards your skull or a spell poised to leave your fingertips. This is not a fluid experience, much less a graceful one. The hand-to-hand combat is an exercise in flailing, the magic is a list of spells as long as your arm and just as unwieldy to reference, and the stealth is as contrived as ever. This is still an engine clearly built for a first-person shooter, which means archers have it easiest and everyone else just has to make do.

For all Bethesda's ambition, why haven't they gotten better at the basics of moment-to-moment gameplay? This is the same game they've been making since 2002's Morrowind. In fact, you can trace this design as far back as Bethesda's 1990 Terminator game, in which you played Kyle Reese battling the Terminator across an open map of Los Angeles. Has any other developer worked with the same basic idea for more than two decades and still asked you to accept such fundamental compromises as this sloppy melee system, overbearing inventory management, and brittle AI scripting? When so many other issues have been solved, when computers and console systems are finally ready to realize Bethesda's ambitious vision, why do these more pedestrian issues persist? For the most part, Skyrim is a triumph of world building that deserves recognition, praise, and the many hours you'll pour into it. But Skyrim is also a disappointing punt.

If you enjoyed this The Elder Scrolls V: Skyrim review, you're encouraged to discuss it with the author and with other members of the site's community. If you don't already have an HonestGamers account, you can sign up for one in a snap. Thank you for reading!

© 1998 - 2022 HonestGamers
None of the material contained within this site may be reproduced in any conceivable fashion without permission from the author(s) of said material. This site is not sponsored or endorsed by Nintendo, Sega, Sony, Microsoft, or any other such party. The Elder Scrolls V: Skyrim is a registered trademark of its copyright holder. This site makes no claim to The Elder Scrolls V: Skyrim, its characters, screenshots, artwork, music, or any intellectual property contained within. Opinions expressed on this site do not necessarily represent the opinion of site staff or sponsors. Staff and freelance reviews are typically written based on time spent with a retail review copy or review key for the game that is provided by its publisher.