Ill tell you one thing: Civilization V task-switches beautifully. So many more games should take note of the humble alt-tab, and the importance of playing nicely with it. When you switch in and out of Civ, importantly, it never once crashes. And I think thats become my favourite way to play the game.

But lets hold that thought for a bit.

Civililzation, then. Its been five years since the last installment, and a rather astonishing 19 years since the dawn of its original incarnation. Theyre huge and vast games, the very definition of grand strategy. Across thousands upon thousands of years - a single campaign adding up to perhaps a full day or two in real time - youll begin in an ancient world with a tiny speck of a settlement, and expand it, develop it before hopefully winning the game by rising to dominance by the time the game ends in 2050. 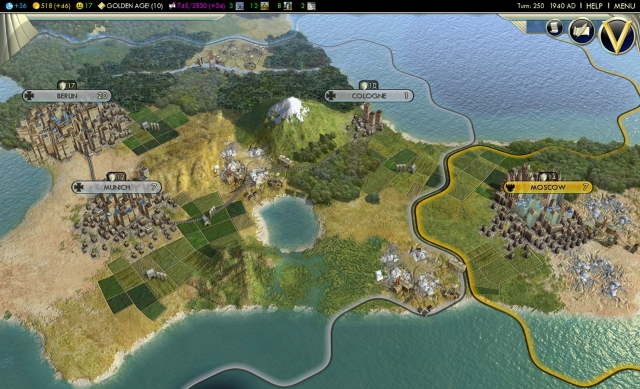 There are several ways you can do this. The most obvious to strategy players will probably be simply crushing your foes. Develop an army, work out how best to position it, and gradually begin to seize control of rival lands. In Civilization V youll face both full-on rival nations and smaller city states, which operate as a sort of semi-sentient filler on the map. Theyll not attempt to expand, and they wont pose too much of a threat unless you really, massively piss them off. But theyre there to bargain with, to bribe for resources, and to generally make things a bit more interesting.

When they are attacked, theyll ask you for help defending against your main rival, or theyll put out a general plea for someone to clear out a nearby camp of barbarians or brutes. Whoever gets there first will reap the rewards - be it gifted military units, a big wad of cash, or permission to temporarily enter their borders.

But fighting - yes, thats where we were heading - is whats interesting about this thread of the game. Unlike previous Civilization titles, Civ V eschews a standard square grid in favour of a hex-based system. It also prevents you from stacking units in the way you were able to before. Which means certain doors are closed off, and youre forced to think a great deal more tactically. Combat remains entirely turn-based, and theres no real opportunity to influence your army once theyve begun their spike-wielding fisticuffs (which is how I understand wars are fought; military expert, me). But the added number of angles from which you and your foe can attack opens up many more avenues for strategic placement. Its a small change, but a hugely effective one. 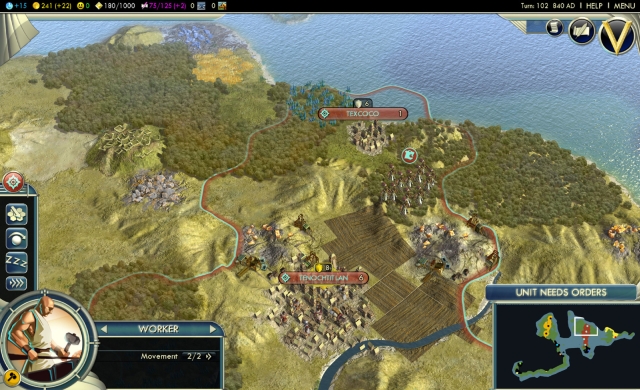 So, thats one way to win the game. But there are a few more. You can become the fastest developing nation on the map, researching new technologies, progressing through the timeline at an alarming rate, and being the first country to build and launch a space ship. This, I found, was perhaps the easiest target to aim for. Instead of purchasing new units, resources or buildings for each of your cities, you have the option of advancing research within them. Build decent trade routes to other areas under your rule, and you can skip things ahead at quite a rate. Of course, this means theres the chance that foes may take advantage if youre lacking in other areas. And if youre not supplying your citizens properly their happiness rating will plummet. But it never posed too much of a problem in my game.

Alternatively, you can become delightfully cultured, and speed on to victory that way. As well as the technology tree, Civilization V features a structured culture system which allows you to develop your nations arts, humanities and belief systems. The specifics of religion itself have in fact been removed from Civ V, but its remnants stick around in the culture process, in which your aim is to max out all of your options for each of your cities and effectively take over the world in doing so.

The fourth (and final, assuming were not counting the rather dull make sure you have the most points when the clock runs out option) way of emerging victorious is to rely on your diplomatic charm. And heres a major place in which Civilization V seems to fall down. Maybe its just too long since I last tackled a Civ game, and Ive simply lost my ability to play make believe within its boundaries. More likely, theres a problem. Because for the life of me, I just could not even fool myself into being convinced by the diplomacy system. 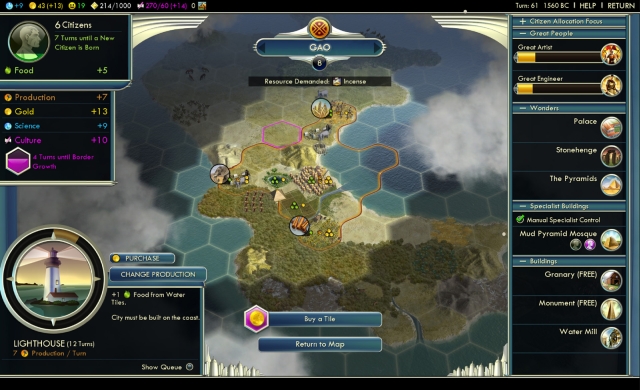 Its just so patently artificial, stripped of anything that might make your counterparts seem believable. Greetings! they proclaim in a delighted voice, before thanking you for all that lovely stuff youve sent their way, then declining your request for - I dunno - alliance against an obviously mental city state with a firm What are you talking about?! or similar. Its enormously difficult to gauge what chance you have with these diplomatic relations, and theres almost no way of meeting in the middle, aside from trying to balance some sort of awkward political trade which never quite seems to work the way it should. Its quite interesting that the only time Civ V gets up close and personal - rendering a sinisterly accurate 3D model of these real-life historical leaders for you to talk to - also sees the game at its least human.

Diplomacy has competition in that respect, though. Yes, fighting may be massively improved in a great many ways, yet the AI is... board gamey. And yes, I know, Civilization has always essentially been a board game gone digital. But theres something oddly soulless about the way the enemy plays, even when its being fairly sensible. When its not, its just blatantly problematic. It makes stupidly aggressive moves where it has no hope of winning, or just goes bonkers and attacks for no discernible reason. But even when its playing more smartly and realistically, theres something distressingly mechanical about the process. It dances around your nation waiting for the right moment to strike, but the impression youre left with is of sitting around playing at being big warlord leaders. What it all amounts to is that there are times when Civilization V feels very much like a simulation of a simulation of trying to take over the world. And at those times, it feels unfortunately cold.

Thats why Ive been task-switching so much. There is no doubting that Civilization V is a deep, complex game, ruthlessly addictive, and polished beyond any prior installment in the series. Its so difficult to stop yourself from playing just another few turns, then just another few more. And the interface, massively polished as it has been, makes doing so easier than ever before. Switch to and from it, and the game just about holds up for long stretches of time. But despite being mildly addicted to it over the past few days, not once have I felt truly gripped, properly taken in, by Civilization V. Elegantly constructed, and absolutely beautiful, its nevertheless lacking a certain something: a certain spark, a speck of real character, and - frankly - just a little bit of soul.
3.5/5

If you enjoyed this Civilization V review, you're encouraged to discuss it with the author and with other members of the site's community. If you don't already have an HonestGamers account, you can sign up for one in a snap. Thank you for reading!

© 1998-2020 HonestGamers
None of the material contained within this site may be reproduced in any conceivable fashion without permission from the author(s) of said material. This site is not sponsored or endorsed by Nintendo, Sega, Sony, Microsoft, or any other such party. Civilization V is a registered trademark of its copyright holder. This site makes no claim to Civilization V, its characters, screenshots, artwork, music, or any intellectual property contained within. Opinions expressed on this site do not necessarily represent the opinion of site staff or sponsors. Staff and freelance reviews are typically written based on time spent with a retail review copy or review key for the game that is provided by its publisher.