The original FEARs centrepiece was its creative combat. The game saw you punching, kicking and sliding your way around tight, enclosed areas, sending increasingly challenging waves of enemies flying to their doom in slow-motion. FEAR might have been something of a one-trick pony, but the sheer kinetic energy of its combat was good enough that, when FEAR 2 sidelined the melee, the result was a hollow experience, even though the shooting was accomplished.

FEAR 3 (because were not for a minute going to write F3AR) takes this one step further by asking you to unlock your melee attacks as you progress through the game. Slow-motion remains but, if you want to use it for more than a couple of seconds at a time, youll have to unlock that ability too. In fact, the majority of FEAR 3s most interesting and enjoyable content isnt available by default. Even half of its multiplayer modes come in the form of a single-use redeem code shoved in the box, meaning anyone who has the audacity to buy pre-owned will have to pay extra for the privilege. 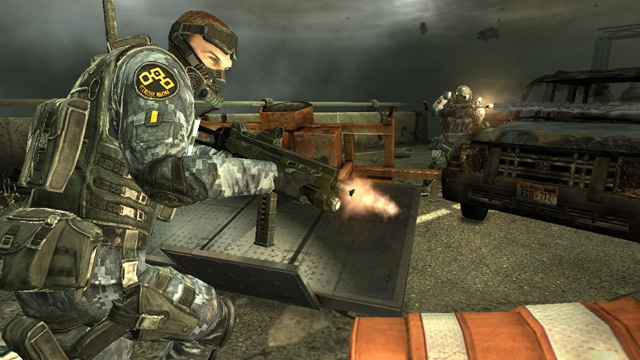 The centrepiece of combat this time around is a new snap-to cover system, allowing you to hide behind a selection of chest-high objects and peek out to take pot-shots at the enemy. Its basically a formalised version of the system youll have found yourself using in the second game: take cover, activate slow-motion, peek out and shoot. Once again, melee is out of the question for the most part: enemies attack in large groups, moving around constantly, attempting to flank you and drop you as quickly as possible. You can try for the flying kicks once youve unlocked them, but chances are youll end up quite dead, quite quickly.

This means combat becomes an often entertaining game of cat-and-mouse. Its bad news if you stay behind the same piece of cover for too long, as FEAR 3s goons are more intelligent than that. Theyll lob in a grenade, or send someone to draw you out from behind. All the while, their defensive strategy is much the same as your own: hide, shoot, move, repeat. When youre down to the last couple of enemies in a larger area, gunfights can end up drawn out for minutes, as you battle frantically for supremacy over the games AI.

This almost makes FEAR 3s single-player sound fun. It isnt. Its an absolutely catastrophic mess of a campaign, tenuously strung together by a story so convoluted that I genuinely cant remember what happens in it. Writer Steve Niles and director John Carpenter were drafted in to polish up the games narrative, which might give you reason to be optimistic, but dont be fooled: this is a game that believes the best way to remain intriguing is to hold back as much necessary information as possible for as long as you can get away with. The result isnt even close to being compelling; its simply confusing and tedious. 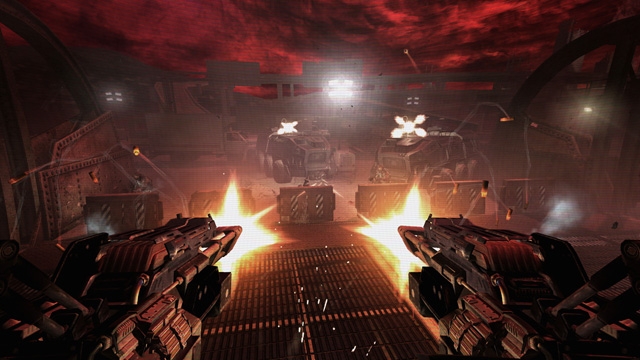 It also thinks throwing in a fair selection of different environments is enough to stop the game from being predictable. And admittedly, when used to the drab greys of the FEAR series, its nice to find yourself blasting through a town during the daylight within a couple of hours of the games opening. But when each encounter plays out identically, things quickly become dull regardless.

As enjoyable as the combat mechanics are, its no fun to clear out yet another room of the same enemies via exactly the same means. Its no fun when you know that the door up ahead is going to suddenly burst open to reveal a pair of bad guys. Even the scares are no fun once you realise that FEAR 3 is never going to dare to push them. There are a few jumps, but none of its attempts at slow, creeping horror actually go anywhere: they fizzle out, each and every time, into just one more weird, unexplained thing that happened in between the shooty bits.

Plus, while the environments are varied and the combat arenas carefully pieced together to complement the action, other intricacies of the level design are poor. There are so many locked doors, for example, the majority being painted-on textures with no other explanation of why you cant venture inside. And signposting is atrocious throughout, meaning that although the game is entirely linear, I managed to spend a great amount of time wandering around in search of that one route down which I was allowed to progress. 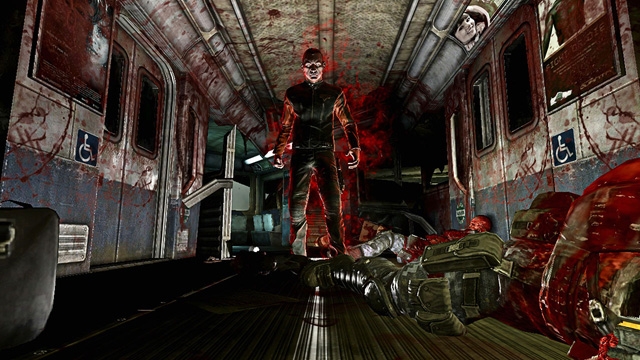 Thankfully you can bring a friend along for the campaign, and this is where things begin to get more interesting. Player 2 takes on the role of Paxton Fettel, the newly ghost-ified super-soldier who returns from the previous FEAR outings. As Fettel, you can possess the bodies of your foes and turn them against their previous allies, assisting Player 1 in their more traditional efforts.

Playing as Fettel breathes new life into the campaign. Theres a wonderful balance to be found between the hard-as-nails attitude you can take when youve possessed an enemy, and the worrying sense of vulnerability you have in your original form. Moreover, co-op introduces a competitive element to the game, rewarding the player whos performed best at the end of each mission. The result is an interesting buddy game where two people are constantly trying to outdo each other, even though theyre forced to work together for the most part.

The other two default multiplayer options are a zombie horde mode (as is customary in a modern, AAA shooter) and an intriguing setup called Soul King, in which each player begins as a floating wraith capable of possessing enemies, before battling it out to kill the most foes and collect the most souls. The former is overdone now, and the latter can be a touch confusing, but both are spiced up by the introduction of Alma - the FEAR series trademark Creepy Little Girl. 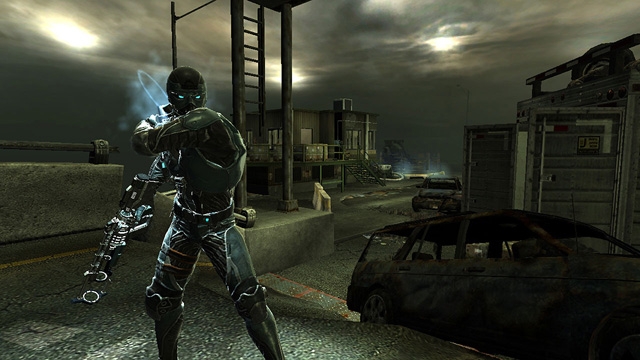 She pops up randomly on the maps, and staring at her for too long causes something bad to happen. In the horde mode, Contractions, she sends you flying to the other side of the level, away from your fellow players and potentially into a lot of danger. In Soul King, she summons a big purple demon who can kill you in seconds. Catching a glimpse of her little red dress can be a surprisingly effective scare, as you quickly dart the other way and hope she didnt catch you looking.

The two downloadable multiplayer modes are Soul Survivor and the delightfully named F**king Run. In Soul Survivor, one player starts as a wraith while the others take on waves of enemies, and its the wraiths job to try to convert everyone else to its own spectral form. Meanwhile, F**king Run is perhaps the most refreshing mode of the bunch: a giant wall of death creeps up behind you, pushing you forward into enemy territory, and its up to your team to outrun the wall while outgunning the enemies. Its heart-pounding stuff, genuinely thrilling, but since its only available as a one-time DLC code I feel slightly uneasy heaping too much praise on FEAR 3 as a result.

Ultimately, some interesting multiplayer modes arent quite enough to make up for a single-player campaign that feels lazy, convoluted and predictable for its entire duration. But they are a decent diversion, and theyre where youll be spending most of your time should you choose to pick this up. Just be bloody sure you dont buy second-hand, or youll be left with an insubstantial multiplayer game and an atrocious single-player one, and emerge extremely disappointed, even if youve enjoyed the series so far.
2.5/5

© 1998-2020 HonestGamers
None of the material contained within this site may be reproduced in any conceivable fashion without permission from the author(s) of said material. This site is not sponsored or endorsed by Nintendo, Sega, Sony, Microsoft, or any other such party. F.3.A.R. is a registered trademark of its copyright holder. This site makes no claim to F.3.A.R., its characters, screenshots, artwork, music, or any intellectual property contained within. Opinions expressed on this site do not necessarily represent the opinion of site staff or sponsors. Staff and freelance reviews are typically written based on time spent with a retail review copy or review key for the game that is provided by its publisher.