I remember when war was glorious. When my warhorse would race across a grassy plain toward a line of knights. That delicious anticipation just as the tip of my lance finally settled over a knight's steeled heart. Then with a crash and a scream he was gone and I was thundering into the midst of enemy infantry, cleaving left and right with my sword. It was the age of knight, the age of Mount & Blade. I was the king of the battlefield.

With Fire and Sword inaugurates an age of cowardice and senseless slaughter. Mobs of musketeers blindly shoot at their betters. Pikemen take cover behind eight-foot spears that slay anyone who comes near. Aside from guns, With Fire and Sword gives players just a little bit less in every way. Less variety, less convenience, and less fun. 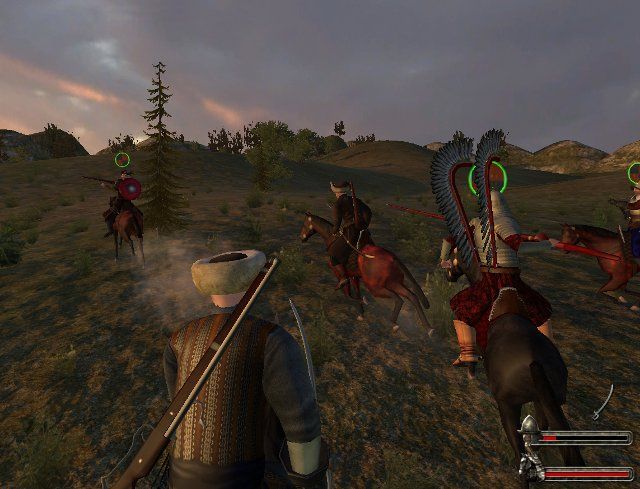 The single-player campaign should be familiar to series veterans. You start out alone in a war-torn land, mid-1600s Eastern Europe in this case, and you can gain wealth and power in a variety of ways. You ship cargo from city to city, fending off bandits and hostile nobles. You can join one of the local powers and if you provide them with good service, you will receive a land grant that serves as a platform for greater conquests.

There are some quests available for your character that provide some semblance of a story. For instance, my Polish nobleman must somehow save Poland and recapture the fallen city of Warsaw. In practice, this does not really affect the way you play the game. I received the Warsaw quest a long time before I could do anything about it, and the AI characters are little help. I rode around collecting fellow noblemen and their armies to attack Warsaw, but even as I recruited new armies to the cause, the old ones wandered off. A few days into my siege of Warsaw, everyone in my army just left.

At times, half the nobles of Poland seemed to be rotting in Swedish and Russian prisons. Sometimes they ride to one another's aid, but you are just as likely to see a dozen AI armies ignore a single ally getting picked off nearby. This is intensely frustrating when you need allies to help you accomplish something, and they've all managed to get themselves captured (and their armies destroyed in the process). Thats typical Mount & Blade, of course, but the struggle to save these idiot kingdoms from themselves gets old. The campaign feels like one long escort mission.

Eventually, you won't be so dependent on your fellow nobles. But unlike earlier games in the series, With Fire and Sword doesn't offer much help for the upstart mercenary trying to form an army. You can recruit unit types from taverns, like mercenary pikemen or musketeers, but they are not particularly great units and they tend to die in droves in combat. The same goes for the custom troops you can acquire from the mercenary encampments scattered around the world. Time and again I recruited squads of infantry and cavalry, equipped them with good armor and weapons, and still they were slaughtered in their first battle. In Mount & Blade, if you took care of your troopers, they would become hardy and far more lethal. With Fire and Sword leaves you in charge of a fragile mob. 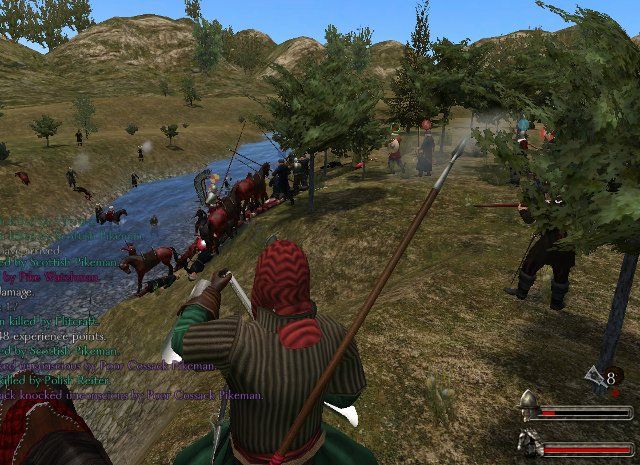 The AI is suspect in combat. While AI parties, particularly hostile ones, tend to move in formations and maintain cohesion until the battle is joined, your troops are big fans of the headlong rush into Death's waiting arms. Cavalry charge pikemen head-on while your own pikemen and halbardiers dissolve into a scattered mob. Ranged units might be the most infuriatingly stupid: the moment they are within range of the enemy, they will stop moving and start shooting and will not respond to any more orders. Seriously. Your ranged units are stuck at maximum range where they can do precious little good, while the fight moves inexorably closer to enemy marksmen, who will devastate your melee units.

This kind of incompetence is old news, although one would have hoped that for the series' third outing the AI squadmates would be better at self-preservation. What makes it more frustrating than in the past, however, is that you simply cannot be enough of a superhero to make up for their ghastly mistakes. Because now there are all these guns, you see.

When everyone was carting swords and lances around, it was easy to control the risks you took. Arrows were dangerous and a bit random, but rarely could they drop you in a single hit, and they were both inaccurate at extreme ranges and hard to fire at close-quarters. Now, however, you can hear and even see musket balls whistling past your head from the moment the battle begins. Short of hiding behind a hill (and don't kid yourself, I've done it plenty of times) there is nothing you can do to avoid taking one of these pests in the head. Most of them won't hit you, particularly at long range, but each of them could. And if you get in close to the musketeers, they can always shoot you dead at point-blank range, something archers have a devil of a time doing. That's if you even get in close; as I already mentioned, you first have to make your way through a forest of spears and halberds.

In guns' defense, shooting people is pretty satisfying. I remember one of my best knights had his horse cut out from under him, and he was standing in the path of an oncoming lancer. I spurred my horse to a dead run, reloading my pistol on the way. I finished priming the shot just as the lancer leaned down for the killing blow, zoomed-in to aim, saw his helmet crossing into my sights, and shot him through the head at twenty yards.

I have played far less of the multiplayer, and have few experiences from the earlier games to which I can compare it. In the games I played, I experienced many of the same frustrations I outlined above, except human players are even more lethal with pistols and spears. My teams also tended to over-rely on firearms. Too many matches devolved into ineffectual skirmishes at medium range. Also, playing infantry classes can be really joyless due to the long walks from the spawn point to wherever the action is. Sword-and-musket squad games are in short supply, but honestly, if I want muliplayer action I'm probably going elsewhere. I prefer having the game be all about me to being a foot soldier in a multiplayer melee.

With Fire and Sword disappoints me on two levels. The first is the way it not only fails to improve on its predecessors, but is actively inferior to them. The frustrating, broken things are still frustrating and broken, and the good things are diminished. The other disappointment is one of vision. Mount & Blade could be such an incredible action RPG, or a medieval Privateer-style game. Instead, it remains an open-world game with cookie-cutter encounters and only the vaguest sense of purpose. When M&B was new, this was enough. It is no longer new.
2.5/5

If you enjoyed this Mount & Blade: With Fire and Sword review, you're encouraged to discuss it with the author and with other members of the site's community. If you don't already have an HonestGamers account, you can sign up for one in a snap. Thank you for reading!

© 1998-2020 HonestGamers
None of the material contained within this site may be reproduced in any conceivable fashion without permission from the author(s) of said material. This site is not sponsored or endorsed by Nintendo, Sega, Sony, Microsoft, or any other such party. Mount & Blade: With Fire and Sword is a registered trademark of its copyright holder. This site makes no claim to Mount & Blade: With Fire and Sword, its characters, screenshots, artwork, music, or any intellectual property contained within. Opinions expressed on this site do not necessarily represent the opinion of site staff or sponsors. Staff and freelance reviews are typically written based on time spent with a retail review copy or review key for the game that is provided by its publisher.