Image Fight on the NES is absolutely horrible. Or at least thats what youre going to believe. This review wont convince you otherwise. Its not that my writing wont move you to think the opposite, but the screenshots will strive to keep you in the dark. The pictures tell the real story, not the words. Please dont like this game.

Two years prior to its inception, the original Image Fight saw release in the arcades. It wowed few gamers, but received the scorn of many. To these jaded players, few titles were more unfairly challenging. About the only worthwhile element was the games detailed art designs. Too bad all of that is laid to the wayside in this technologically inferior port.

Remember, few stories are sadder than this! Charmed with the notion of placing their game on Nintendos excellent, though primitive, NES, Irem downgraded detail, dulled colors, and omitted entire backgrounds to make NES Image Fight a reality. By the time they were through gutting their game, you could hardly recognize what was once there.

The OF-1, which was never a Cadillac to begin with, is now modeled after a hearse. Considering the notorious difficulty associated with Image Fight, one would think the comparison rings true. Ironically it doesnt.

NES Image Fight is easy. Even without the practice.

Whiners will love it. Hardcore masochists will find it boring. Everyone else will look elsewhere to sate their gaming needs. Please dont play this game! If you do, you will probably beat it, dispelling the notion that Image Fight is supposed to be tough as nails. Youll forget about it, and then youll go back to R-Type. After all, thats the only shooter franchise Irem made thats worth playing. 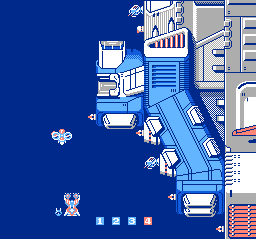 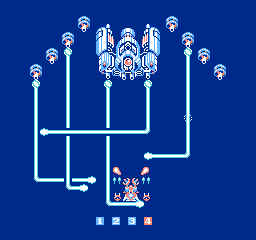 Now that weve established how you should feel, I suppose youre wondering how I feel. I love NES Image Fight in the sense that I love plain and simple concepts. Its not flashy. But if there is one version of this game thats easy to get into, this is it. The colors are dulled, and the backgrounds mysteriously vanish after the first stage. But you know what? Just as silent films seem to add more to the experience by subtracting away voice work, NES Image Fight adds to its aura by offering only a scant amount of color. Youre not straining to see enemy fire, nor are you a victim to your surroundings. Things becomes simple. Shoot and dodge. Theres nothing else to behold.

As for the OF-1, it remains unchanged. Its a dream to control when its armaments are decked to the max, yet its hull remains a deathtrap to the uninitiated. The foes it battles are neutered. These once ferocious alien ships are now relegated to sporadic fire and more compact design. I think they are piloted by pacifist aliens concerned with fuel consumption. All the gas-guzzling hawks were shot down in the arcades.

Thankfully, it would not be the last time that the ferocious enemies from the arcade would make an appearance. Only a few months after hitting store shelves, Image Fight would see one more notable release, this time on the PC Engine. It would be the best rendition yet.

I recommend you play it instead of this.

Part 1: The Tradition
Part 3: The Triumph

If you enjoyed this Image Fight review, you're encouraged to discuss it with the author and with other members of the site's community. If you don't already have an HonestGamers account, you can sign up for one in a snap. Thank you for reading!

© 1998-2021 HonestGamers
None of the material contained within this site may be reproduced in any conceivable fashion without permission from the author(s) of said material. This site is not sponsored or endorsed by Nintendo, Sega, Sony, Microsoft, or any other such party. Image Fight is a registered trademark of its copyright holder. This site makes no claim to Image Fight, its characters, screenshots, artwork, music, or any intellectual property contained within. Opinions expressed on this site do not necessarily represent the opinion of site staff or sponsors. Staff and freelance reviews are typically written based on time spent with a retail review copy or review key for the game that is provided by its publisher.