There once was a time when arcades werent merely a mythical entity mused about by older gamers. Oh, but its true -- arcades were real places, built of brick and mortar and packed with fighters, beat-em-ups and sports games designed to munch away every last scrap of money you could muster. Few reigned supreme in the arcades like SNK, and lucky for those who never experienced those glorious times, there is SNK Arcade Classics Vol. 1, which chronicles 16 of their efforts from this bygone era.

Lets start with the cream of the crop: Metal Slug. This run-n-gun, Contra-style shooter enlists you to defeat the evil General Mordens army in a journey filled with non-stop shooting, satisfying weapons, and brilliant boss battles. The challenge level is relentless, just as it should be, and the sheer variety in the levels prevents the game from ever growing old. This is unquestionably one of the best games ever to come out of SNKs doors, so it easily earns its spot in the compilation. If your bloodlust isnt fully sated by the time the credits roll, though, theres always Shock Troopers, which is an overhead shooter akin to Capcoms Commando series. It, like Metal Slug, tasks you with shooting up a whole lot of soldiers; and its no less chaotic. This is another of SNKs finest, and its constant violence should appeal to any red-blooded male. Played by your lonesome, these actioners are great fun and warrant multiple playthroughs; but if youve got a friend to blast baddies along with you, theyre as good as arcade games get.

When it comes to sports games, Classics is still a champ. The prime offering is Baseball Stars 2, which is easily one of the most enjoyable baseball games ever produced. It cuts through all the needless complexity of modern baseball games, opting instead for an incredibly fast-paced nine innings that kick realism to the curb. The arcade-y mechanics make for a surprisingly addictive game of baseball that, though streamlined, doesnt feel too simplistic. Next up is SNKs mid-90s golf game, Neo Turf Masters, which is just as fun today as it was all those years ago. There have been innumerable golf sims released since Turf Masters, but few games make the sport as accessible, speeedy, and straight-up fun as it is here. Even if you hate sports games with a passion, these two titles will almost certainly have you glued to the screen  theyre that good. 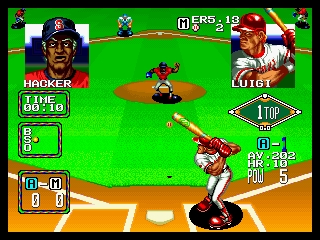 
Sadly, not every entry here is a standout, and some are just plain bad. King of the Monsters, Fatal Fury and Sengoku; for example, have always been terrible games that dont belong on any compilation of classics. The inclusion of yet another copy of the insipid Art of Fighting is, quite plainly, a slap in the face. Youd be well-advised to skip these games altogether. The bigger problem, though, is that the vast majority of the lineup is decidedly ho-hum. Last Resort is a decent horizontal shmup thats worth playing through once, but its a very basic R-Type clone without much originality. Samurai Shodown and The King of Fighters 94 are competent fighting games, but it wasnt until later installments that these series really began to shine. The side-scrolling platformer, Magician Lord, is good for a few minutes of mild amusement, but is also starting to show its age. While it makes sense that SNK wanted to draw from their older titles for this first SNK Arcade Classics volume, the end result is a compilation burdened by games that dont showcase why players loved SNK so much in the days of the arcade. While theres definitely some good content here, Vol. 1 feels like a missed opportunity when you consider that real classics like Last Blade or the Real Bout series are painfully absent.

On the bright side, the compilation is technically sound for the most part. The emulation of the games is generally spot-on, though there are a few niggling issues like the omission of hitflashes when fighting some Metal Slug bosses and a some minor missing sounds in Samurai Shodown. Theres no good reason why the emulation of these games shouldnt be perfect given the Wiis capable hardware, but this is more than made up for by the removal of the slowdown that plagued some of these games in their initial Neo Geo releases. In addition, the performance problems in the PS2 and PSP releases of the collection have been quashed, making the Wii version the one to own. Those concerned about censorship (which nobody can be faulted for given SNKs tumultuous past) can rest easy, because the blood here is both red and plentiful. Most importantly, though, the games themselves are still easy on the eyes and sound great despite being more than a decade old, which is a true testament to the power of the Neo Geo.


This considerable stack of games is managed through a slick, easy-to-use interface, and it never takes more than five seconds to jump into one of the titles. One of the compilations more interesting features is the medal system, where you are rewarded for accomplishing a specified goal in a game with a piece of artwork or music. Its nothing major, but it does provide some incentive to dig deeper into the lineup. There are a few bizarre design choices like the lack of control over a games difficulty parameters (you can only choose general settings like easy or normal) and including move lists as an unlockable bonus despite that such information is vital for the fighters, but overall, this is a functional, well-designed disc. Take note, however, that while all of the games support the Wii-mote and nunchuck, you won't want to play them like this; the classic controller is practically a requirement for an enjoyable experience.

While it would be nice to see a more consistent batch of titles in the next installment, SNK Arcade Classics Vol. 1 is still well worth picking up for any retro gaming fan. The disc's highlights are some of the best games ever to grace arcades and considering the modest price, especially compared to the cost of buying SNKs games on Virtual Console or the staggering price of the original Neo Geo carts, its a tough bargain to pass up.
3.5/5

If you enjoyed this SNK Arcade Classics: Vol. 1 review, you're encouraged to discuss it with the author and with other members of the site's community. If you don't already have an HonestGamers account, you can sign up for one in a snap. Thank you for reading!

© 1998-2020 HonestGamers
None of the material contained within this site may be reproduced in any conceivable fashion without permission from the author(s) of said material. This site is not sponsored or endorsed by Nintendo, Sega, Sony, Microsoft, or any other such party. SNK Arcade Classics: Vol. 1 is a registered trademark of its copyright holder. This site makes no claim to SNK Arcade Classics: Vol. 1, its characters, screenshots, artwork, music, or any intellectual property contained within. Opinions expressed on this site do not necessarily represent the opinion of site staff or sponsors. Staff and freelance reviews are typically written based on time spent with a retail review copy or review key for the game that is provided by its publisher.