When you pick up an RPG with the Gust logo on it, you can be pretty sure about what you're getting. After all, Gust is a company that plays to their strengths and gives their fans exactly what they want. Unfortunately, this practice had lead to a slew of RPGs that felt all too similar to one another. Mana Khemia: Alchemists of Al-Revis is Gust's attempt at a fresh RPG, and while not all of its new ideas are home-runs, its still an engaging and worthwhile adventure for fans.

Khemia begins in a sleepy forest where the game's amnesiac protagonist, Vayne Aurelius, resides alongside his magical cat (referred to as a "Mana"), Sulpher. Vayne is paid a visit by a professor from the Al-Revis Academy -- a school that specializes in alchemy. Eyeing Vayne's vast potential, the professor convinces him to join up with the school and begin his journey towards becoming a great alchemist.

Its a premise with some potential, but the developers simply didn't run with it. The school setting is fairly unique, but the various plots and sub-plots are all fairly standard RPG fare, and there aren't any particularly interesting twists or memorable moments to speak of. The characters, while cute and plucky, lack creativity. Your party runs the gamut from the clueless, ditzy girl to the strong, silent brute. Every major character is an RPG stereotype of some sort, and while the cast isn't exactly boring, it is disappointingly derivative. 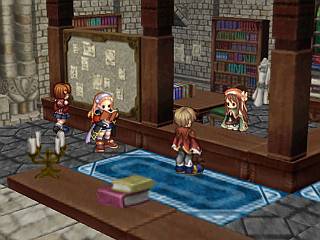 
Most of the game's originality comes in the form of the school campus setting. Since you're a student at Al-Revis, the gameplay is designed around going to classes, doing homework assignments, and exploring the campus during your free time. You'll learn skills as you pass your classes, receive a letter grade indicating how well you did, and earn the grade units necessary for passing a term. Passing your classes requires you to complete homework assignments which typically ask you to find a certain item, create an item through synthesis, or kill a specific enemy in a dungeon. If you fail a class, you'll have to retake it, but the assignments you receive will be more difficult than before. When you've got a spare moment, you can opt to take on a number of side-quests, and it's certainly a good idea, because the quests you complete will have an impact on which ending you receive. It's difficult to accuse Gust of not utilizing the scholastic setting effectively, but just as in real school, Al-Revis academics aren't always fun due to the mundane chores outlined in your homework. Going into a dungeon to collect random items, for example, is utterly uninteresting and chances are that you'll find yourself less than thrilled at the prospect of receiving a new homework assignment. That's not to say that the whole game consists of these bland tasks, but the campus setting brings some decidedly dull moments with it.

Its nice to be safe and sound on your schools campus, but this is an RPG, so youre going to be spending most of your time exploring the games copious dungeons to complete your assignments. Dungeons typically have very basic, maze-like constructions, but theres ample room for exploration which keeps the adventure from becoming overly linear. Unfortunately, most areas are composed of very similar-looking tiles and patterns which can make some of the longer dungeons feel painfully repetitive. There are a few nice touches like day and night cycles which change the enemies youll fight in battle and how difficult your opponents will be, but as a whole, once youve left the campus, the games creativity begins to fizzle.

This wouldnt be an RPG if the dungeons werent littered with enemies. Khemia eschews random encounters and lets you see where enemies are so that you can decide whether or not you want to fight. If you manage to strike an enemy on the map with your sword, youll get the jump on them and attack first. When you enter battle, your party is divided up into a front row and back row. The front row consists of the characters you want to rely on for dealing the major damage, while the back row can periodically be called upon to perform various offensive and defensive techniques. Its a smarter take on battle formations that gives an otherwise ordinary combat system a shot in the arm. Combat is surprisingly challenging, and offers just the right amount of resistance for RPG veterans while not becoming unreasonable for newbies.

Those who detest level grinding will be pleased to know that there are no levels to be gained in Mana Khemia at least, not in the classical sense. The game presents you with what is known as the Grow Book, which allows you to spend the AP you earn in battle on stat upgrades for your characters. You cant simply buy whatever your heart desires, though  you have to earn the right by creating equipment. When you construct a new piece of equipment through synthesis, a new set of abilities will open up in the Grow Book, and youll be able to acquire any skills linked with the item you created. This method of character development does do a good job of making stat boosts available at a reasonable pace, but for those who arent fans of item synthesis or who just want to progress from point A to point B as quickly as possible, it becomes tedious. If youre an item creation fiend, on the other hand, chances are that youll love this new take on powering your characters up.

If the Grow Book doesnt make it clear, item synthesis plays a huge role in this game. Everything from your equipment to food can be synthesized on campus, and by having a party member help in the process, you can imbue the final product with different stats and elemental properties. Theres an unbelievable amount of depth to the item creation system, and a dedicated player could plausibly while away hours upon hours on synthesis alone. 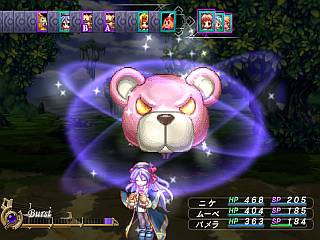 Yup. You can attack enemies with a giant teddy bear.


If 2D graphics are your thing, Khemia is a feast for the eyes. The game is composed of highly detailed, colorful sprites on 3D backgrounds. The character designs are wonderful, and the entire world is whimsical and breathtaking. The graphics when in combat are even more impressive, as not only are the most basic of attacks fluidly animated, but both enemies and allies have some incredibly creative and completely over-the-top (giant, angry teddy bear, anyone?) special moves. This spectacle comes at a price, though, as there are a few significant bouts of slowdown in some of the dungeons. Fortunately, its nothing crippling, and the game is otherwise so beautiful that you probably wont mind.

As has become standard for Gusts RPGs, the soundtrack here is excellent. Theres a wide range of genres to be found, and the compositions fit the games scenes seamlessly. The English voice acting is appallingly bad, but thankfully, the original Japanese voices are included, as well.

Mana Khemia is one of Gusts strongest titles to date. It takes the elements that fans loved in older Gust games, and runs with them. The considerable alterations to the formula make the game feel fresh, though the changes likely wont be enough to make Khemia appeal to many outside of Gusts fanbase. Even so, if youre a fan of in-depth, anime-style RPGs, consider spending a few semesters in the Al-Revis Academy.

If you enjoyed this Mana Khemia: Alchemists of Al-Revis review, you're encouraged to discuss it with the author and with other members of the site's community. If you don't already have an HonestGamers account, you can sign up for one in a snap. Thank you for reading!

© 1998-2021 HonestGamers
None of the material contained within this site may be reproduced in any conceivable fashion without permission from the author(s) of said material. This site is not sponsored or endorsed by Nintendo, Sega, Sony, Microsoft, or any other such party. Mana Khemia: Alchemists of Al-Revis is a registered trademark of its copyright holder. This site makes no claim to Mana Khemia: Alchemists of Al-Revis, its characters, screenshots, artwork, music, or any intellectual property contained within. Opinions expressed on this site do not necessarily represent the opinion of site staff or sponsors. Staff and freelance reviews are typically written based on time spent with a retail review copy or review key for the game that is provided by its publisher.