When Final Fantasy creator, Hironobu Sakaguchi, founded his own studio, people expected great things. Unfortunately, that's not what they got when the team released their mediocre first effort, Blue Dragon. Has the man lost his touch? That doesn't seem to be the case, because his new baby, Lost Odyssey, is one of the finest RPGs in years.

Lost Odyssey follows Kaim Argonar, an immortal who's lived for 1,000 years. Immortality isn't all it's cracked up to be, though, as not only has Kaim lived through the deaths of countless friends and loved ones, but most of his memory has gone missing as well. His goal is to recover these fragments of his past and uncover the secrets behind why his memories disappeared in the first place. That's right -- this isn't a game about saving the world. Your hometown didn't burn down, the world isn't about to end, and pretty much every other RPG cliche sits this one out, as well. What's left is an original, dead-serious story that deals with far heavier issues than most, and there are plenty of evil plots and political machinations to go 'round. Kaim will eventually be aided by a crew of both immortals and normal humans, and they aren't the standard RPG archetypes, either. Everyone has real personality and most of the characters are well-developed over the course of the game. This is a truly refreshing tale, and thanks to some genuinely good writing, you'll stay interested through the game's conclusion.

The more controversial aspect of Lost Odyssey's narrative is the "Thousand Years of Dreams." During your adventure, Kaim will happen upon a character or object that reminds him of an event from his past, and memories will come flooding into his consciousness. The game then allows you to read a lengthy passage that recounts this event. There are no voice-overs or flashy movies -- you simply read the screen while pleasant music plays in the background. Dreams add a remarkable amount of depth to Kaim's character, but since they're low on pizzazz, they run the risk of being too dull for some. These vignettes are remarkably well-written and always amusing, but for everyone who savors these moments, there will be just as many who revile reading a story off of their TV. 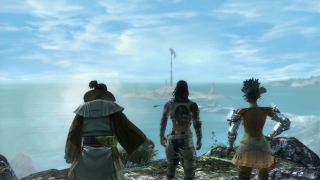 There are times when you, too, will simply want to take in the sights


Kaim's journey might be accompanied by a story that's wildly different from the crowd, but its gameplay isn't far removed from that of other JRPGs. Battles are randomly encountered, turn-based affairs, but more strategic than you might expect. Both you and your enemies have front row and back row formations where characters in the front shield the rear characters from damage. This shield breaks down as front-row characters lose HP, so you'll need to take advantage of this when on the attack and be careful when your own team is under fire. Enemies also have elemental weaknesses, and abusing them allows you increase the amount of damage you do on each turn. You won't be able to simply spam your attack without a thought to defense, though, because enemies hit hard, and hit often. If you aren't judicious, don't be surprised to see the "Game Over" screen more than a few times. Power-leveling isn't a viable option in Lost Odyssey because enemies dole out far fewer experience points after you hit a certain level, so the secret to winning some of the more difficult fights is strategy, plain and simple. Forgoing level grinding in favor of tactics keeps the game engaging rather than turning it into a chore whenever you can't quite finish off a boss, so it's a much appreciated change to an otherwise standard formula.

You'll be doing a lot of micro-managing if you want to keep your party in tip-top shape. At the most basic level, there are three types of equipment to keep track of: weapons, rings, and accessories. Weapons are self-explanatory, but rings are more interesting, as they imbue you with enhancements in battle like a higher chance of getting critical hits. With a ring equipped, a circle will appear on-screen whenever you attack. By holding down the right trigger, a second, larger circle will appear and start shrinking, and your goal is to let go once the circles overlap. The more accurate you are, the greater the effect on your attack. It makes combat a little bit more engaging, and you'll be able to create new rings with better abilities using the items you procure on your quest.

Learning new abilities and magic is invaluable for your party's survival, and the quickest way to do so is through accessories. Simply equip an accessory with the skill you want, and you're set. Mortal characters are also able to learn new (and far better) skills by leveling up, but immortals don't have it so easy. Your undying companions gain abilities through the skill link system where you assign your character a mortal ability that you want to learn. By gathering enough SP in battle, your immortal character will be able to wield this new power. This provides incentive to keep a balance between the characters so that the party isn't dominated by a select few. There's quite a bit going on in the background of Lost Odyssey's battle system, but the game strikes a balance between being too simplistic and overly complicated, so character development is rewarding, but not tedious.

Outside of battle, Lost Odyssey is fairly linear. Towns and dungeons are straightforward and there's no expansive overworld to pore over. As a result, there isn't much to do outside of a few side-quests and optional areas. Fortunately, the main quest is massive and because the story is tightly-woven into all of the many vistas you'll visit, each stop on your journey feels meaningful and relevant. It doesn't hurt that LO's bleak setting is also home to some of the most interesting environments in an RPG -- even the standard forest or cave settings have a dystopian vibe that makes them all the more compelling. That's a good thing, because you'll be spending over 35 hours in Kaim's world on your first play-through, even without attempting any side-quests. 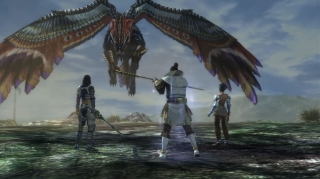 If you're careless, this boss will kill you. Every single time.


Lost Odyssey is a graphical powerhouse. Running on the Unreal engine, the visuals showcase an incredible amount of detail and feature all the fancy effects you'd expect. It also helps that the art direction is quite distinct from that of other RPGs, which makes the game as fun to gawk at as it is to play. The graphics are prone to slowdown and some occasional stuttering, but this does little to hamper the overall experience. The game's soundtrack comes courtesy of the Final Fantasy series' legendary composer, Nobuo Uematsu, and proves to be one of his strongest works to date. Everything from tranquil respites to epic battles is paired with a rousing composition. The English voice acting is decent, but the original Japanese voices are also included along with three other language tracks, so whatever your linguistic needs, there's something for you here.

There simply hasn't been a JRPG as good as Lost Odyssey in a long, long time. This is a game that may be steeped in tradition, but it's polished and unique enough to stand tall among the RPG greats. It won't win over anyone who detests JRPGs, but for those still keeping the faith, there's little out there that can possibly compare to Lost Odyssey's exemplary showing.

If you enjoyed this Lost Odyssey review, you're encouraged to discuss it with the author and with other members of the site's community. If you don't already have an HonestGamers account, you can sign up for one in a snap. Thank you for reading!

© 1998-2021 HonestGamers
None of the material contained within this site may be reproduced in any conceivable fashion without permission from the author(s) of said material. This site is not sponsored or endorsed by Nintendo, Sega, Sony, Microsoft, or any other such party. Lost Odyssey is a registered trademark of its copyright holder. This site makes no claim to Lost Odyssey, its characters, screenshots, artwork, music, or any intellectual property contained within. Opinions expressed on this site do not necessarily represent the opinion of site staff or sponsors. Staff and freelance reviews are typically written based on time spent with a retail review copy or review key for the game that is provided by its publisher.