Devil May Cry sequels have been nothing if not inconsistent. As brilliant as the original game was, the second DMC was universally reviled, and the third game was deemed too tricky by all but the most hardcore. Devil May Cry 4, however, finally strikes gold and proves to be an ultra-stylish action game that will thrill newcomers and hardcore fans alike.

DMC4 stars Nero, a new protagonist with looks nearly identical to those of series veteran, Dante. The game begins with a bang as Dante pays a visit to the religious group, The Order of the Sword, and puts a bullet in their leaders head. Being a member of the group, Nero is none too pleased with this turn of events, and sets off in pursuit of Dante. The story is far from profound, but it is surprisingly strong for an action game. Events unfold through a series of spectacularly over-the-top cut-scenes, which showcase the series' trademark action and humor. In fact, it would be worth playing through DMC for the cut-scenes alone, as they are some of the most thoroughly enjoyable moments of footage ever to make it into a game. He might be a rookie, but Nero is ridiculously cool


The series has always been known for super-stylish action, and DMC4 offers up the strongest showing yet. Nero uses the standard sword and gun combo that Dante did, and it's still quite capable of devastating the demons you'll face off against. Change is a good thing, though, and that's where Nero's arm, the Devil Bringer, comes in. In addition to slashing and shooting, you can now grapple your enemy and toss them into the ground, or pull them over to where you're standing (or even up in the air) and start comboing up on them. It's a vital part of Nero's repetoire and doesn't feel tacked-on the least. There are countless more subtle additions, like the ability to rev up your sword to strengthen your attack and a new emphasis on aerial combat, which add up to some very deep, satisfying battles.

Nero might be the star, but Dante's not getting left out in the cold. Later into the game, you'll finally take control of the son of Sparda. Dante loses Nero's Devil Bringer abilities, but gains a heaping of different weapons, many of which are among the coolest and most unique of any action game. Dante also retains his "styles" from DMC3 like Trickster and Swordmaster, which imbue him with specific abilities. Unlike in DMC3, however, Dante can now switch between styles and weapons on the fly, which opens up an insane number of combative possibilities. Switching over from Nero to Dante is a bit jarring at first, but once you make the adjustment, you'll find that both characters are spectacularly fun to play as. If you still feel like there's not quite enough to the fighting, though, you can also upgrade skills and purchase new abilities for both characters by spending the red orbs you find on your quest. DMC4 has all of the depth of a great fighting game within an action-adventure context, and there simply isn't another action game that feels this refined.

Perhaps the most memorable thing about Devil May Cry 3 was its vertical learning curve that made the game inaccessible for most players. Thankfully, Capcom has found the perfect balance for this fourth installment. When you first start out, you'll have the option of an easy mode, or the normal difficulty setting, and there are several more stringent modes to select from after you finish the game. On the normal setting, DMC4 isn't anywhere near as difficult as the previous game, but it's still challenging enough to entertain long-time fans of the series. On the easy setting, enemies still put up some resistance, but the battles are quite forgiving. The game offers just the right amount of challenge on both settings, yet deftly avoids becoming frustrating, making this a game that's enjoyable regardless of how skilled you are. 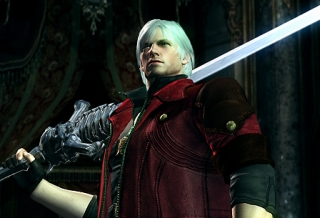 Even so, nobody can come close to Dante


Outside of fighting, DMC4 hails from the old-school of game design. The levels are fairly interesting in their layouts and even have a few light platforming elements, but most of the game consists of you finding "keys" to unlock the next area and being trapped in rooms where you are forced to fight. Sometimes you want to make progress rather than fight every few seconds, so this sort of design can become tiresome after a while. Levels typically end with a boss battle, and each and every one of these monstrosities is incredibly fun to duke it out with. The only problem is that you'll be facing almost all of these foes multiple times, and it does get repetitive. Worst of all, Dante's portion of the game consists mostly of backtracking through previously explored territory, which is an annoyance even though he'll be facing different challenges than Nero did. These design issues are probably going to bother progressive gamers who demand that there be no archaic design in their games, but most will likely be too enthralled in the battles to care.

From a technical standpoint, Devil May Cry 4 is stunning. The graphics are some of the most detailed in an action game, and your abode in DMC's gothic world will run at a liquid-smooth 60FPS. The audio is similarly excellent, and everything from the spot-on sound of gunfire to the beautiful opening melody is aural perfection. Fans of DMC3's disturbingly angry rock music will be happy to know that this entry's battle themes retain the same level of energy. The Playstation 3 version even supports uncompressed audio, so if you have a fancy sound system with such capabilities, you're in for a treat. The PS3 version also requires that you perform a one-time install of the game on your system's hard drive (which takes around 20 minutes), but doing so reduces in-game load times significantly, which makes for a much more seamless experience.

Devil May Cry 4 isn't a particularly long game, but there's plenty of incentive to replay it between the unlockable modes and difficulties. And really, it's worth playing through the game a second time simply because the carnage is so fun. DMC4 might have a few design issues, but the strength of the combat system coupled with all the style you've come to expect from the series makes this easy to recommend to anyone remotely interested in action games.

If you enjoyed this Devil May Cry 4 review, you're encouraged to discuss it with the author and with other members of the site's community. If you don't already have an HonestGamers account, you can sign up for one in a snap. Thank you for reading!

© 1998-2021 HonestGamers
None of the material contained within this site may be reproduced in any conceivable fashion without permission from the author(s) of said material. This site is not sponsored or endorsed by Nintendo, Sega, Sony, Microsoft, or any other such party. Devil May Cry 4 is a registered trademark of its copyright holder. This site makes no claim to Devil May Cry 4, its characters, screenshots, artwork, music, or any intellectual property contained within. Opinions expressed on this site do not necessarily represent the opinion of site staff or sponsors. Staff and freelance reviews are typically written based on time spent with a retail review copy or review key for the game that is provided by its publisher.