Nobunaga Oda is one bad dude -- at least, if games are to be believed. The notorious Japanese leader has been almost invariably portrayed as pure evil in games, with some going as far as making him a demon. Its quite unfair, but Nobunagas Ambition: Rise to Power finally tells his side of the story.

As the title implies, Rise to Power focuses on Nobunagas gradual accent to the most powerful figure in Japan. There are seven different scenarios to take on, each of which looks at a different period in 16th-century Japan. You dont necessarily play as Nobunaga, though  you can choose between one of the countless leaders throughout Japan and progress through the story from their perspective. The storytelling is a bit dry, as it consists almost exclusively of still pictures accompanied by lots of text, but Japanese history buffs will definitely enjoy it.

This is a strategy game for people who love strategy games. The amount of depth and complexity here is pretty much unparalleled, and the sheer quantity of menus, statistics, and text will doubtlessly scare off a lot of players. Most of the complexity comes from the turn-based portions of the game where you oversee your fiefdom. During this time, you have a set number of turns to change and hopefully improve your territory during the current season. This can be achieved the typical strategy game way by building structures like markets or farms, but youll also need to tax your people, use diplomacy to work with the leaders of surrounding areas, take care of your army and officers, and make use of an unbelievable number of other tools. Whats more, youll need to keep track of the myriad numbers that go along with these factors. 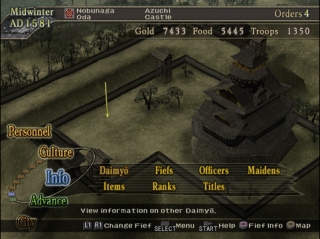 Think being a leader is easy? Just you wait.


Its a lot to remember, to be sure. On the bright side, building your fiefdom piece-by-piece can be a rewarding experience, too. Its satisfying when you finally start to see your alliances growing stronger, your officers becoming more proficient, and your territory becoming ever more powerful. So few games offer you this much depth and so many variables to consider, but it makes the gameplay that much more engaging when you get the hang of it.

Nobunaga didnt make it to the top by being nice. When relations fail and a leader just has to seize someones territory by force, its time to go to battle. These portions of the game are real-time rather than turn-based, and dont play much differently from other RTS games. You select which officers you want to bring to war based on their stats and abilities, and go directly into the fray. Battles are very basic  either defeat the enemy commander, or occupy the enemys fortress to win. Before you can get that far, though, youll have to kill off hoards of soldiers and occupy smaller forts in order to dampen the enemy troops morale. Unfortunately, fights feel a little bit too slow-paced, and they arent terribly exciting. For a game with so much emphasis on complexity, there isnt much thinking that goes into winning battles and the outcome is based more on how strong your army is rather than how effectively you fought.

Lucky for wannabe rulers, Nobunagas Ambition includes a very thorough tutorial. This teaches you all of the basics youll need to get started, and then some. It's a good thing, too, because newcomers would likely find themselves lost without it. Granted, youll still need to devote over an hour to learning the games intricacies, but its an invaluable resource and the copious in-game help makes the game a little easier to leap into, as well.

Nobunagas Ambition tells a tale of ancient times, but sadly, its graphics are from ancient times as well. The visuals consist exclusively of flat, undetailed, and completely bland backgrounds and objects. This wouldnt be impressive even in a first-generation PS2 game. The animation doesnt help matters, either, as what little there is proves insufficient. There are times where youll be unsure if an army is actually attacking a base because the animation is so shoddy. Unfortunately, the visuals really detract from the game overall because they prevent even the wars from ever being exciting to watch. The sound is a different story, however. The orchestrated soundtrack is beautiful and you might just find yourself idly sitting at menu screens to listen to a song. As remarkable as the music is, though, the graphics still drag Nobunagas presentation down. 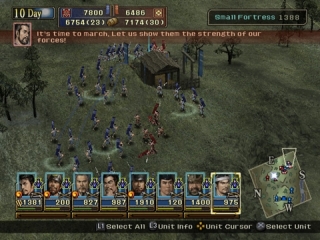 War is ugly, but did they have to make it so obvious?


If its not apparent, this is a game that demands real dedication to appreciate; but is it worth it? That depends entirely on how you view strategy games. If youre a statistics fiend and relish the thought of micromanaging your way to glory, youll probably enjoy Rise to Power. On the other hand, if youre only a casual fan of strategy games or want something fast-paced, this likely wont do it for you. Nobunaga certainly wont appeal to everyone, but for fans of Japanese history and highly methodical gameplay, it might be worth a look.
3/5

If you enjoyed this Nobunaga's Ambition: Rise to Power review, you're encouraged to discuss it with the author and with other members of the site's community. If you don't already have an HonestGamers account, you can sign up for one in a snap. Thank you for reading!

© 1998-2020 HonestGamers
None of the material contained within this site may be reproduced in any conceivable fashion without permission from the author(s) of said material. This site is not sponsored or endorsed by Nintendo, Sega, Sony, Microsoft, or any other such party. Nobunaga's Ambition: Rise to Power is a registered trademark of its copyright holder. This site makes no claim to Nobunaga's Ambition: Rise to Power, its characters, screenshots, artwork, music, or any intellectual property contained within. Opinions expressed on this site do not necessarily represent the opinion of site staff or sponsors. Staff and freelance reviews are typically written based on time spent with a retail review copy or review key for the game that is provided by its publisher.