If you make use of hallucinogens while you play games, Rez HD will probably be the best game you ever play. Since its initial release on the Dreamcast in 2001, Rez has garnered a cult following for its combo of electronic music and trippy visuals, and with good reason. Even today, there's nothing quite like this, so junkie or not, it's worth your attention.

This is one of the only games where the graphics and sound are as important, if not more important, than the gameplay. The A/V presentation defines Rez. The visuals consist of wireframes and simple polygonal figures on sparsely detailed backgrounds. Normally, this would be hideous. Thankfully, everything in Rez is constantly moving and pulsating -- from the lines that compose the ground to your character, nothing ever stands still. When you start shooting at your enemies, even the lasers are stylized in their look and movement. The end result is a sea of color and light. It's completely bizarre, it's unconventional, and it couldn't have been more brilliant. As the "HD" portion of the title implies, the Xbox 360 version has gotten a makeover to support widescreen and higher resolutions, so needless to say, Rez has never looked so good. 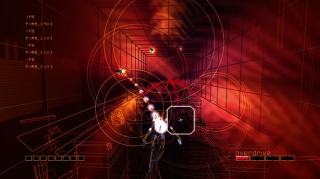 This game is a bit... different.


Rez is designed around music, so it's a good thing that it doesn't disappoint. Each stage has a techno track playing in the background. It starts out as a very basic song, but it adds layers as you progress further through the level, almost like a club DJ cranking out the beats. The tunes are universally excellent, so fans of this type of music should enjoy the game for that reason alone. Rez HD incorporates a 5.1 sound option for those with capable setups, and it is simply incredible. The addition of surround sound makes this a far more thrilling game than it has ever been, and this easily justifies an upgrade from prior versions.

The gameplay is essentially a musical version of Panzer Dragoon. Rez is an on-rail shooter where you create music in the process of destroying your enemies. Its simple: you hold down the A button, drag your cursor over enemies, and let go. You'll fire a beam that emits a sound to the background music's beat. When the shot hits the enemies, another sound plays to compliment the music. Youre constantly firing away, and thus, creating the complexity in the music. It's an oddly satisfying sensation that meshes perfectly with the techno, and you really feel like you're taking an active role in the music rather than just listening to it. It doesn't get old, either, since each stage has you working on a new song with a distinct feel to it. As cliché as it might sound, Rez's fusion of A/V presentation and gameplay really makes it an experience, and it's worth playing through for that reason alone.

The first four stages share the premise of your character hacking into a computer system, and are fairly similar in their layouts. You take out a few enemies, and eventually, a ball of light will appear which moves you to the next of the stage's ten segments. Like the music, the levels themselves will become more complex as you progress and since the enemies become more plentiful, your shooting will create the perfect amount of aural chaos to compliment the soundtrack. At the end of these stages, there is - you guessed it - a boss battle. These, too, are quite creative, though they occasionally become so frantic that you won't be sure exactly what you're shooting at. The fifth level chronicles the beginning of the world. No, it doesn't make sense to me, either. That's alright, though, because this stage is far longer than the others, even more entertaining, and is set to the best music in the game. Its strange and completely absurd, but its also one of the most memorable levels of any shooter to date. 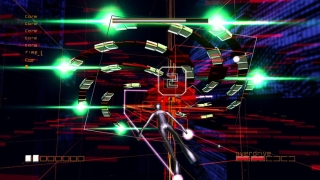 Nobody will ever be able to decipher this.


As a shooter, Rez is pretty basic since apart from highlighting enemies and shooting, the only other weapon at your disposal is an overdrive attack that destroys everything on the screen. Your character can level up into new, stronger forms by collecting certain items, but it's somewhat pointless since this isnt a difficult game. Enemies rarely fire at you, and when they do, it's easy to destroy whatever projectiles they send your way. Even so, this isn't a game about the challenge - it's about the experience. Shooting through droves of enemies in the name of music composition is a mechanic that's enthralling regardless of difficulty.

Rez HD's significant drawback is its length. The game's five stages will take well under two hours to complete the first time through. There are a few bonus modes to tackle (Beyond mode from the PS2 version is included) as well, but overall, there isn't a whole lot to keep you going. Still, at a price of 800 points on XBLA (about $10 in real currency), it's not too difficult to justify purchasing, especially for a game that offers this much pure enjoyment.

This is a truly different breed of game and it's unmatched in terms of style. If you've still got the PS2 version, it's definitely worth the upgrade to HD for the superior video and audio. If you haven't played any version of Rez, what are you waiting for? This is a fantastic shooter, and one well worth owning.

If you enjoyed this Rez HD review, you're encouraged to discuss it with the author and with other members of the site's community. If you don't already have an HonestGamers account, you can sign up for one in a snap. Thank you for reading!

© 1998-2021 HonestGamers
None of the material contained within this site may be reproduced in any conceivable fashion without permission from the author(s) of said material. This site is not sponsored or endorsed by Nintendo, Sega, Sony, Microsoft, or any other such party. Rez HD is a registered trademark of its copyright holder. This site makes no claim to Rez HD, its characters, screenshots, artwork, music, or any intellectual property contained within. Opinions expressed on this site do not necessarily represent the opinion of site staff or sponsors. Staff and freelance reviews are typically written based on time spent with a retail review copy or review key for the game that is provided by its publisher.