Turning Mario & Co. into paper cut-outs was a surprisingly good on Nintendos part. After all, it led to the creation of the excellent Paper Mario RPGs on the Nintendo 64 and Gamecube. Super Paper Mario is the third installment in the series, but it alters the formula to the point where it's almost unrecognizable. While this prevents the series from becoming stale, the changes weren't necessarily for the better. While some of the additions to Super Paper Mario are clever and unique, the game simply isn't as good as it could have been.

Super Paper Mario begins with Mario and Luigi sitting in their house on a sleepy day. To brighten things up, they decide to pay a visit to Princess Peach, but the moment they set out, Toad darts over and alerts the brothers that Peach has been kidnapped yet again. Of course, Mario and Luigi run to face the obvious culprit, Bowser. Upon confronting him, however, it turns out that the true mastermind behind the kidnapping is a new foe, Count Bleck, who sucks Bowser and Luigi away into a vortex. Mario, however, is transported to Flipside, the games hub world, where he discovers that he is the legendary hero that the inhabitants have been waiting for. In a typical RPG twist, Mario is tasked with finding the eight fragments of the Purity Heart to combat Count Bleck and save the world from certain destruction.

The story is decent and certainly adequate to string the games levels together. The dialog is well-written, comedic, and full of in-jokes for long-time fans of Nintendo's games. The only problem is that there's simply too much of it. The game has no problem dragging you into 20-minute long sequences of text and it becomes a chore to sit through before long. What's there is pretty good, but the plot would have benefited immensely from some trimming. 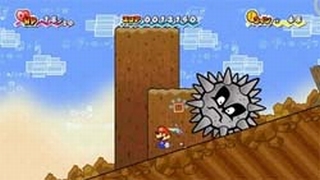 This enemy would end Marios career...


SPM's gameplay is almost a complete departure from past games. The last two Paper Mario games followed the RPG archetype pretty closely, but Super Paper Mario is far more of a platformer than an RPG. The game takes place on a 2D plane a la old-school Mario games, but with one caveat: plane-switching. With the press of a button, you can flip Mario's 2D world sideways and he'll be able to explore the world in 3D with territory you can't access on a 2D plane. It's a bizarre design choice, but its a truly unique mechanic and one that helps the game to stand out.

While SPM may be more akin to a platformer than an RPG, it hasn't lost its RPG roots. Your characters have stats that gradually increase as you level up, you shop for items, chat with the locals in towns, and gain a few new abilities as you work through the storyline. Youll also uncover more playable characters over the course of Marios adventure, and they bring further abilities and play mechanics to the table. Its an idea that the series hasnt used to this extent in a long time, and it succeeds in adding variety to the gameplay. The RPG elements definitely take a backseat to the platforming, however, so those expecting more of the same Paper Mario that they know and love may end up disappointed.

The game progresses like your standard 2D Mario game  the world is broken up into chapters consisting of a few lengthy levels which culminate in a boss fight. It sounds like classic Mario goodness on paper, but the level designs are disappointingly bland. Stages typically boil down to you running from point A to point B with minimal interference from enemies. The occasional puzzle finds its way into the levels in the form of a locked door you must open or an area that you cant simply run through like the rest of the stage, but these are generally very easy to solve and dont add much to the levels. The ability to flip the world into 3D does liven things up, but outside of puzzles and a few enemy encounters, there is seldom any real use for it. Completionists will love the fact that flipping into 3D uncovers hidden treasure, but anyone hoping to find hidden territory to explore or something more meaningful will be let down. The game does become more interesting as you gain new abilities and characters to try out, but there are still too few avenues for utilizing them. The end result is a game that doesnt have much meat on its bones. Theres little challenge and there isnt enough complexity to the levels to fully realize Super Paper Marios potential.

Combat is completely different from before, but this new system fails to impress. "Battles" usually consist of your character jumping on an enemy until it runs out of HP. It's similar to a standard 2D Mario game, but for an RPG like this, it's far too simplistic. The game does allow you to use items like potions and offensive weapons like shells and fireballs to fell your enemies, but the combat rarely challenges you enough to make it worth pulling up the menu to use them. Boss battles play out in much the same fashion, though these foes are imbued with some fancy special attacks and have a lot more HP than your standard enemy. Even so, there's little strategy involved, so these, too, disappoint. Unfortunately, the combat system is too shallow and easy to be particularly enjoyable or memorable. 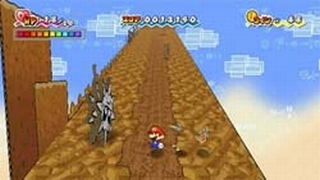 ...but Marios got a whole nother dimension on his side.


If there's one area where SPM truly excels, it's the visuals. Mario's adventure has the same clean 2D graphics as its predecessors and it still looks beautiful. The game's style is unmatched and it's difficult to find fault with the graphics from a technical standpoint. Flipping into a 3D world is seamless and the game's sheer creativity shines here, too. The audio doesn't fare quite as well, unfortunately. The music is generic and forgettable, and the sound effects suffer the same fate. It's a shame that the audio was little more than an afterthought, because such a beautiful game deserves equally rousing sound design.

Super Paper Mario is a decent game, but it has too many flaws to be truly recommendable. The level design falls flat, as does the combat; and the plodding pace of the storyline will put you to sleep in a hurry. If you're a serious fan of Nintendo's games, SPM is still worth a look, though it's best left as a rental.

If you enjoyed this Super Paper Mario review, you're encouraged to discuss it with the author and with other members of the site's community. If you don't already have an HonestGamers account, you can sign up for one in a snap. Thank you for reading!

© 1998-2021 HonestGamers
None of the material contained within this site may be reproduced in any conceivable fashion without permission from the author(s) of said material. This site is not sponsored or endorsed by Nintendo, Sega, Sony, Microsoft, or any other such party. Super Paper Mario is a registered trademark of its copyright holder. This site makes no claim to Super Paper Mario, its characters, screenshots, artwork, music, or any intellectual property contained within. Opinions expressed on this site do not necessarily represent the opinion of site staff or sponsors. Staff and freelance reviews are typically written based on time spent with a retail review copy or review key for the game that is provided by its publisher.