With the release of Mega Man X5, series director, Keiji Inafune, had completed his vision. As far as he was concerned, the X series was finished. The suits at Capcom thought otherwise. Mega Man X6 is little more than a cash-in on the franchise's popularity and is a soulless, unnecessary addition to the series.

Mega Man X6 directly follows the events of X5, so X is now alone in his hunt for the Mavericks. This time, there's an evil scientist named Gate behind the madness, but the game plays out in exactly the same fashion as every Mega Man title prior to this. X6 ramps up the amount of dialog and cut-scenes that you have to sit through in an attempt to give the series a more story-driven quality, but the writing is questionable, the characters are derivative, and the still pictures that accompany the dialog are laughably bad. You can skip through the cinematics with the start button, but as soon as you do, you'll be thrown into the worst the game has to offer: the gameplay.

Regardless of how stale the series might have become for some people, the X games have always offered some reasonably entertaining action. X6 falls so far short of the mark, though, that it's simply pathetic. The biggest offender is the level design. The design philosophy for this game seems to be "make everything as difficult as possible" rather than "make the game fun." Every stage in the game is filled with an unprecedented number of spikes, holes, and whatever else the developers could think of to annoy you. Now, imagine that in addition, there are random, harmful objects hurled at you on a regular basis. There's no real reason for it -- it just makes things more difficult. That's what Mega Man X6 is all about. There's no creativity in the challenges you face or in the types of levels you traverse. The game ultimately feels exactly like Mega Man X5 with the difficulty cranked up, and it simply isn't enjoyable.

Mega Man X6's combat is disastrous, which seems like an impossibility given that there have been more than a dozen Mega Man games before X6 that have had competent shootouts. X begins the game with his Falcon armor from X5, but he also has Zero's saber at his disposal from the start. Sounds cool, doesn't it? Well, it's not. For starters, the saber has been dumbed down, so you can't use any acrobatics or combo attacks -- you only get a single, sluggish attack. In addition, your weapons are significantly weaker than before and it will take several beam attacks or saber attacks to take down even the weakest of enemies. It takes seemingly forever to take down a foe and it's safer and more convenient to simply dash through an enemy and take a little damage than to actually duke it out with them. It's inconceivable why such an immediately obvious problem made it into the game, but it fits right in with the similarly shoddy level design. 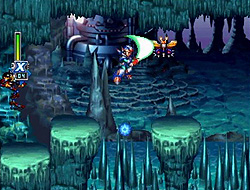 
The bosses in this game absolutely must be mentioned. Not because they're unique or fun to fight against, mind you. They're notable because of their absolutely insane names. The most level-headed names belong to the likes of Blaze Heatnix and Metal Shark Player, but the game goes as far as to bestow names like "Ground Scaravich" and "Infinity Mijinion" upon other bosses. There is no good reason for Mega Man to be fighting Eastern European dictators let alone whatever the hell a Mijinion is. The actual fights against these bosses are unspectacular and not even half as interesting as the names. If you've played any Mega Man game, you've played through these fights before.

X5 started incorporating customization into the series as well as a few ideas that made the game feel less linear, and X6 tries to expand on those concepts in order to breathe some life into the stagnating series. They weren't successful (notice a pattern?) The multiple sets of armor return along with parts that further augment your abilities, and rescuing captives now nets you additional health and weapons energy. Where the developers got creative was the Nightmare System that's intended to increase the replayability of the game. As you progress, some stages will be affected by "The Nightmare" which alters them to include further challenges like shrouding an area in complete darkness so you can't see and throwing more random, damaging objects into the levels. All this really means is that you'll either avoid those levels until the Nightmare leaves and you don't have to put up with such unfair nonsense, or you'll stop playing the game altogether after getting frustrated. Once again, a textbook example of bad game design.

The one area where X6 doesn't completely fail is the technical presentation, but even then, it isn't particularly impressive. The graphics have a reasonable amount of detail and the levels look somewhat unique, but they don't do anything that bests what X5 or even X4 offered and sometimes look worse than those games did. The sound effects are similarly bland and unimpressive, and X's yelps eventually becoming pretty grating. The audio does have one strong point though, and that's the musical score. The soundtrack is fantastic -- it sets the mood perfectly, it gives the stages a little bit more personality, and it just sounds good. Obviously, music alone can't save a game, but it's nice that X6 isn't a complete wash.

Regardless of whether or not you still like Mega Man, X6 is a disappointment. Almost nothing works as well as it should, and it feels more like an unofficial expansion to X5 than a fully-fledged sequel. Fans and non-fans alike, bow your heads, for Earth's hero has died.

If you enjoyed this Mega Man X6 review, you're encouraged to discuss it with the author and with other members of the site's community. If you don't already have an HonestGamers account, you can sign up for one in a snap. Thank you for reading!

© 1998-2021 HonestGamers
None of the material contained within this site may be reproduced in any conceivable fashion without permission from the author(s) of said material. This site is not sponsored or endorsed by Nintendo, Sega, Sony, Microsoft, or any other such party. Mega Man X6 is a registered trademark of its copyright holder. This site makes no claim to Mega Man X6, its characters, screenshots, artwork, music, or any intellectual property contained within. Opinions expressed on this site do not necessarily represent the opinion of site staff or sponsors. Staff and freelance reviews are typically written based on time spent with a retail review copy or review key for the game that is provided by its publisher.