This is the story of Taki Minase, your average college student. One day, he stumbles upon the key to a forbidden room in the school that is said to have been used for occult rituals several years ago. As any average college student would, he takes the key, enters the room, and finds a book known as the "Bible Black", which grants him magic powers... mainly for sexual purposes.

This is complete dreck, right?

Actually, you might be surprised. As ridiculous as the premise is, the game tries its darnedest to tell a compelling tale, and it actually succeeds for the most part. The mysteries surrounding the Bible Black are intriguing and the plot has a number of twists and turns throughout. There's quite a bit of detail to the storyline and there is a lot more time spent talking and contemplating situations than in the act, which may come as a shock for those expecting non-stop copulation. In general, the characters are relatively well-developed (and not just in the chest region), though there are a few too many who have little relevance to the plot. The dialog is typically well-written and humorous, and it succeeds admirably in conveying the character's personalities. At the same time, however, the game is marred by a number of noticeable typos that become a distraction before long. Even with these issues, when you consider that this game is intended to be smut, the plot is still more interesting than it has any right to be. 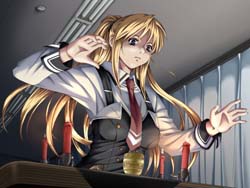 Saeki is is an occult-loving girl. Also, you can screw her.

Do you think rape is a bad thing, or do you enjoy rape?

If you think rape is a bad thing, go ahead and forget about ever playing this game. If you enjoy rape, that is disturbing and you've probably already got plans that don't involve anime characters. The vast majority of the sex scenes in Bible Black involve some sort of rape. Sometimes you're a participant; sometimes, there are 20 participants. It's unclear how so much rape can take place at one school over the course of only a few days, but apparently, Minase's school is a magical place. This might be a hentai game, but it's difficult to shake the feeling that it could have been so much better in the absence of these ridiculous sex scenes. Even so, this game will have its audience thanks to the rape moments, creepy as it may be.

Calling Bible Black a game is a technicality. The gameplay consists of reading text and occasionally choosing which action to pursue between two or three possibilities. Unfortunately, you only make a decision once every ten minutes or so. What's worse, the decisions you make typically don't even matter. Sometimes, choosing the wrong option will merely result in Minase telling you "no, that's not a good decision." So, what's the point? The game even has the audacity to give you decisions with a single option. That's right -- a choice you make where there are no alternatives. When the game is that desperate to incorporate interactivity, you have to wonder why they even bothered to make Bible Black a game in the first place. 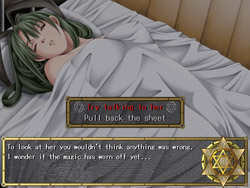 
Occasionally, you'll get lucky (no, not like that) and be able to make a decision that alters how the story progresses. These important choices will impact which of the game's 12 endings you see. Including a dozen endings is an interesting idea in theory, but usually, making the "wrong" choice will net you a bad ending immediately. All you need to do is load a save right before you made that choice and remedy your mistake. This results in a game that requires no actual thought and that has literally no challenge whatsoever. The so-called "gameplay" is completely pointless, and the developers essentially admitted it by including an auto-play option that plays the game for you.

The visuals in Bible Black are a mixed bag. The game is composed entirely of still pictures, but the backdrops are decent and the character art that appears in the foreground is excellent. That would be fine for a dating-sim, but Bible Black gets too ambitious and tries to incorporate fight scenes into the game. These parts consist of one character standing on screen and text informing you that a fight is going on. Sometimes the screen shakes. There's simply not enough here to make such scenes even slightly effective or interesting. The game's audio is difficult to complain about, however. Most of the game's lines are voiced in Japanese which helps to define the characters, and the music is surprisingly good. You might be expecting your typical late-night movie soundtrack, but the songs are all fairly well-composed and aren't particularly cheesy.

If you enjoyed this Bible Black review, you're encouraged to discuss it with the author and with other members of the site's community. If you don't already have an HonestGamers account, you can sign up for one in a snap. Thank you for reading!

© 1998-2021 HonestGamers
None of the material contained within this site may be reproduced in any conceivable fashion without permission from the author(s) of said material. This site is not sponsored or endorsed by Nintendo, Sega, Sony, Microsoft, or any other such party. Bible Black is a registered trademark of its copyright holder. This site makes no claim to Bible Black, its characters, screenshots, artwork, music, or any intellectual property contained within. Opinions expressed on this site do not necessarily represent the opinion of site staff or sponsors. Staff and freelance reviews are typically written based on time spent with a retail review copy or review key for the game that is provided by its publisher.