When Nintendo tries something new with the Zelda series, it usually pays off. Moving to three dimensions in Ocarina of Time resulted in what many consider to be the best Zelda game of all time, and experimenting with an ultra-cute graphical style worked surprisingly well in The Wind Waker. Nintendo's at it again in the direct sequel to The Wind Waker, The Legend of Zelda: The Phantom Hourglass. What sets this apart from past games is that the entire game is played on the DS' touch screen, but this experiment doesn't work as well as you'd hope.

Link's journey begins with him aboard Tetra's pirate ship once again. You're on the search for treasure, just as all pirates are, with your target being a mysterious ghost ship. A minute later, this ship appears. As luck would have it, instead of obtaining a bounty, Tetra is swept away, Link is thrown off the boat, and now it's up to him to save Tetra once again. The story is sparse, uninteresting, and only included as a formality on the part of the developers. The obvious focus is on the gameplay, but Phantom Hourglass doesn't fare much better there.

As you'll immediately realize upon starting the game, PH brings back the top-down view that the SNES and GBA Zelda games used. This makes everything feel a lot more like those classic entries, but with one major caveat: the touch screen controls. The entire game is played by manipulating the DS' features -- you'll literally never need to use a button, and that's just as well, because you can't use them for anything but menus. To run, you hold the stylus on the screen in the direction you want to move, you swipe the screen with the stylus or poke at an enemy to attack, and you can draw paths for boomerangs and bombs to follow when you throw them. Unfortunately, the control scheme is a mess that ends up bogging down the game as a whole. The motions you make on the touch screen to run and attack are nearly identical, which means that in frantic situations, it's far too easy to attack when you want to run somewhere and vice versa. Even simple actions like trying to pick up a bomb can end with you striking the bomb accidentally and taking damage. It becomes pretty frustrating and can make you feel helpless if you're in a situation that requires any amount of precision. The microphone is also a mandatory part of playing this game -- there's probably not another game that requires you to blow into the microphone as much as this. Unfortunately, blowing into your DS to activate windmills and clean off dusty maps is stupid and adds nothing meaningful to the game, and that's far from the only lame use of the DS' features to be found here. These instances aren't cute or clever. Just unnecessary. 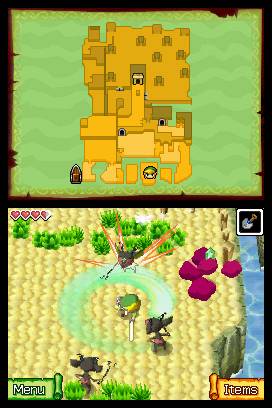 
That's not to say that the entire control scheme is a disaster, though. The concept of drawing a path for your boomerang to follow is brilliant and this is the first Zelda game where you can throw bombs and other items accurately, thanks to the touch screen. You can even write notes to yourself on maps so that you remember how to solve puzzles or where treasure has been hidden. Those ideas are novel, and there's a definite time and place to use the DS' functionality, but Nintendo's insistence on incorporating DS features into everything ends up becoming the game's biggest failing.

The game's design is decent, though derivative. This is a Zelda game, so you'll spend most of your time in dungeons. No surprises there. Unfortunately, the dungeon layouts aren't very interesting and don't even attempt to do anything that the series hasn't done before. There's puzzles to solve, but they aren't challenging nor creative. You have enemies to fight, but when you just poke them to death with your stylus, what's the point? The core gameplay is the very definition of "ho-hum." Even the boss fights disappoint. They all suffer from the "been there, done that" syndrome that the dungeons do, and while there are some mildly amusing fights that utilize the DS' features well, they all boil down to a rousing game of "poke the enemy until they die" and little else. Even the lame stealth segment from Wind Waker is back, except this time, there's several such sequences. They're just as boring as before and it's unfathomable why Nintendo would see fit to bring them back. Despite the numerous shortcomings, the dungeons still aren't terrible, but for a series known for creative and highly polished dungeon crawls, it's quite disappointing to see this game playing it so safe and failing to live up to expectations.

Following in Wind Waker's footsteps, seafaring is once again a significant portion of the game. Nintendo actually did listen here and reduced the world map to a more reasonable size in an attempt to cut back on the amount of time you'll spend sailing. They succeeded in reducing the amount of time you'll spend out at sea. They also killed the sense of exploration. In this miniaturized world, the mini-islands from Wind Waker have been omitted, so the fun of exploring the world is now completely gone. Why, then, is sailing still in the game? All you can do now when sailing between point A and point B is poke enemies and jump over randomly appearing obstacles. It's stupid and pointless, because there's no longer anything to discover or any real reason to sit through these tedious sailing segments. The towns don't make up for this lack of exploration either, as these sleepy locales have nothing to do in them aside from a few boring side quests that the citizenry ask of you. Between the smaller scale and the lack of anything particularly fun to do outside of dungeons, Phantom Hourglass is severely lacking in anything epic, which is surprising and sad for a series that has always been overflowing with such elements. 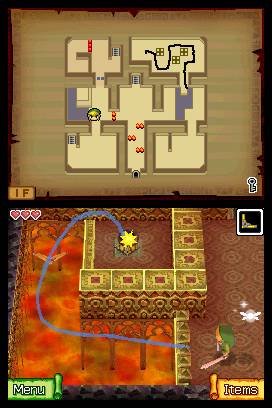 The boomerang is a smart use of the touch screen. Other things... not so much.


Where Phantom Hourglass doesn't disappoint is its technical side. The graphics once again take on the beautiful cel-shaded look that Wind Waker used, and it looks absolutely gorgeous on the DS' screen. Everything has a visual pop to it that other games simply lack, and the animation is fluid and simply perfect for this game. The aural presentation is impressive, with music that ranges from good to great and decent sound effects. It's clear that this game had quite a budget for a DS game, because the developers squeezed out an astoundingly beautiful game that sounds quite good, as well.

Is Phantom Hourglass a bad game? No, but it's a highly disappointing one. In a series known for phenomenal dungeons, a vast world to traverse, and astoundingly fun swordplay and exploration, this entry simply comes up short. The touch screen functionality has a few good ideas, but far too many bad ones, and the gameplay ultimately feels stale. It's worth a rental, particularly for diehard Zelda fans, but if you're contemplating whether or not to add Link's latest adventure to your collection, leave it on the shelf.

If you enjoyed this The Legend of Zelda: Phantom Hourglass review, you're encouraged to discuss it with the author and with other members of the site's community. If you don't already have an HonestGamers account, you can sign up for one in a snap. Thank you for reading!

© 1998-2021 HonestGamers
None of the material contained within this site may be reproduced in any conceivable fashion without permission from the author(s) of said material. This site is not sponsored or endorsed by Nintendo, Sega, Sony, Microsoft, or any other such party. The Legend of Zelda: Phantom Hourglass is a registered trademark of its copyright holder. This site makes no claim to The Legend of Zelda: Phantom Hourglass, its characters, screenshots, artwork, music, or any intellectual property contained within. Opinions expressed on this site do not necessarily represent the opinion of site staff or sponsors. Staff and freelance reviews are typically written based on time spent with a retail review copy or review key for the game that is provided by its publisher.