Phoenix Wright just can't seem to catch a break. Not even a year after the second game in the fan-favorite lawyer series was released, Wright returns in what is his strongest game yet. The third installment, Phoenix Wright: Trials and Tribulations, is a fantastic conclusion to the trilogy that fans of the series will love.

The Phoenix Wright series has always had more in common with interactive novels than actual games. Sure, there's gameplay, but the focus and appeal of the franchise is the storyline. The basic premise is that you are Phoenix Wright: a master defense attorney who protects his clients from a "guilty" verdict even in the face of insurmountable odds. Trials and Tribulations features five lengthy cases that play out in exactly the same fashion as cases from the last two games. What has changed is that most of the cases are interconnected this time around, so characters from one case will often play a significant role in a future case. This makes the whole game feel far more cohesive than before, and the build-up of characters and plot points makes the final case incredibly satisfying and memorable, especially for long-time fans. Phoenix isn't the only playable character this time around, though, as Mia Fey, Phoenix's late mentor, stars for part of the game. Her exploits take place several years in the past and provide quite a bit of character background, which is the one place where past games' narratives have generally been lacking.

The endearing characters are perhaps the game's biggest asset. Literally every person you meet is interesting and genuinely likable. The witty, humorous dialog absolutely sells these characters and gives them a sense of uniqueness. The charming and often hilarious animations in the game bring everyone to life and it's impressive how effectively characters' mannerisms convey their personalities. There's a host of new characters in T&T, and some, like Prosecutor Godot, are among the coolest characters in the entire series. Even with several new people to meet, there's also a fairly large cast of returning characters that series fans will be overjoyed to see again. Unfortunately, this is also something of a double edged sword, as people who haven't played the last two games will be a bit lost concerning the significance of certain characters and events. This installment can still be enjoyed by people in that boat, but the storyline will have a far greater impact on people who are caught up with the last two games. 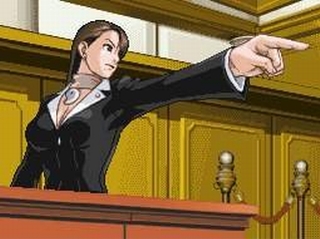 This represents everything missing from the legal system today.


As in both prior installments, your time as a lawyer is divided between dramatic court battles and investigating crime scenes. What, exactly does a "dramatic court battle" entail? Imagine a civilized court proceeding, but infused with yelling, finger-pointing, and the slamming of hands on desks. The courtroom gameplay consists of cross-examining witnesses and digging out the contradictions in their testimony. When you find a contradiction or something suspicious, you can present evidence to prove that the witness is lying or press the witness for more details. This sounds pretty mundane and ordinarily, it would be. However, the testimonies you'll pick apart are basically logic puzzles designed to test your mettle which makes picking out the contradictions fun and satisfying. If you present irrelevant evidence, the judge will deduct from your "life bar" and eventually hand down a guilty verdict if you're too overzealous. However, if you present evidence at the right time, your witness will panic, dramatic music will begin to play, and a flurry of objections will echo across the courtroom. There's admittedly more watching than playing involved in the court of law, but what's there is enjoyable and oddly addictive.

As you'll quickly learn, evidence is everything in court. To get enough of it, you'll have to scour crime scenes and do some investigation between court sessions. In these scenes, you'll talk to people who are somehow involved with the crime at hand to get information about what happened and examine the scenery to find hard evidence to be used in court. The psyche-lock system returns from the second game and works in exactly the same manner as before. For those unfamiliar with this concept, when you run across somebody who's hiding a secret about the case, you'll need to present the appropriate evidence to break the "psyche-locks" protecting their secret. Doing so successfully will make them spill the beans and is necessary to make the story progress. It's more or less the same sort of logic puzzle that you'll find in the court segments, but these bits keep the exploration from feeling overly simplistic. The investigations aren't particularly complicated, but they do provide some much-needed variety for the game.

Being a defense attorney is fun, but Wright's latest outing still has a few shortcomings. The most significant problem is that when you're stuck and unsure of what evidence to present or where to go, the game can become an exercise in frustration. The game is completely linear, so there's only one answer to every puzzle. If your mind is drawing a blank, you'll need to search aimlessly for the action that will make the storyline progress. While these annoying situations seem to pop up less frequently than in past entries, such instances still appear more often than they should for the third installment in a series. It's also quite disappointing that there is simply nothing new here. This is the most polished Phoenix Wright game, but if you've played either of the other two games, you've already seen everything this has to offer. This will be little more than a rehash in some people's eyes, which is a shame because the game does offer the strongest storyline of the series. 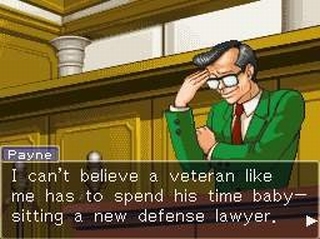 
Like the gameplay, Phoenix Wright's technical side is minimalist, but effective. The graphics are composed of static 2D backgrounds and sparse animation. At the same time, however, the backgrounds are fairly detailed and the character animations exude more personality than you'd think possible in a portable game, so you won't feel like the visuals are particularly lacking. The audio is surprisingly good, especially in regards to the soundtrack. The music sets the mood well in the story segments and succeeds in making courtroom duels feel epic. The sound effects are adequate and everything from Phoenix shouting "objection" to the strangely satisfying sound of text scrolling simply works.

Trials and Tribulations is a great game and the strongest entry in the Phoenix Wright trilogy, but it's disappointing that so little has changed and that some of the problems that have plagued the series from the start are still around. Even so, if you've stuck with the series and still enjoy it, there's really no reason why you wouldn't love the conclusion.

If you enjoyed this Phoenix Wright: Ace Attorney - Trials and Tribulations review, you're encouraged to discuss it with the author and with other members of the site's community. If you don't already have an HonestGamers account, you can sign up for one in a snap. Thank you for reading!

© 1998-2022 HonestGamers
None of the material contained within this site may be reproduced in any conceivable fashion without permission from the author(s) of said material. This site is not sponsored or endorsed by Nintendo, Sega, Sony, Microsoft, or any other such party. Phoenix Wright: Ace Attorney - Trials and Tribulations is a registered trademark of its copyright holder. This site makes no claim to Phoenix Wright: Ace Attorney - Trials and Tribulations, its characters, screenshots, artwork, music, or any intellectual property contained within. Opinions expressed on this site do not necessarily represent the opinion of site staff or sponsors. Staff and freelance reviews are typically written based on time spent with a retail review copy or review key for the game that is provided by its publisher.