If there's a genre that 2007 has been kind to, it's the first person shooter. The market has been absolutely flooded with shooters and many of them have been very good, making it that much more difficult for a new game to stand out. Nevertheless, Unreal Tournament III is easily one of the strongest entries in the genre this year, especially for fans of multiplayer shooters.

For those not acquainted with the Unreal Tournament series, all you need to know is that the game is fast. Lightning fast. Almost uncontrollably fast, but not quite. There hasn't been a shooter this speedy in years, which makes UTIII feel quite fresh and different from the more methodical competition. From the moment you start a match, you're in the fray. You don't need to take time to prepare -- you grab the nearest weapon and go. If you die, there's no real consequence -- you won't sit out for the round or wait in time-out for a few seconds -- you're back on your feet immediately and fighting again. It's not unlike an arcade game and this breakneck pacing gives UT a pick-up-and-play quality that few other multiplayer shooters can claim to have. That's not to say that there's no depth to the game, though. UTIII is very rewarding for devoted players who take the time to practice, and there's truly no limit to how much you can improve.

Of course, game concepts alone won't make a multiplayer game special -- the most important aspect of a game like this is level design and it is absolutely stellar here. UTIII includes dozens of maps for its various modes and all of them look and feel unique. Levels are strewn with powerful weapons, vehicles, and teleporters to avoid downtime in a match and are the map layouts are designed to minimize confusion so you'll never feel like you're wandering through a maze trying to find somebody to kill. For the most part, the maps are tightly-woven enough to remove any dead space or places to hide, which all but eliminates the problem of somebody camping or dominating the map. Essentially, the major annoyances that commonly plague multiplayer maps have been alleviated which makes the entire game feel really solid. The level selection brings back a few favorites from past UT games and renovates them in the process, but the bulk of the levels are entirely new and easily some of the strongest designs the series has seen.

The carnage is as enjoyable as ever thanks to a large helping of genuinely cool weapons and vehicles. The weapons are identical to those found in UT 2004 with the exception of few additions like the sniper rifle, but all of the guns have received some balance tweaks. Needless to say, weapons are all still fun to fire, do devastating damage, and are still among the more unique weapons in an FPS. The most noteworthy part of your arsenal, however, is the vehicles. From land cruisers to giant, War of the Worlds-esque monstrosities, there's always some way to commit vehicular homicide. Not only are the vehicles fun -- there's a lot of them, too, and they all play differently. While other countless other games have offered vehicles, UTIII has an unprecedented number of them and is completely unmatched in the sheer visceral fun of piloting them. 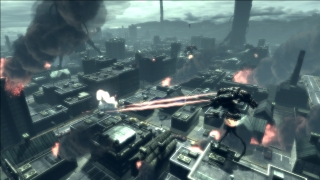 If you cant tell, this is a game about destruction.


The main attraction in UTIII is the multiplayer modes which consist of the standard Deathmatch and Capture the Flag modes, as well as a Warfare mode that's new to the series. Warfare is a team-based game where your goal is to destroy the core located at the enemy base. To do this, you must capture nodes located between your base and the enemy base by either carrying an orb from your base to the node or by stepping on an untaken node and then building up a defensive shield by shooting at it with the Link Gun. Of course, the other team is trying to do the exact same thing, so these matches can end up being very strategic as you begin to consider which nodes you want to protect, which optional nodes to seek out and capture for the additional resources they yield, and what path to take to get to the enemy's base. It's a highly enjoyable mode and it feels vastly different from the other game types. With three tangibly different modes in the game, there's just enough to the game to keep it feeling fresh, though it would have been nice to see the return of some modes like Onslaught from previous entries. Still, theres enough here to keep you going for a long time.

Interestingly, the developers also tried to offer a much more robust single player experience this time around, which is a dramatic change of pace for the series. Now, there's a single player campaign mode complete with a storyline and cinematics. Don't get too excited -- it's pretty awful. The storyline is painfully bad and amounts to little more than your standard "wronged soldier who wants revenge" plot. You can already fill in the blanks. Even so, the story tries to be alarmingly serious. There are evil corporations, religious cults, and seemingly a whole mythology behind the plot. But nothing is ever explained and the dialog and cinematics are so bland that you'll never care about a single word the characters utter. The whole storyline is bad to the point where you can't even laugh at it -- it's just a bit sad.

The actual gameplay in the campaign mode is simply a series of skirmishes against the AI with pre-selected modes and maps. You'll play most of these matches alongside the same three allies, and you can issue orders for how you want them to act in battle. Unfortunately, you don't have as much control over your allies as you should since you cant issue orders to individual allies or select from more than a mere handful of commands. As a result, your teammates can be an annoyance in modes like Warfare where you require some sort of strategy. The campaign has a few stabs at originality like the ability to play optional matches to earn a perk for the next story-centered battle and cards you can play before a match that provide you with a given advantage. None of these ideas work as well as the developers intended, though, as they are pretty pointless in execution. The entire mode feels undercooked, unfortunately, and it's really not worth spending much time on. 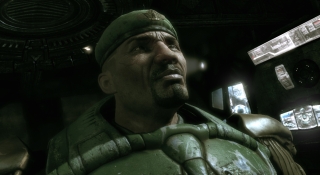 Whats this characters name? Nobody cares.


Luckily for solo players, there is still a skirmish mode where you select a mode, a map, how many bots you want to have playing, and the difficulty of the bots, and start playing. This is really the only single player mode you should bother with, because it's far better than the campaign. The bots are imbued with some especially good AI and if you ramp the difficulty setting up, they become disturbingly good at putting you in your grave. Even if you don't have anyone to play with and you can't play online, you can still get a very enjoyable Unreal fix.

Blowing people to bits has seldom looked this good. On the technical front, UTIII has some absurdly detailed textures and is very well-optimized, so unless you're trying to play the game on a computer that's several years old, you should be able to get a very smooth, consistent frame rate. What's truly noteworthy, however, is the artistic style. UTIII is something of a change for the series as it's darker and grittier than past entries have been, but it works well for the game. Guns look powerful, deaths look painful, and environments are believably war-torn. Alien worlds have an appropriately bizarre aesthetic and none of the levels look overly similar. Unreal Tournament III was one of the first next-gen titles to be showcased for its graphics, and now that the game is finally here, it certainly doesn't disappoint.

The audio side of things is something of a mixed bag. Guns sound like they should, the sound of people getting gibbed is as gruesome as you would hope, and the announcer still yells "killing spree" in the perfect voice. The music is decent enough, though it's little more than background noise to compliment the chaos of the matches. Where things go wrong, however, is the voiceovers for the characters. In an attempt to give the characters more personality, Epic gave the bots a few lines of dialog, all of which are cheesy, obnoxious, overused, and completely unnecessary. It's a stupid design decision, but thankfully, you can turn off the voices in the options menu, and you should do so immediately.

All things considered, Unreal Tournament III is a remarkable game. It's easy to jump into, difficult to master, and a blast to play at any skill level. Perhaps most importantly, though, is the fact that there's nothing quite like this out there. UTIII's speed makes the competition feel sluggish by comparison and few other games offer the same caliber of level design and polish. The single player campaign may disappoint, but for multiplayer shooter fans or those content with bots, there are few games that even come close.

If you enjoyed this Unreal Tournament 3 review, you're encouraged to discuss it with the author and with other members of the site's community. If you don't already have an HonestGamers account, you can sign up for one in a snap. Thank you for reading!

© 1998-2021 HonestGamers
None of the material contained within this site may be reproduced in any conceivable fashion without permission from the author(s) of said material. This site is not sponsored or endorsed by Nintendo, Sega, Sony, Microsoft, or any other such party. Unreal Tournament 3 is a registered trademark of its copyright holder. This site makes no claim to Unreal Tournament 3, its characters, screenshots, artwork, music, or any intellectual property contained within. Opinions expressed on this site do not necessarily represent the opinion of site staff or sponsors. Staff and freelance reviews are typically written based on time spent with a retail review copy or review key for the game that is provided by its publisher.