If someones ever told you that youll never be good at something, chances are that you tried to prove that person wrong. Unfortunately, thats also what Konami tried to do after critics lambasted its PSP shooter, Coded Arms. More than two years have passed since that games release, but Coded Arms: Contagion makes it clear that Konami hasnt learned from its mistakes.

Contagions story is laughably cliché, even by FPS standards. You are Major Jacob Grant, an elite special forces agent tasked with infiltrating a computerized combat simulation and assessing its effectiveness for the benefit of your superior, Major Clark. This is perhaps the most uninspired premise in years. Eventually, things go horribly wrong in the simulation and youll discover that there are some terrorists involved. You really have to wonder why they even bothered writing this dreck. Unfortunately, the rest of the game doesnt fare particularly well, either. 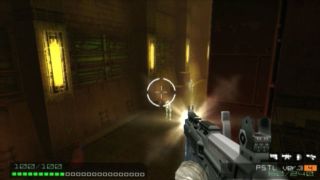 This is the extent of Contagions creativity

One of the games biggest sore spots is also the one youll immediately be introduced to: the controls. The PSPs control layout isnt conducive to first-person games, especially considering the lack of a second analog stick. That didnt stop the developers from trying, though. You move with the analog nub and aim by using the four face buttons. The d-pad serves a number of functions including reloading your weapon, switching weapons, and zooming in with certain guns. If this sounds unintuitive, thats because it is. Even after you take some time to get used to the controls, they never feel natural. This immediately hampers whatever enjoyment you might get out of the game.

Perhaps in an attempt to further the futuristic setting, the gameplay has fallen out of a time warp. From 1996. Seemingly every poor design choice that has plagued FPS games over the past decade is on parade here. Copy-pasted corridors, exploding barrels, enemies who stand still while being shot in the face  its difficult to understand how all of these lame ideas made it into a single game. The level designs are utterly uninteresting and feel amateurish at every turn. The maps have no creativity or thought to them which makes the entire game horribly repetitive. Some shooters lack good level design but are saved by enjoyable combat. Unfortunately, the shooting doesnt do Coded Arms any favors, either. All of the standard weapons you expect from a shooter are present, ranging from a pistol to a sniper rifle, but none of them are particularly fun to fire. Your braindead enemies often take far too long to kill, and the complete lack of animation for when your adversary takes damage or dies leaves you with gunplay thats devoid of entertainment value.

A couple of somewhat interesting wrinkles enhance the otherwise uninspired gameplay. The first is a hacking mini-game that youll need to play to open certain doors. In these segments, you are presented with two columns that contain a set of numbers. Your goal is to find which number is in both of the columns before time runs out. If you succeed, the door opens, but if you fail an alarm sounds and an enemy will swoop in to attack you. While the effect appears to be unintentional, youll really feel motivated to succeed at hacking simply so you can avoid any combat that isnt absolutely required. Hacking is more challenging than it sounds and its a mildly amusing way to break up the monotony. The other attempt at adding depth to the gameplay is the upgrade system. As you explore the stages, youll occasionally find an item that you can use towards an upgrade for your weapons or armor. Youll then be able to alter a number of different stats including a given weapons power, how much ammo is in a clip and how much health you have. The upgrade system is surprisingly interesting, but given how weak the combat is, it still doesnt provide much incentive to play through the game. Unfortunately, Contagions core gameplay simply isnt fun or enjoyable and the developers few stabs at originality, while amusing, cant save it.

New to Contagion is an online multiplayer mode. You probably wont be able find anybody to play with, though you likely wouldnt want to play this game against other people anyway. The controls make it all but impossible to enjoy the game in a competitive setting, and the awful map design of the single player mode is retained here. The multiplayer is nothing more than an afterthought, and theres no reason to bother with it. 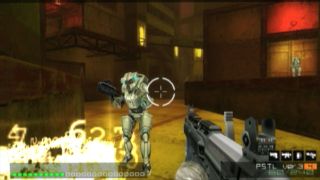 From a technical perspective, Coded Arms also fails to impress. The graphics arent particularly bad  they have ample detail and the character models look decent. Where the visuals falter is in the painfully generic look of every single level. The games vistas consist of dark warehouses and complexes that have the occasional neon light thrown in to provide a futuristic touch. Its obvious that as little work went into the games artistic designs as its level designs. In motion, Contagion is a mess as the frame rate is constantly choppy and occasionally poor enough to render the game unplayable. Sound is almost nonexistent. The music has less character than that of a Game Boy game and there doesnt seem to be a single sound effect outside of the weapon sounds. As with the rest of the game, both the video and audio are clearly the result of a complete lack of effort.

Contagion isnt quite an atrocity, but there really isnt a positive adjective that can be used to describe it. Nothing stands out and its never particularly enjoyable. This is the second failure for the Coded Arms series, and its unlikely that anybody wants to find out if the third time will be the charm.

If you enjoyed this Coded Arms: Contagion review, you're encouraged to discuss it with the author and with other members of the site's community. If you don't already have an HonestGamers account, you can sign up for one in a snap. Thank you for reading!

© 1998-2021 HonestGamers
None of the material contained within this site may be reproduced in any conceivable fashion without permission from the author(s) of said material. This site is not sponsored or endorsed by Nintendo, Sega, Sony, Microsoft, or any other such party. Coded Arms: Contagion is a registered trademark of its copyright holder. This site makes no claim to Coded Arms: Contagion, its characters, screenshots, artwork, music, or any intellectual property contained within. Opinions expressed on this site do not necessarily represent the opinion of site staff or sponsors. Staff and freelance reviews are typically written based on time spent with a retail review copy or review key for the game that is provided by its publisher.