Rainbow Six Vegas is not a Rainbow Six game. Sure, it shares the same title, but Ubi has thrown out pretty much everything that defined Rainbow Six. Instead, this entry is more akin to Splinter Cell than anything. Bad move, right? Actually, its the best thing to ever happen to the series.

Vegas puts you in the shoes of the generically named Logan Keller, the leader of a three-man counterterrorist squad. So where in Sin City does Logan's adventure begin? Mexico. Yes, for the first hour or two of Vegas, youll be in the same bland Mexican setting that appears in seemingly every game in the Tom Clancy series. While it might seem that this game is an immediate disappointment, the Mexican level is a surprisingly enjoyable jaunt that serves as a training mission and effectively introduces the terrorist leader, Irena. In your journey through the abandoned streets of Mexico, it will become very clear that this latest Rainbow Six has abandoned the emphasis on realism and methodical pacing that previous games in the series offered. Instead, this game feels far more like a standard FPS, but with one key addition: cover. The gameplays defining characteristic is the brilliant cover system, which allows you to cling to walls, crates, or any other object, in order to shield yourself from a hail of bullets. From there, you can peek out and fire away at your enemies, or you can simply blind fire and remain well-defended. This wrinkle adds a surprising amount of depth to the familiar shooter mechanics, and youll certainly need all the cover you can get because enemies are more than capable of ending your mission by force.

While the core gameplay has changed dramatically, this is still a squad-based game. As the leader of the Rainbow team, you have two underlings at your disposal. You have a decent amount of control over them as you can order them to move to a specific location, have them assault a room, or issue a variety of other commands depending on how you want to approach a situation. Older Rainbow Six games were never praised for their squad member AI, but that trend is finally reversed in Vegas. Your teammates will take cover intelligently and reliably follow your commands, so you never feel like youre babysitting them. As a result, this is the first game in the series to offer truly enjoyable team-based gameplay since you feel like youre working with your squad rather than contending with their stupidity.

All of these basic gameplay mechanics are introduced to you during your mission in Mexico. Unfortunately, things go horribly awry for Logan & Co. as soon as you meet face to face with the terrorists leader. Your teammates are captured and the terrorists flee the scene believing that theyve managed to kill you. Of course, the game would be awfully short if they succeeded, so it turns out that Logan remains among the living. When you get back to your chopper, youre informed of a situation in Las Vegas which is believed to be connected to the incident in Mexico, and the real battle finally begins. Like the gameplay, the plot has received an overhaul as it is not only more prominent than in other Clancy games; its far better. Bits of the plot are effectively sprinkled throughout your missions and the story always feels like more than a mere excuse used to tie together the levels.

Immediately upon reaching the streets of Las Vegas, youll be greeted by countless glowing lights scattered everywhere you look. The developers nailed the look of the city and the whole area feels alive. You wont have much time to admire the sights, though, because the second you hit the ground, youre in the fray. Terrorists are hidden everywhere around you, and cover becomes a constant necessity since you never know where you might get shot from. Las Vegas composes the perfect playground for these shootouts since its littered with objects that both you and your enemies can hide behind. Luckily, youll have a fighting chance against the terrorists because Logan is armed to the teeth. You carry three guns with you at a time, and theres quite a variety to choose from. Every weapon has strengths and weaknesses that are displayed when choosing your arsenal and you can also select from a variety of scopes for your weapons. Best of all, the guns are fun to use. Every gunshot has a distinct, deep sound, and the recoil of the weapons also adds to the feeling of power behind the guns. There are few things more fulfilling than peeking out from behind your cover, firing a few, well-placed rounds, and seeing your enemy collapse as a spray of blood hits the wall behind him. Vegas nails the intensity that so many shooters lack, and it makes the combat constantly enjoyable. It might be a dramatic change of pace from previous Rainbow Six games, but the developers were remarkably successful at reinvigorating the series with this combination of quick, brutal combat and cover tactics. 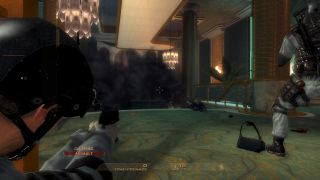 Whats hiding in the smoke? Whatever it is, it wants to kill you.

This game might have a lot more in-your-face combat than R6 purists would like, but you still cant fire away with reckless abandon. If you arent tactical with your approach to situations, you will be turned into Swiss cheese. At the same time, the game is far more forgiving than past titles have been since you can take quite a few shots without dying. When youre hit, the screen blurs and everything becomes increasingly obscured as you take further damage. Of course, taking too much damage will result in an untimely death. Unfortunately, death is a somewhat frustrating experience due to the games checkpoint save system that places you back at a set location when you die. It becomes a problem if you die halfway through a battle because youll have to replay the entire thing until you make it through the fight in one piece. There is literally no good reason for omitting a quick save option especially given how commonplace such a feature has become, and this is really the games one significant annoyance. Still, its not a crippling flaw and the game is more than entertaining enough that this wont deter you from playing.

The single player mode of Rainbow Six Vegas will take around eight to ten hours to finish the first time through. Thats a bit short for a tactical shooter, but during that time, youll never feel like the game is becoming repetitive or stale. Nevertheless, theres quite a bit for you to do even after youve finished the game. First, theres the Realistic difficulty setting, which plays a bit more like the old Rainbow Six games because its far less forgiving when you get shot. Its an enjoyable challenge that gives the game a somewhat different feel, so its worth trying out. The game also has four-player cooperative play for the story mode which can be extremely fun, especially if youre playing with three friends equipped with microphones. On the competitive side of things, Vegas has a variety of multiplayer modes that cover everything from a standard deathmatch to a capture-the-flag mode. Fights get to be pretty manic and battles support up to 16 players. The cover system transfers over to the multiplayer without a hitch and greatly enhances the game. This really doesnt feel like a run-of-the-mill multiplayer FPS, which is quite a relief.

From a technical standpoint, Rainbow Six Vegas is very impressive. On the visual side, the game has some spectacular lighting effects that bring Sin City to life, and all of the characters models and scenery have a lot of complexity to them. The motion blur effects also add quite a bit to the atmosphere and arent overused. The PC version looks incredible and greatly surpasses both the Xbox 360 and Playstation 3 versions of the game, provided that you have the hardware to run it. Unfortunately, that can be the deal breaker for this version of the game, as Ubi failed to optimize the PC version adequately. If you have anything less than a 7800 series video card, you should opt for one of the console versions instead, because the games performance will be very poor. If you do have hardware thats up to snuff, particularly something from the 8800 series of video cards, Vegas becomes something truly beautiful in motion. 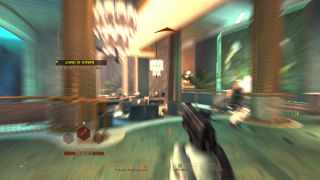 Motion blur adds a lot to the games visuals

The games audio is pretty much pitch-perfect. The voice acting is good and the dialog itself is well-written, so the constant chatter succeeds in enhancing the game rather than detracting from it. The sound effects are also very good and everything from explosions to footsteps sounds spot-on. Whats truly noteworthy about the aural presentation is the soundtrack. The music isnt a mere formality like it is in the vast majority of shooters  its always used to enhance the mood. When youre infiltrating an empty area, the music plays softly and serves to build up tension. When youre discovered by the enemy, however, new instruments come into the song, the volume cranks up, and the audio gives these situations an intensity that they otherwise couldnt have achieved. This is done in such a subtle manner that it blends into the game seamlessly. The masterful use of audio benefits Vegas immensely, and its truly a shame that so few games utilize sound this effectively.

Rainbow Six Vegas is different. Its nothing like previous entries in the series and its gameplay revolves around a cover system that few other games have attempted and that even fewer have pulled off successfully. Fans of the Rainbow Six series who arent completely put off by the changes would do well to check this game out and anybody looking for a more strategic take on the FPS genre will definitely find it here.

If you enjoyed this Tom Clancy's Rainbow Six: Vegas review, you're encouraged to discuss it with the author and with other members of the site's community. If you don't already have an HonestGamers account, you can sign up for one in a snap. Thank you for reading!

© 1998-2021 HonestGamers
None of the material contained within this site may be reproduced in any conceivable fashion without permission from the author(s) of said material. This site is not sponsored or endorsed by Nintendo, Sega, Sony, Microsoft, or any other such party. Tom Clancy's Rainbow Six: Vegas is a registered trademark of its copyright holder. This site makes no claim to Tom Clancy's Rainbow Six: Vegas, its characters, screenshots, artwork, music, or any intellectual property contained within. Opinions expressed on this site do not necessarily represent the opinion of site staff or sponsors. Staff and freelance reviews are typically written based on time spent with a retail review copy or review key for the game that is provided by its publisher.