There was a time when Capcom was the uncontested king of rehashes. In the 90s, Capcom managed to produce a seemingly endless string of re-releases with Street Fighter II. Yet, Arc System Works has stolen that title from Capcom, or at least forced them to share it, because Arcs Guilty Gear series has reached a similarly ridiculous number of updates. Guilty Gear XX Accent Core marks the fourth upgrade of Guilty Gear XX, which itself is an update (albeit a dramatic one) of the Guilty Gear X games. Despite the obvious greed surrounding Accent Cores release, its still a phenomenal fighting game that adds quite a bit of depth and new content to the GGXX series.

One thing needs to be made clear: if you have never played a fighting game before or if your fighting game résumé consists entirely of Mortal Kombat, Guilty Gear will be a difficult transition. If you are a fan of fighters, then you may immediately find this to be one of the best youve ever played. The gameplay is extremely fast and battles often take to the air courtesy of the air-dashing and mid-air combos that the game puts a huge emphasis on. GG isnt based entirely on twitch reactions, though, since that would leave it a very hollow, uninteresting game. The series is special because of the sheer quantity of depth it hides under its flashy surface. In addition to the characters standard moves, there are countless advanced techniques like Faultless Defense, an invaluable blocking maneuver; and Roman Cancels, which allow you to craft your own obscenely damaging combos. While those elements have been present in every version of GGXX, Accent Core adds even more depth by incorporating Force Breaks and Slash Backs, which aid your offense and defense, respectively. Theres a wealth of combative possibilities at your fingertips, and theres little that can rival this game when it comes to complexity. 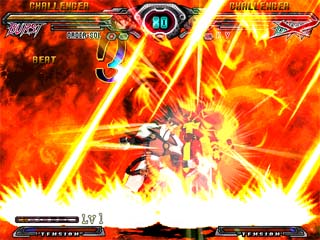 Yes, this game is chaotic.

Many of the people who will play Accent Core will never even scratch the surface of what this game has to offer. Yet, even casual fighting game fans will easily be able to enjoy the game. In the absence of high-level tactics, Guilty Gear is still enthralling thanks to its remarkably fresh cast of characters. While the game has basic Ryu and Ken equivalents in the form of Sol Badguy (yes, Badguy) and Ky Kiske, theres also some truly bizarre character designs, like the scalpel-wielding Faust and the indescribably strange Zappa. Whats more, all of the characters have a unique feel to them, and you never get the impression that some characters are mere palette swaps of others. Accent Core marks the first US GGXX appearance for Order Sol and A.B.A., both of whom are strong additions to the already well fleshed-out roster of 23 characters. Simply experimenting with different characters is fun since everyone is so different, and even without digging into the more advanced techniques in the game, each character has countless strategies you can utilize. Guilty Gears fast pace may serve as an entry barrier, but once you get past that, youll find that the game plays like a dream whether youre a casual player or a hardcore fanatic.

Accent Core takes a small step back from previous incarnations of GGXX with its selection of modes, however. While previous installments offered a story mode and a mission mode that tasked you with completing inane objectives, Accent Core strips those options away. Admittedly, thats a minor loss considering how uninteresting and poorly put together those modes were, but its worth noting for fans expecting the original GGXXs narrative to make a return. What Accent Core does have is the standard Arcade mode, Vs. mode, Training mode, the Medal of Millionaire mode where you scramble to collect medals you beat out of your opponents, and a surprisingly enjoyable Survival mode. Accent Core also introduces a number of new moves for characters, as well as character balance tweaks designed to appease hardcore fans of the series. This is arguably the most balanced and refined iteration of GGXX yet. Theres no shortage of content to unlock, either, as the developers included EX variations of every single character that can be earned in survival mode, entirely new characters, new stages, and new modes. The game offers a generous amount of material, so even solo fighters who dont have anybody to play with will have quite a bit to tackle.

As entertaining as the gameplay is, though, the first thing youre likely to notice about Guilty Gear XX is how astoundingly good the graphics are. GG uses high-resolution sprites, so all of the characters and backgrounds are amazingly sharp and crisp, especially if youre used to the rough look of the 2D games that Capcom and SNK are releasing. What makes the graphics especially impressive is the ungodly amount of onscreen effects  from the glowing trails of characters weapons to the seizure-inducing flashes of special attacks, nothing in this game is without its stylish touches. Accent Core is undoubtedly one of the most graphically impressive 2D games to date, and its a sight to behold in a heated battle. 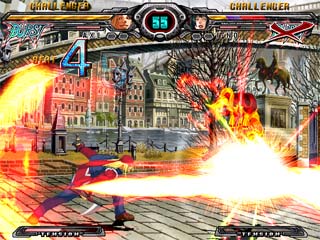 Guilty Gear really is a spectacle.


The audio side of Guilty Gear is equally as impressive, provided that youre a fan of metal music. If you are, The soundtrack is phenomenal. It succeeds in making fights feel intense and its so enjoyable that youll feel that cranking the volume up is mandatory. The voice-overs for the characters consist almost exclusively of Engrish that makes little to no sense, but its charming in its own way and delivered with passion. The one mishap in the audio is the announcer voice thats new to AC. It sounds strange and over-excited, but this very minor nitpick is the worst thing that can be said about the otherwise stellar aural presentation. This game is truly a technical marvel.

Guilty Gear XX Accent Core is one of the finest fighting games ever to grace the Playstation 2. Its lightning-fast, has an unbelievable amount of depth, and feels polished to perfection. If youve bought previous iterations of GGXX and enjoyed them, its worth considering an upgrade to Accent Core, especially with its semi-budget MSRP of $29.99. If youre a fan of fighting games and youre new to the series, then you are practically obligated to own this masterpiece.

If you enjoyed this Guilty Gear XX: Accent Core review, you're encouraged to discuss it with the author and with other members of the site's community. If you don't already have an HonestGamers account, you can sign up for one in a snap. Thank you for reading!

© 1998-2021 HonestGamers
None of the material contained within this site may be reproduced in any conceivable fashion without permission from the author(s) of said material. This site is not sponsored or endorsed by Nintendo, Sega, Sony, Microsoft, or any other such party. Guilty Gear XX: Accent Core is a registered trademark of its copyright holder. This site makes no claim to Guilty Gear XX: Accent Core, its characters, screenshots, artwork, music, or any intellectual property contained within. Opinions expressed on this site do not necessarily represent the opinion of site staff or sponsors. Staff and freelance reviews are typically written based on time spent with a retail review copy or review key for the game that is provided by its publisher.