Killer7 squandered more potential than most any other game this decade. On top of making me wonder if Capcom was an LSD production front, its hyper-stylized and totally off-the-wall trailers made it seem downright unbelievable. A hero that can burst into a cloud of blood and reforming as any one of his seven split personalities at will; a crippled old sniper with a maid who slaps the shit out of him when she isn't pushing his wheelchair around; and a TV news dude with an afro and a yellow t-shirt who feigns masturbation while a stadium blows up on camera behind him! What could go wrong?

The game proper being not a bit as interesting would be a good place to start. Look at those pictures. Look at them. I know you're not looking, so here: 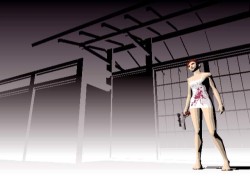 What few real cutscenes there are turn out just as stylish and odd as screenshots like that imply. Midway through the game we see the young businessman Matsuoka arguing with a pair of older associates, one of whom slides a revolver to him in the heat of the moment and jokes that he'd be better off if he blew his own head off. Further taunting that he wouldn't have the balls to take the revolver and cap the two of them backfire: he snaps and blows their heads clean off, disgusting chunks of brain matter hanging out of their shattered skulls where they used to have faces.

As if it were still just a verbal spar, one of them asks why he treats his elders like such a nuisance. Matsuoka's day is about to take a turn for the surreal. Too bad scenes like this are the exception, not the rule. Much of the game's labyrinthe story is told in cryptic chunks by a ghost named Travis... who always wears muscle shirts with slogans like PILLOW TALK and POWER LUNCH on them. Not so bad, but the insult and the injury come together in Capcom's decision to not bother with proper voice acting for this fellow. Travis spends hours of the game talking to you about everything from politics to philosophy. Instead of making all these scenes dynamic or bothering to make the guy actually speak, Capcom decided that we should just read subtitles while our man makes random noises like in an old-school Super Nintendo RPG.

Well, no. You could scroll through SNES RPG text quickly if you pressed a button, whereas somebody over at Capcom decided it'd be a good idea to make it so that you can't speed things up without skipping the entire one-sided conversation. Everyone more than six years old will have finished reading the short lines of subtitled text well before Travis is done 'speaking', and it's fucking infuriating.

There's some variety. Next time it might be a sadistic girl's foul-mouthed severed head in a washing machine doing the 'talking', and the fifty-step tutorial is done by a gimp-suited red fellow who wastes time at the beginning of every single step saying "Master, we're in a very tight spot". What avant-garde storytelling; what modern art! What a load of crap.

But hey, it's still a Capcom game from the same team that made both Resident Evil 4 and the original Devil May Cry... suffer through the presentation problems and it should be pretty good, right? Not quite. Somebody just didn't have their priorities in order, and the game itself comes across as little more than an afterthought to the story.

To the story that is told by ghosts making random noises.

It's not that I mind simple gameplay. Doom II is my favorite game ever and it's thirty levels of hectic point-and-shoot; I love that Killer7 doesn't even give you the option to explore beyond moving forwards and backwards along an occasionally forking path. It's that the game itself is less "simple" and more "insulting". Inside an otherwise empty room lies a candelabra with its five holders numbered 2 4 1 3 5. Bet you can't guess which order to light them in! Make it past that and you'll eventually come across a seemingly impassable locked door. Thief personality Coyote Smith is a lock picker. What a great effort to make sure that the whole split personality gimmick is worthwhile.

And even if your mind settles into Killer7's creative rut, the vicious loading times will snap it right back out in a second. Five to ten seconds of blue static every single door you open, and even the menu screens don't come up right away. The PS2 version is supposedly even worse; but hey, at least I got over my obsessive habit of going into save rooms too much.

Combat works just as poorly, again thanks to the design rather than the mechanics. You can go into first-person mode at any time and blast away, RE4 style. This works. But what doesn't is that literally every generic zombie-like enemy is killed in two steps:

I know we reviewers tend to exaggerate, but the worst that Killer7 will throw your way are enemies whose yellow spots are on their backs. There is literally no danger, as nothing comes in numbers and the attack that all of them have is exploding after getting close to you. Even if you're not good enough to pull off a trick shot before they run up and hug you, three or four shots anywhere else will work just as well. Nothing will get close to you.

Not even the bosses. Mask de Smith, the cape-adorned wrestler personality with twin grenade launchers and a knack for headbutting bullets, at one point comes face to face with an assassin who goes on and on about how he and all the other children used to adore watching Mask in the ring every weekend. I'll cut the sarcasm for once, all you have to do is

before it drops on him and kills him. When every part of the gameplay is so obviously an afterthought you begin to wonder if somebody picked the wrong medium and if Killer7 should have been a film instead... wait, moviegoers don't want to hear ghosts in muscle shirts mumble for hours on end either.

The auteur posturing of its producer Suda51 aside, Killer7 is dull. I'm sure the story's endgame is as great as everybody says--I've tried to play through this three seperate times and never made it further than halfway--and the colorfully surreal cel-shaded graphics are nice, but when it comes to actually playing the game all the maniacal laughter and cartoonish bloodsprays in the world won't change the fact that you're shooting yellow spots and lighting candles. When you're not sitting at loading screens or listening to ghosts mumble, that is. Even a stoner couldn't sit through this... maybe it's modern art after all.

If you enjoyed this Killer 7 review, you're encouraged to discuss it with the author and with other members of the site's community. If you don't already have an HonestGamers account, you can sign up for one in a snap. Thank you for reading!

© 1998-2021 HonestGamers
None of the material contained within this site may be reproduced in any conceivable fashion without permission from the author(s) of said material. This site is not sponsored or endorsed by Nintendo, Sega, Sony, Microsoft, or any other such party. Killer 7 is a registered trademark of its copyright holder. This site makes no claim to Killer 7, its characters, screenshots, artwork, music, or any intellectual property contained within. Opinions expressed on this site do not necessarily represent the opinion of site staff or sponsors. Staff and freelance reviews are typically written based on time spent with a retail review copy or review key for the game that is provided by its publisher.