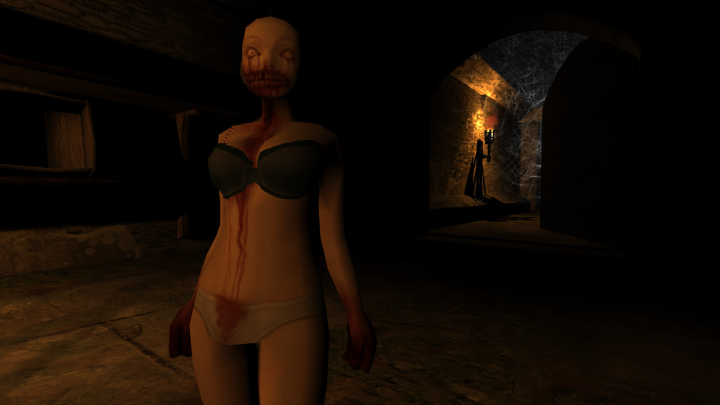 What is gynophobia? It is a fear of women. It is different than misogyny, which is hatred of or contempt for women. Misogyny is not a phobia. The protagonist of Gynophobia is a man named Mark who fears women and that is what this short story is about. It is a strange game and an old school FPS. The gynophobia theme in this game shows some originality, but there is very little substance to the story. The protagonist also has arachnophobia, a disorder shown in the thin plot of this FPS.

Gynophobia, the game, goes through five stages while the man is trying to overcome his disorder. The game begins in his house, where he sees a pair of womens panties on the bed and a bra on the floor near a closet. In a different room he sees a PC with a sign that says something like Press Enter to Play. Upon pressing Enter you go into a sewer and it is up to you to escape from the sewer alive. This is purely FPS gameplay with no reference to gynophobia. It feels like shooting at enemies just for the sake of shooting to survive. Then it is on to the streets, where there are more enemies, including a gigantic man wielding a gigantic spiked club, who are constantly stalking you while you find tires, a toolbox, and fuel to make a truck functional and to drive out of the dangerous streets. After that escape, your mom drugs you with a concoction that puts you to sleep. In your sleep you will have to go through the remaining stages that play out in your dream where every enemy is either a woman or a spider.

The enemies after stage 2 look unsettling and scary. There are some puzzles to solve that open doors so that you can advance. One unique puzzle includes shooting a large spider attached to the ceiling so that it can fall to its death on top of spikes in front of you. Jumping on the dead spider is the only way to cross over the erected spikes and reach the next platform. The game is not easy, as it is very easy to get killed. There is no save point until the stage is fully completed. There are some health items scattered around each stage, but you must be very careful because only a few hits can kill you and you will have to start from the beginning of the stage. In addition, your health carries over to the next stage, no matter how low it is. The final stage involves a fight with the spider queen, probably the only enemy who does not look unsettling. 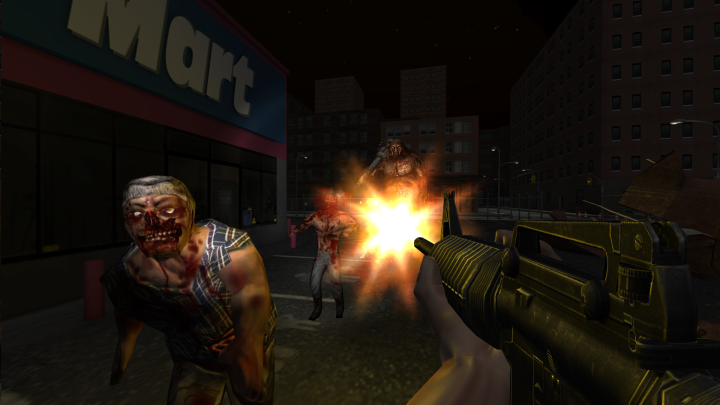 The graphics run on the Unity engine and are not too bad. I didnt encounter any game breaking glitches, but the game overall is enjoyable for too short a time. I can appreciate the originality of playing a gynophobe, but it is not enough when the game is so short on gameplay and so short on plot. It took me only 2 hours to complete this game.

I find it hard to recommend Gynophobia to anyone looking for old school FPS action and some substance to a storyline, especially a storyline with a sense of clear direction. The one benefit you can get out of this game are the Steam trading cards if you want to level up your Steam or create a new badge. Putting together a few challenging FPS levels with an ambiguous plot does not result in a game that can grow on you as you play.

If you enjoyed this Gynophobia review, you're encouraged to discuss it with the author and with other members of the site's community. If you don't already have an HonestGamers account, you can sign up for one in a snap. Thank you for reading!

© 1998-2021 HonestGamers
None of the material contained within this site may be reproduced in any conceivable fashion without permission from the author(s) of said material. This site is not sponsored or endorsed by Nintendo, Sega, Sony, Microsoft, or any other such party. Gynophobia is a registered trademark of its copyright holder. This site makes no claim to Gynophobia, its characters, screenshots, artwork, music, or any intellectual property contained within. Opinions expressed on this site do not necessarily represent the opinion of site staff or sponsors. Staff and freelance reviews are typically written based on time spent with a retail review copy or review key for the game that is provided by its publisher.