In a time where stealth gameplay is an option in the plethora of choose-your-way open world games, pure stealth games as well as military espionage titles are something of a dying breed. Splinter Cell as a brand is a series that has surprisingly stayed afloat, original and in high regard despite its waning time in popularity. This exceptional quality is made even more impressive by how these titles remain highly replayable decades after release, and yet very few companies, including Ubisoft, take notes as to why the original Splinter Cell remains an instant classic worth playing today. Like the grizzled Sam Fisher we know and love, there are some games that age like wine not only because they remain a technical marvel but because they had a firm foundation of an idea.

As if the game itself was developed by the heads of Third Echelon, the lighting mechanics are so well refined for the time they do not operate on modern computers without an unofficial Shadow Buffer fix. (In addition, this mod also provides the PS3 remastered textures and a widescreen fix, and you can also download Pandora Tomorrow with the same fixes on PC.) This issue thanks to your modern graphics card wont show up until several missions when spotlights and guards wearing headlights are introduced without proper cones of vision. The reason this fixable problem deserves mentioning is it displays how integral shadows are in Sams arsenal, and when they are taken away it exposes how frail Sam is as a character as well as the games weaker points.

Shadows and lighting are not exactly what hinders the gameplay as its more often the sound detection that remains questionable. While the mouse-wheel controls for speed are unique, the lack of clarity when crawling behind a guard makes its inclusion more of a problem. Surfaces can be harder to determine in the dark or with night vision, and until you know the limits of guard behaviors with respect to these surfaces you will mash the quickload option many times if you strive for perfection. This factor alone makes it difficult to determine if the AI is too stupid or too farsighted, or if they have supernatural vision and hearing. This aspect of the gameplay is a real bittersweet taste to an otherwise highly refined game as the lighting effects and their gameplay effects are used to an exceptionally well degree with guard lights, spotlights, landmines and bombs for thermal vision as well as non-human enemies such as cameras and dogs. Games simply dont consider how immersive these aspects make a game, especially when it comes down to the stealth mechanics. 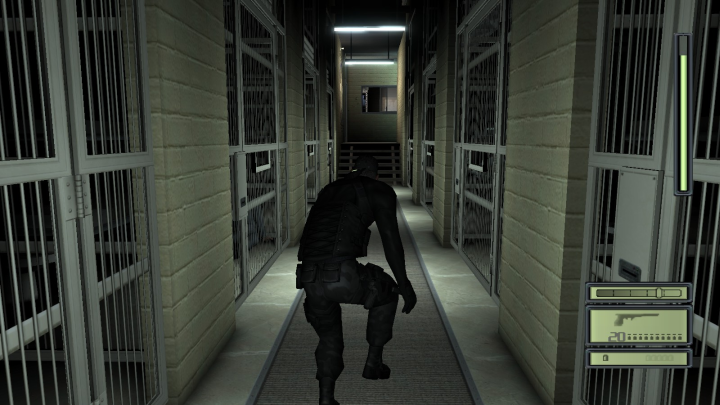 Apart from a few missions where youre not allowed to kill anyone or to be spotted, these issues rarely crop up enough to ruin the game. If you accept sometimes you--or the game engine--will make mistakes, then you will become part of the real narrative behind the game. Learning from your errors and becoming a perfectionist is truly what Splinter Cell tells as a story rather than the clichéd Tom Clancy Red Scare/World War 3 plot made interesting solely by Michael Ironside behind Sam Fisher.

Although Tom Clancy narratives are known solely by their fears of impending world wars and character descriptions consisting of page-long descriptions of acronyms and details about guns, these storylines are well suited for video-games. These stories establish clear motives and enemies, and they are hyperbolic enough to not portray superpower countries as pure evil--the conflicts always stem from revolutionaries or radical individuals seeking more power. Splinter Cells narrative does not deviate as it follows the assassination of the President of Georgia (not the state) as well as the billionaire Nikoladzes plan to seize control by using a well-placed nuclear bomb. Admittedly, the way the story is told through cutscenes, emails, TV show snippets and guard dialogue makes this plot far grander to uncover than it sounds, but the real reason why the story is so effective is the role Sam Fisher serves in the story.

Sam Fisher, while not exactly the most unique character of all media, is perhaps the most unique video-game character. Whereas Link and other silent protagonists are meant to be vessels for the player through their lack of character or voice, Sam Fisher is a rare case where its the situation of circumstance that makes the player easily embody him. As a newly recruited member of Third Echelon, Fisher is an operative coming back into the espionage work after some time and all he knows about the program is his former friendship with Lambert. His knowledge about the missions, the severity of its consequences should he fail, and even how much he knows about Lambert are all classified until it is on a need to know basis for his success. This opposition with withholding the narrative is something the player and Fisher experience together, and its Fishers reserved professionalism that keeps players from feeling aimless or ignored--he is the embodiment of a video-game conscience made into a voiced protagonist. In addition, this aspect of Fisher and the natural progression of players become more adept and professional makes the unison of the character and the player become seamless as you play. 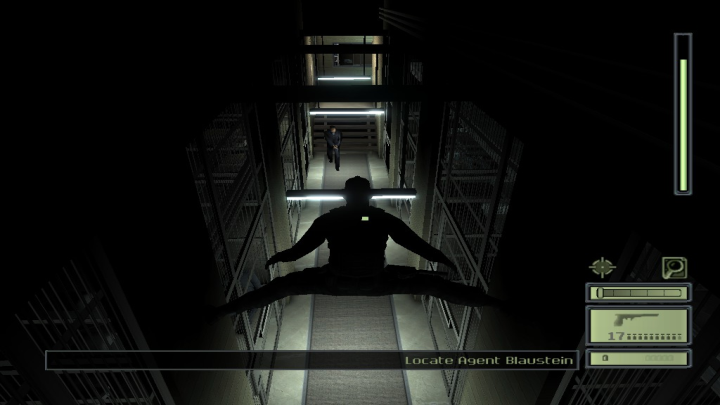 This perspective comes out naturally solely because of what type of game Splinter Cell is, and that is a series of missions in a stealth sandbox. Players are given tools with all levels of skill to use from using guns as a lethal method to remove threats to using guns as a distraction or a means to shoot out lights to sneak past. This duality of nonlethal and lethal methods is not limited to guns as sticky cameras, air rounds, shock rounds, bottles, and even acrobatic moves as the iconic--not Ubisoft iconic--double-split maneuver are all tools granted to the player to use as they seem fit. Although there are settings for Normal and Hard difficulties, its the tools themselves that allow players to make the game as easy or as difficult as they want while balancing the challenge necessary to pull it off. This natural skill progression will lead to meta-game challenges as using no weapons, no tools, and pure sleuth maneuvers as players slowly become the legend that is Sam Fisher.

As hard as it is to believe, it took me fifteen years to finally get around to playing the original Splinter Cell, and it amazes me how the classic game holds up today as I have far more experience with future iterations, Double Agent and Conviction (as well as the novelizations of the first two games). It seems oddly fitting it has taken me over a decade to finally return to where it all once began and finish what my childhood started. That facet of my experience with the original should prove how strong of a foundation it established and how ripe for future sequels to improve on its gameplay and its storytelling. Both of these aspects have mostly become true as Splinter Cell is perhaps one of the most well-handled series of games, but sometimes you want to start over where it began, flip the tape, and listen,

Heres to you, Sam Fisher and Bert / Rest forever here in our hearts / The last and final moment is yours / That pedigree is your triumph.
4.5/5

If you enjoyed this Tom Clancy's Splinter Cell review, you're encouraged to discuss it with the author and with other members of the site's community. If you don't already have an HonestGamers account, you can sign up for one in a snap. Thank you for reading!

© 1998-2020 HonestGamers
None of the material contained within this site may be reproduced in any conceivable fashion without permission from the author(s) of said material. This site is not sponsored or endorsed by Nintendo, Sega, Sony, Microsoft, or any other such party. Tom Clancy's Splinter Cell is a registered trademark of its copyright holder. This site makes no claim to Tom Clancy's Splinter Cell, its characters, screenshots, artwork, music, or any intellectual property contained within. Opinions expressed on this site do not necessarily represent the opinion of site staff or sponsors. Staff and freelance reviews are typically written based on time spent with a retail review copy or review key for the game that is provided by its publisher.