Note: This mostly spoiler-free review is best appreciated by those who have played its subject game, as this is chiefly an examination of narrative elements.

Of all the works by eccentric auteur Hideo Kojima, none have been as bizarre and polarizing as Metal Gear Solid 2 the follow-up to his first big hit. It's a truly postmodern work, functioning as a criticism of societal standards and expectations relating to storytelling and art. The sheer audacity and insanity of the game were unprecedented in the medium, and the result, however absurd and amateurish it can be, is strangely spellbinding.

To come to grips with Metal Gear Solid 2, one must first understand context surrounding its creation. After the financial success and largely positive reception of the unseen yet ambitious Metal Gear Solid, Kojima already had plans to part ways with the series; he ended up staying (and also making similar unfulfilled claims of departure) for several more titles in the series, but what matters is that by now he had begun to attain awareness of his public image. With Sony producing trailers and people buying Kojima project Zone of the Enders chiefly to try out a short demo of the upcoming MGS sequel, what did Kojima decide to do with this albatross of a future project? Why, he made it a meta-contextual criticism of his fans' expectations! Naturally. 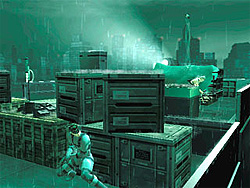 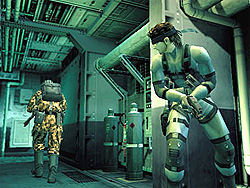 The setup, deployed chiefly during a mission on a tanker that served as the setting for all advertisement of the game, was deception that has now entered legend: an entrancing opening cutscene, an intro level with a layout more nuanced than anything in MGS1, tons of fanserice screentime from favorite characters Solid Snake and Otacon, and a boatload (heh) of improved mechanics, including non-lethal weaponry, first-person aiming, and enemy AI only slightly less incompetent and myopic as a Stormtrooper. Granted, the controls were ineffectual and the camera unhelpful, especially considering how the roughly contemporary (and certainly superior) Splinter Cell would run circles around MGS2's clumsiness, but this was still a strong start. An introduction bearing minimal resemblance to the entire rest of the game.

You know what happens: a crisis occurs, Snake goes missing, and the player assumes control of the unknown newcomer Raiden, a character shown in no advertising, a complete surprise to gamers back in 2001. Raiden isn't necessarily a nuisance in his own right, yet his fair complexion and confused inexperience weren't to sate those wanting to assume the role of everyone's favorite grizzled Legendary Soldier. It's tough filling Solid Snake's footsteps, but you'll have to do so in rather literal fashion: your introduction into MGS2 proper is littered with recycled elements from the first game: go underwater to infiltrate a terrorist-captured government facility; wait for an elevator to take you up into the facility, take off a mask to effect a dramatic reveal, listen to Colonel Campbell give you unnecessary tutorials by saying exact lines from MGS1, word-for-word. If the prologue as Snake on the tanker was MGS2 as the fans dreamed it would be, the first moments of Raiden entering the Big Shell facility are MGS2 revealing itself from behind a facade of disingenuous presentation. 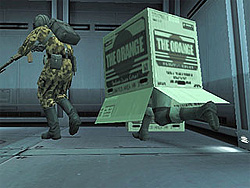 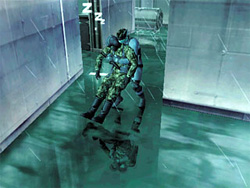 This is no mere accident of design, because Metal Gear Solid 2 is Kojima at his most unhinged and personal. This is him showing how easily he can deceive the player, because the message here is a nuanced one requiring a direct approach to its audience. Reality has no certainty here, seen by the huge bait-and-switch with protagonists but also in smaller, equally intriguing fashions. Raiden -- and, by proxy, the player -- is an extremely unreliable perspective, being strung along by whatever weirdness Kojima pulls out of thin air, from flamenco-dancing vampire assassins to obese roller-skating demolitionists. The sheer nonsense of various plot elements and their tendencies to turn out to be of a totally different nature than initially perceived results in a surreal effect akin to being in a bad dream that one cannot awaken from; hence such clunky lines as Raiden saying "It's all like some bad dream that I can't wake up from!" And, indeed, the plot begins to completely abandon logic by the final chapter, with Raiden being revealed as having a surprisingly horrific backstory of hyper-realistic VR training eerily akin to what the player glibly accepts as entertainment, the game beginning to actively resist player input, all pretenses of stealth gameplay being dropped, a familiar face showing up to literally use an infinite ammo cheat, impossible feats of luck, a swordfight against a (fictional) former president, and a straight-faced tone throughout. 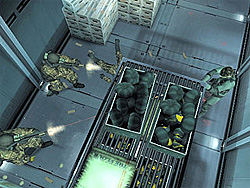 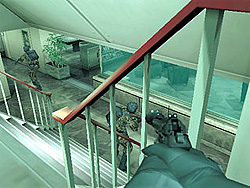 If this sort of insanity -- the kind that can actually confuse and disturb, not novelty shock value -- doesn't lead one to run away screaming, there's some fascinating thematic material to unpack. Of course, the greatest obstacle to doing so isn't even from the nuttiness on display; it's from the amateurish aspects of the writing. Metal Gear Solid 2's extremely skilled translator was infamous for going on the record as dubbing Kojima an incompetent writer whose material was "nothing above a fanfic level," and those accursed Codec radio calls make a great case in her favor. In fact, most of the clumsy, unnatural dialogue does, but it especially taxing to listen to ten-minute sessions of Raiden and his girlfriend Rose interrupting a mission of national urgency (and also the player's one-minute increments of actual gameplay) to reminisce about their first date or whatever. It's a shame that there's as much unnecessary melodrama as there is legitimately interesting conversation topics; one can but suppose this obstructive writing was intended to annoy and unnerve the player as aforementioned writing elements certainly were. Or maybe Kojima should have spent that time he put into adding lewd Easter Eggs into the game towards learning basic screenplay skills. Either way, the storytelling can dip into being a waste of a display that could have been performed much better by countless other, better writers, but what about the actual themes at play? 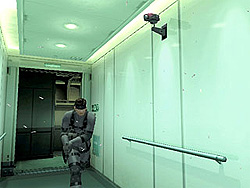 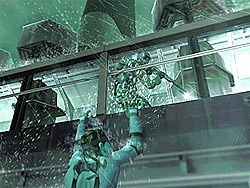 It's in the thematic material that Kojima is most adept, and what's there to dig into here proves behemoth. Through twists and subversion of expectation, one is forced to confront the power of media to deceive. The very nature of human experience itself is called into question; can the human brain even perceive reality in a meaningfully accurate manner? The whole cast gets tripped up at some point or another, grasping at total ignorance, outright falsehoods, or, worst of all, warped half-truths. In regards to the plot at hand and the worldbuilding as a whole, everyone in the Metal Gear world contributes to a flood of vapid, context-deprived information (i.e.: the Internet) so dangerous to the safety and sanity of mankind that the central antagonistic force of the series aims to control communications, the very course of culture, in order to clutch some sense of order. Propelled by circumstances out of his control, Raiden thwarts the potentially essential effort in the name of individual agency and freedom, casting off the shackles of player control, as well. The game's final speech advises us to discern and discriminate what information we consume, reminds us that absolute knowledge and awareness of truth and context is impossible for mortal man, and assures us that, as confused and uncertain we may be, we should strive to make sense of what we can learn.

Sage words close out this utterly fascinating chapter of one of the most thematically rich series of video games. Quirks deliberate and unintentional alike result in one of the most inaccessible works in all of pop culture, but breaching the leviathan proves worthwhile. It's unfortunate that the messages of Metal Gear Solid 2 are given such obtuse and occasionally inept venues of conveyance, yet it wouldn't be quite as unique without that lack of polish. Metal Gear Solid 2 is an artist's statement, a grave warning, a kaleidoscope of madness, and in its own right a fine-enough stealth title, but above all else it is an inimitable phenomenon that can never be replicated in any other medium, nor repeated in its own. And that alone is enough to make it worth remembering.
4/5

If you enjoyed this Metal Gear Solid 2: Sons of Liberty review, you're encouraged to discuss it with the author and with other members of the site's community. If you don't already have an HonestGamers account, you can sign up for one in a snap. Thank you for reading!

© 1998-2020 HonestGamers
None of the material contained within this site may be reproduced in any conceivable fashion without permission from the author(s) of said material. This site is not sponsored or endorsed by Nintendo, Sega, Sony, Microsoft, or any other such party. Metal Gear Solid 2: Sons of Liberty is a registered trademark of its copyright holder. This site makes no claim to Metal Gear Solid 2: Sons of Liberty, its characters, screenshots, artwork, music, or any intellectual property contained within. Opinions expressed on this site do not necessarily represent the opinion of site staff or sponsors. Staff and freelance reviews are typically written based on time spent with a retail review copy or review key for the game that is provided by its publisher.