Those three minutes was reasonably talked-about. A slow-motion trailer in reverse order, showing a family at a hotel on vacation in paradise that is being torn apart by relentless zombies. Not only was the presentation beautifully elegant and sophisticatedly unobtrusive in both frame and sound, but the emotional impact was just as downright stirring. The trailer indicated a promising, gorgeous looking game that combined gory zombie action and emotional commitment to characters and story. Unfortunately, Techlands sandbox action role-playing game couldnt actually care less about characters and story.

Rather promptly it becomes clear what the game is lacking and most likely will not pay any attention to, namely dialogue, characters and voice-over. Dialogue is flat and incredibly inferior, expressing silliness and stupidity, while wooden animated characters are exclusively one-dimensional and apathetic. Moreover the voice-over component is frequently slack and awkwardly melodramatic, shattering the outcome of any drama occurring, though the occasional scattered tape recordings convey quite the opposite. The simple-minded story basically revolves around you carrying out main and optional side quests provided by a selection of survivors whose common goal is to ultimately escape the infected island. The problem with these quests is its easy to detect a repeating pattern that often turns out to be dull and monotonous rather than exciting and involving. The devoid of tension and fateful atmosphere is remarkable during and between the quests that often feel like a one continuous transportation which frankly takes up most of the time, but supposedly that comes with the open world territory. 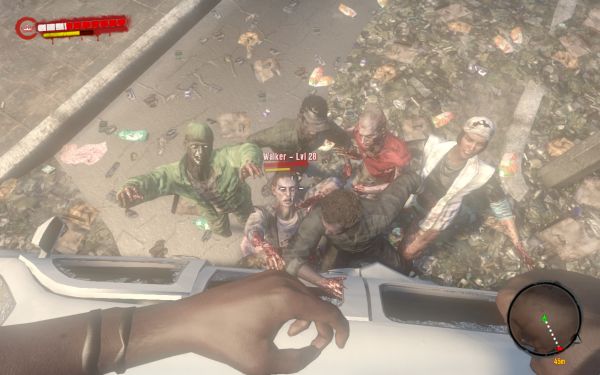 The expansive setting of an open world coupled with the visuals, however, is mostly a delightful experience. Unlike the repeating gameplay, the dull quests and the stiffly animated characters, the fictional island of Banoi is anything but. The overall settings feel lifelike and appear varied; the environments of the resort, city and jungle come out as believable and are surprisingly detailed and intriguing enough to explore. Thankfully, vehicles (that can be tough to drive and tends to get stuck) are occasionally accessible which obviously make transportation easier as well as carrying out road kills.

Guilty pleasure gradually becomes fun and play a significant role here, though. Unrestrained portions of gruesome blood and gore as well as satisfying versatility towards melee combat against dynamic injuries are the orientated elements that appear to have received the foremost care. Slicing off a zombies limbs, witnessing splashes of blood using an impressively widespread arsenal that shortly break yet can be repaired and also creatively upgraded is morbidly awesome, but guns arrive way too late and the ability of blocking and dodging is not implemented and therefore - given the fairly sluggish controls that tend to induces joy kills - somewhat annoying when encountering hordes of zombies and special infected. 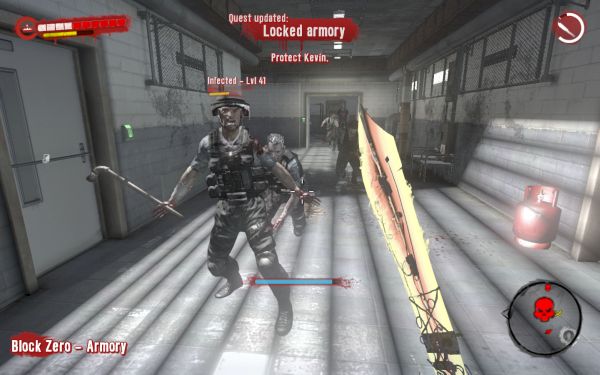 Fighting technique is rather easy, energy drinks and bars representing health are scattered pretty much everywhere and looting bodies and all sorts of objects like abandoned suitcases and handbags in order to buy, repair and upgrade your inventory seem endless. Fortunately, the level of difficulty actually increases during the second map, improving the overall purpose of the survival aspect by intensifying enemies; consequently adding fragments of tension. The element of role-playing manifests itself by levelling via talent trees that customise the chosen character. The chance of levelling up is barely a challenge since experience point scores pop out of killing enemies, checkpoints are frequent and respawn factor is quite generous. In addition, killing zombies with friends in a solid online system is a favourable opportunity that actually deserves a bunch of applauds. Oddly enough, if playing alone the other three characters still appear in cut scenes (!), though viewing is optional.

Bringing obvious inspiration from a number of characteristic games, including Left 4 Dead, Dead Rising, Far Cry (not ruling out the sequels) and Fallout: New Vegas, Dead Island hardly achieves equivalent quality. Certainly there is plenty of joyful slaughtering that encourages plentiful approaches on a cool tropical island that has lots of ground to cover, but the non-existent originality, the repetitive quests and lack of weight have a permeating impact on the overall experience which cannot possibly be overlooked. If neither story nor characters are good enough, suspense and atmosphere can actually redeem these shortcomings; however, the redeeming qualities are barely there. When all is said and done, looking back at its easily 20-25 hours of mindless yet pretty amusing content, the game is actually incapable of bringing a single good component, because all it succeeds in managing is a tolerable standard and a tolerable standard alone. Besides, that beautifully emotive trailer keeps teasing in the background, reminding what is left out.

If you enjoyed this Dead Island review, you're encouraged to discuss it with the author and with other members of the site's community. If you don't already have an HonestGamers account, you can sign up for one in a snap. Thank you for reading!

© 1998-2022 HonestGamers
None of the material contained within this site may be reproduced in any conceivable fashion without permission from the author(s) of said material. This site is not sponsored or endorsed by Nintendo, Sega, Sony, Microsoft, or any other such party. Dead Island is a registered trademark of its copyright holder. This site makes no claim to Dead Island, its characters, screenshots, artwork, music, or any intellectual property contained within. Opinions expressed on this site do not necessarily represent the opinion of site staff or sponsors. Staff and freelance reviews are typically written based on time spent with a retail review copy or review key for the game that is provided by its publisher.