A visible effort into making a stand-out first person shooter-stealth horror game. Personally, I liked this game quite a bit. I'm fond of the design and setting and the gameplay wasn't bad, but there is plenty of room for improvement.

The first thing a player will notice is the color scheme, black and white with red filters to create a unique visual setting which perfectly complements the lonely and abandoned theme of the game. It creates an unsettling environment and is capable of leaving a memorable impact on a player. But I found that while it does look neat, the style lacks substance and eventually becomes a chore to look at for prolonged periods. Thankfully you have the option to adjust color and saturation on the main menu, so therefore only half of the game gets tiresome to look at.

Betrayer's gameplay can be considered as a FPS with stealth and horror implements. The player has an open world dotted with enemies to be looking out for, and three weapon slots to fill with your choice of weapons. While the gameplay wasn't atrociously bad, there are some loose screws that break a chunk of the experience off. The game takes place in the 1700's in the new world (AKA modern day America if you don't know history) and takes advantage of the technology of the time period: Bows and powder loaded single shot firearms comprise your selectable armory. One of the problems I have with Betrayer is the weapons itself, being a first person shooter weapons are a very important part of the gameplay, and the weapons available are of short variety and are slow and meticulous to use. To fill your three weapon slots is a selection of 5 weapons, 3 kinds of bows and 2 firearms. The bows are unreliable in combat because a heavy chunk of enemy distribution are covered in a kind of armor that has a chance to harmlessly deflect your arrows, and the guns, realistically but kind of frustratingly, take a long time to reload. This makes the combat either frustrating or uninteresting depending on the player's approach. 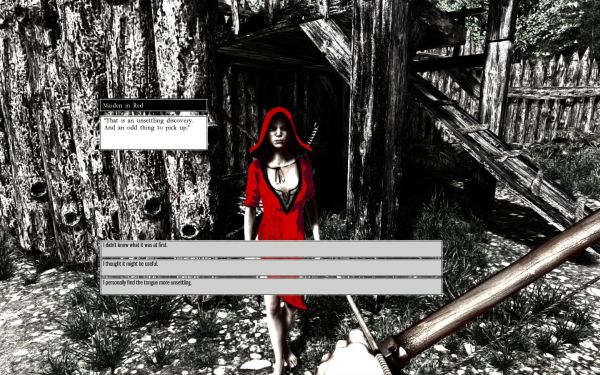 Stealth mechanics are also implemented, enemies start off unaware of you but can detect you if they see or hear you coming. To counteract this, you can stay crouched and in shaded, obsure areas and move when the wind blows to block out the sounds of your footsteps. Stealth is even encouraged in the prologue level as it explains that enemies become enraged when in combat making them stronger, and that attacks while undetected deal more damage. A problem with this is that the stealth mechanics aren't as polished as they should be in order to suggest such an approach for the whole game. Enemies will always know exactly where you are if you mess up, and you cannot escape and try again, making a stealthy capture of a fort or outpost a "do it right the first time or not at all" deal. Also, I find that using arrows is more difficult with the black and white color scheme since its harder to determine where your arrows are flying, so it takes longer to determine the arc and most often giving yourself away.

For the horror aspect of Betrayer's design: I think it's subjective. I didn't find anything scary but that doesn't mean others will too. I liked some of the enemy designs, the maddened beasts wearing Spanish inquisitor armor and the burned men (who are IMPOSSIBLE to see with black and white settings) are some of the most unique and creative designs I've ever seen. But at the same time the enemies are also so uncreative and boring. Other types of enemies include giant spiders and skeletons, might as well go all the way and throw in Frankenstein's monster and Dracula to get the real Disney's Haunted Mansion effect.

I was really disappointed at this turn, since the other types of enemies are creative and fit perfectly with the game's setting only to erase them out entirely halfway through the game and rely on cliche monsters you'd find in a kids Halloween drawing. On a side note here, one of the most memorable and fun parts of the game is where you come across a large fort that you'd expect to be infested with enemies, only to find it empty. You feel slight relief at the unexpected respite when you hear battle horns in the distance and then find yourself under siege from the Spanish inquisitors. This part was so unexpected and fun, I really wished that more of Betrayer had moments like this. Nobody suspects the Spanish Inquisition! 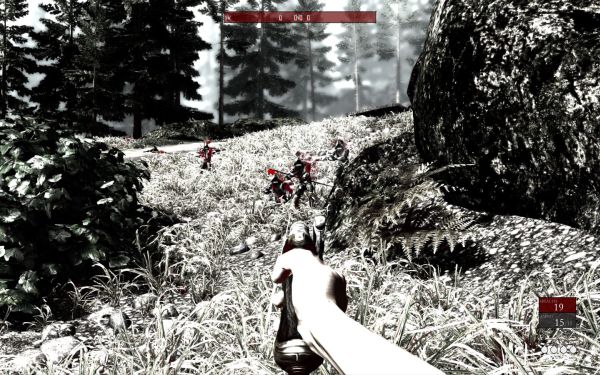 Now to the final point: Betrayer is a semi-open world game with a sort of mystery setting for the story, setting out a bunch of clues in the map and letting the player explore to find them, no hand-holding. This leaves the entire experience of Betrayer to the player's whim, do you scour the map finding each and every bit or do you rush through to the end? While this is a good idea, the game's design is flawed and incapable of supporting it. Resulting in a lot of backtracking, boredom and searching. Being "alone and abandoned with no hand-holding" requires that the game fully captivates its player, getting them excited and invested in the experience making them want to discover everything and providing positive reinforcement with a sense of accomplishment. Betrayer has none of these, you find a clue, make a note of it and maybe a ghost will say something about it. This results in the exploration of Betrayer being uneventful and disappointing. Not to mention that in order to uncover a large majority of items hidden you need a shovel, which can be found roughly half way through the game, resulting in a LOT of backtracking.

While Betrayer missed the mark, the ideas are there. It could have been so much better, creating a unique open world mystery game in the 1700's with supernatural twists and heart pounding stealth combat. Instead Betrayer is flat, repetitive and lacking in a lot of substance. Despite my enjoyment with the basic idea of the game and all of it's potential, I can't help but feel disappointed with the direction the game took instead. The appeal is there but doesn't build up to anything worthwhile.

If you enjoyed this Betrayer review, you're encouraged to discuss it with the author and with other members of the site's community. If you don't already have an HonestGamers account, you can sign up for one in a snap. Thank you for reading!

© 1998-2022 HonestGamers
None of the material contained within this site may be reproduced in any conceivable fashion without permission from the author(s) of said material. This site is not sponsored or endorsed by Nintendo, Sega, Sony, Microsoft, or any other such party. Betrayer is a registered trademark of its copyright holder. This site makes no claim to Betrayer, its characters, screenshots, artwork, music, or any intellectual property contained within. Opinions expressed on this site do not necessarily represent the opinion of site staff or sponsors. Staff and freelance reviews are typically written based on time spent with a retail review copy or review key for the game that is provided by its publisher.