Amnesia: A Machine For Pigs is a first-person horror adventure game developed by The Chinese Room in association with Frictional Games for the HPL Engine 2. You play as Oswald Mandus, a man who ventures deep into a sprawling underground machine in search for his missing children -- and his sanity.

When I first arbitrarily decided to play all of the Frictional Games games in order, I had some mental back and forth as to whether or not I should include A Machine For Pigs in that list. It's based on a Frictional Games property, and Frictional Games did oversee the creation of it if the developer interviews are meant to be believed, but it's also a wholly different project made by a studio more famous for their walking simulators than their horror games. Pile onto that the fact that everyone and their grandmother seemed to be sorely disappointed by it when it game out and that it never seemed to have as much buzz as The Dark Descent got, and I wasn't really sure what I would be getting into.

Evidently, I played it anyway, and I've got to say that I actually was very impressed by it. I've heard claims that the game was nothing more than a Layers of Fear style walking sim horror game. I've heard claims that it was sloppier and nowhere near as polished as its progenitor. I've heard claims that it missed the point entirely of the original game's intentions. None of these things were true, at least in my eyes. As I played the game I found a thoughtful and surreal horror experience with puzzles on par of the original and monsters that were even scarier. I found the story to be a moving, thoughtful odyssey which expanding on and touched topics from the first game in new ways. I also found a heck of a lot of lengthy, boring, journal entries. 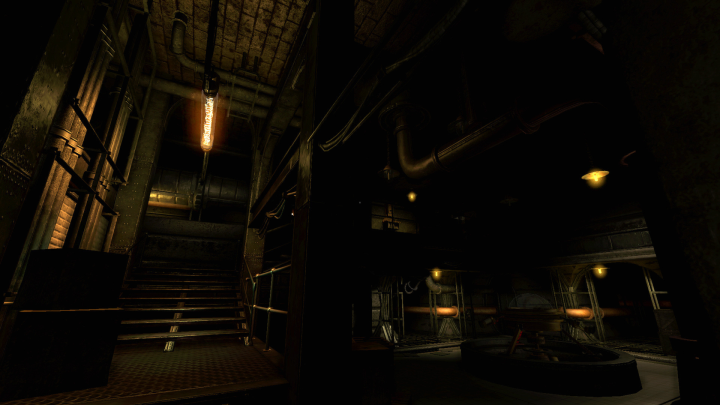 Okay, it's a bit harsh of me to say the journal entries where entirely 'boring,' but unfortunately A Machine For Pigs falls back onto the Penumbra issue of providing two thirds of the exposition through notes you find in the environment. The Dark Descent had a pretty similar amount of journal entries, but the ones necessary for understanding the plot, i.e. Daniel's journey entries, were all read aloud by Daniel, which at least made them slightly more tolerable. The only things which are read aloud in A Machine For Pigs are real-time conversations you have with the game's mysterious benefactor-ish character, and little gramophones which play tapes of an interview your character had before the game began.

You can't pick up most objects anymore, and so the ones you can tend to be obvious puzzle solutions somewhere else on the map. They balance this out by removing your inventory. Any vital puzzle items must be hand carried to another area in the map, which I've heard people say made the game 'less interesting' but in practice I found it to be more stressful, in a good way. Once you put an object into your inventory, you don't have to worry about it anymore in The Dark Descent. In this game, the idea of having to hand carry something without leaving it behind whilst being stalked by enemies is inherently interesting, but unfortunately the game never actually requires you to do that. It just makes you feel like it will require you to do it, at some point. 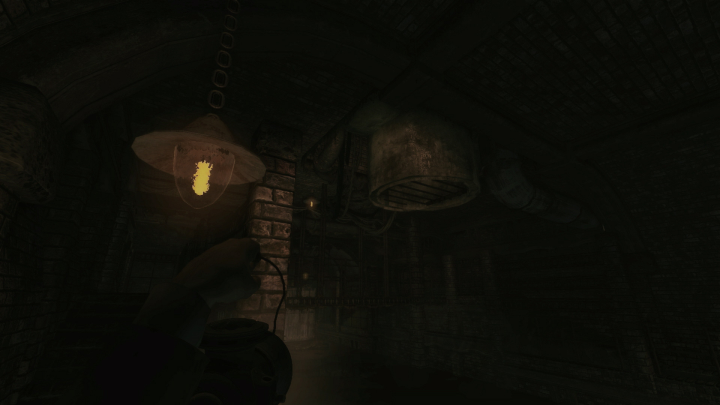 The game is also a bit short. Pacing wise it felt fine and the beats were all impactful and had the necessary downtime in between them, I only wish I got the chance to really 'exist' in this world. That being said, the ending of the game was fantastic, in my opinion. The voice acting is superb as is the Frictional Games standard, and the talking heads they give them to are more interesting than Daniel and Alexander were, in my opinion.

If you liked Amnesia, I think it's absolutely worth giving this game a shot. The ways this game toys around with the themes of redemption are significantly more in-depth than The Dark Descent and it's steampunk-esque theater of the absurd presentation create a strange haunting and fascinating journey. Recommended.

If you enjoyed this Amnesia: A Machine for Pigs review, you're encouraged to discuss it with the author and with other members of the site's community. If you don't already have an HonestGamers account, you can sign up for one in a snap. Thank you for reading!

© 1998 - 2022 HonestGamers
None of the material contained within this site may be reproduced in any conceivable fashion without permission from the author(s) of said material. This site is not sponsored or endorsed by Nintendo, Sega, Sony, Microsoft, or any other such party. Amnesia: A Machine for Pigs is a registered trademark of its copyright holder. This site makes no claim to Amnesia: A Machine for Pigs, its characters, screenshots, artwork, music, or any intellectual property contained within. Opinions expressed on this site do not necessarily represent the opinion of site staff or sponsors. Staff and freelance reviews are typically written based on time spent with a retail review copy or review key for the game that is provided by its publisher.