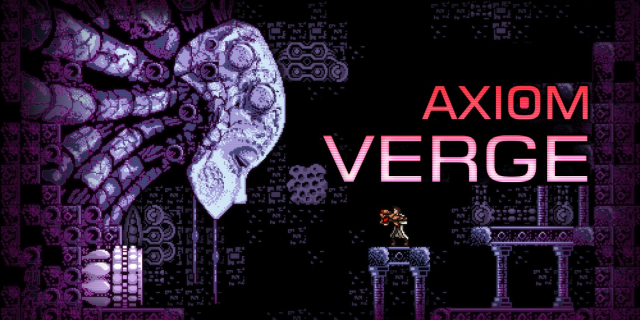 Like the roguelike, the metroidvania genre has been watered down as of late, sometimes meaning nothing more than you can backtrack if you want to find shortcuts and stuff. Axiom Verge is about as faithful as you can get to the source material. There are no waypoints telling you where to go next. You will get lost. You will spend half an hour trying to figure out where to go next. And once you find the way, itll feel amazing, kind of like discovering a hidden room in your own house. But being lost for a while isnt so bad, because theres optional hidden stuff everywhere that will make you more powerful in a staggering number of ways. Rest assured that you will definitely need to hunt around a bit for some power, as the games difficulty can ramp up to near-impossible levels if you dont have enough HP or firepower to deal with the stuff you'll stumble across. With its branching paths, interconnected areas, and numerous secrets, the level design borders on perfection.

And then there are the upgrades. Youve got your standard expected powerups like high-jump, life expansions, and alternate weapons but theres also a half-dozen powerups that you will never see coming, and this is where the game really shines. In Metroidvania games, weve trained ourselves to watch our surroundings and say Hey, theres a blocked passage with some obstacles in front of it. Guess I better come back when Ive got the right upgrades. But Axiom Verge does a great job of keeping this from even happening; the powerups are so unique and different than what youd expect that youll never be able to spot where theyre used ahead of time, so youll have to periodically wander around with a fresh eye to re-evaluate the world using your current abilities. If you remember that magical moment when you got the Space Jump in Super Metroid and realized Whoa, I can fly now?! Youve got a good idea of what to expect from the powerups in this game.

The sound and art direction is scary good. Without spoiling anything, the game pays very close attention to detail, and youll constantly be finding little things to appreciate. The artistic design of the environments will trigger a lot of recognition not only from Super Metroid, but also from Fusion and Zero Mission. I love how creepy some of the environments are; if youve ever felt that Metroid games didnt have enough creepy organic elements in the stage design, this games got you covered. 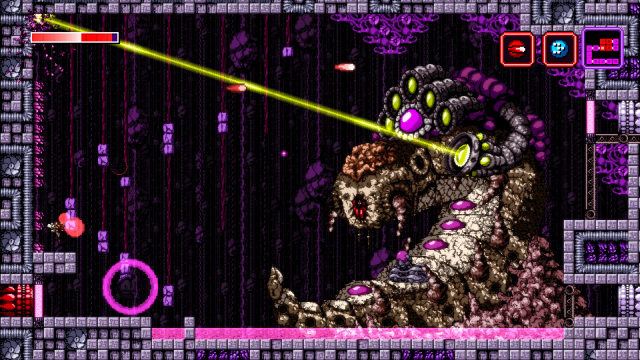 My nitpicks are comparatively small:

- Late into the game, the controls start to get questionable. Youll have to juggle about 6 buttons for special items alone, and theres one item which is too easy to misfire on accident if youre not careful. Hope you've got a controller.

- The storys a bit on the incomprehensible side. There is no awesome baby Metroid saves you moment; instead there are only a handful of "WTF" moments and no straightforward explanation for them. The ending was less than satisfying, and apparently the biggest questions will be answered in the sequel.

- While the soundtrack is very stylish and distinguishable, I found it lacking some powerful melodies. Out of all the tracks, only about one of them is melodic enough to hum. Most of the tracks have a heavy, same-sounding techno beat which could get tiring to hear after a while.

Overall, Axiom Verge does for Super Metroid what Shovel Knight did for Mega Man, going above and beyond a simple homage and demonstrating an astounding understanding both of what Metroid fans wanted, and how the formula could be expanded using new ideas. Game length is about 10 hours on the initial playthrough if you take your time and hunt for stuff without a guide. The homage bits are spot-on, and the new ideas are brilliant, sometimes shocking. 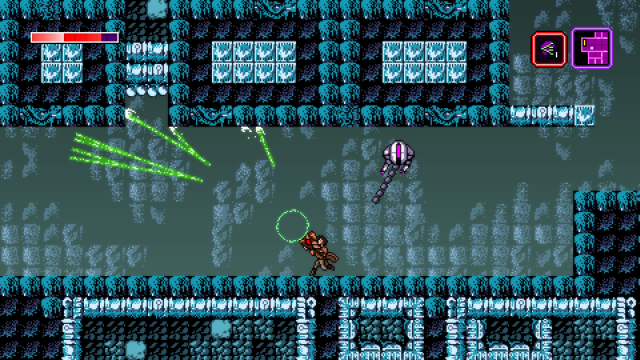 Is it worth the $20 asking price? Its a bit steep. I think that if youre not sure what youre getting into, wait for a 25-50% sale. But if I were to ask you Have you ever wished that you could go back in time and re-live the day you played Super Metroid for the first time, so that everything would feel new again? and you were to respond hell yes, then the game is worth every penny. Go support this developer; you wont regret it.

© 1998-2022 HonestGamers
None of the material contained within this site may be reproduced in any conceivable fashion without permission from the author(s) of said material. This site is not sponsored or endorsed by Nintendo, Sega, Sony, Microsoft, or any other such party. Axiom Verge is a registered trademark of its copyright holder. This site makes no claim to Axiom Verge, its characters, screenshots, artwork, music, or any intellectual property contained within. Opinions expressed on this site do not necessarily represent the opinion of site staff or sponsors. Staff and freelance reviews are typically written based on time spent with a retail review copy or review key for the game that is provided by its publisher.