Alan Wake is a psychothriller game based on supernatural powers. It shows how powerful darkness really is. The game is set in a rural town called Bright Falls in Washington state, USA. Alan Wake is a professional writer from New York City who decides to go on a vacation in a small town. However, his vacation turns into a nightmare as he is attacked by possessed beings known as the Taken. Wakes wife is apparently kidnapped from their cabin located in a nearby lake, encouraging Wake to look for her in the wilderness. His attempts to retrieve her are played across six episodes that feel like a TV show.

As Alan Wake looks for his wife, manuscript pages are scattered in each episode. The manuscript pages flesh out the story of the suspense Mr. Wake is going through, although he does not remember writing it. There are many strange plot twists such as crazy things happening shortly after reading about them in his manuscript pages. Wake is a disturbed man and this sets up effective storytelling.

The gameplay is mainly set during the night, when darkness rears its ugly head. There are a few daytime scenes, but the game functions better in the dark; too many daytime scenes would have taken away the moody feel of the game. There are many scary encounters with the Taken, who are armed with knives and other projectiles ready to kill Wake. You can evade these possessed humans by running from their attacks, employing a cool cinematic dodge. Every time you enter a new store or turn a corner you feel anxious about who or what will come after you. The Taken are vulnerable to light, so that is when your flashlight, flares, and flashbang grenades come into play. 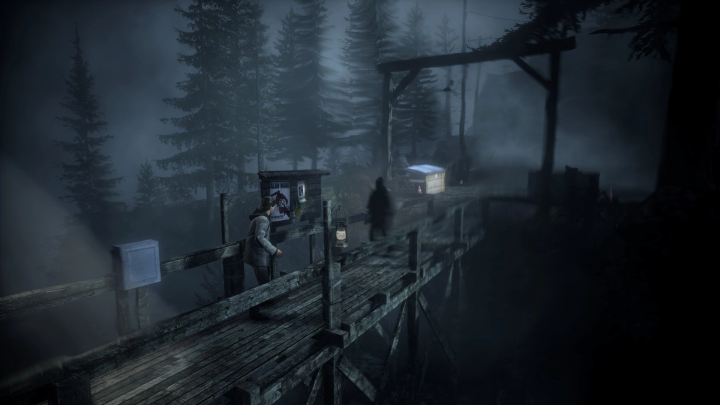 Aiming at the Taken is required, but shooting at them without aiming a flashlight at them to remove their strength of darkness is a waste of valuable ammo. As soon as you take away their darkness, you can shoot them with your conventional weapons like a revolver, shotgun, or hunting rifle. Ammo is not very plentiful, so it is important to use your attacks wisely. It's sometimes wiser to run away from the Taken so that you can reach the next safe haven, a place where strong light is projected onto the ground. The Taken do not dare enter the light for fear that they will be killed.

When the Taken are not attacking you there are possessed objects such as barrels, cranes, bulldozers, etc. These possessed objects seem to be from the famous movie Poltergeist. You must use Wakes flashlight or flares to disintegrate possessed objects, as they are vulnerable to light and cannot be shot. I found it quite scary to see a bulldozer suddenly turn on and chase me while no one was inside driving and a few Taken were attacking. This is when your battle skills are tested to see how good you are with your flashlight, flares, and flashbang grenades. Your flashlight loses battery power and must be recharged. The limited battery power adds to the suspense of having to insert a new battery while the Taken and/or possessed objects are threatening to kill you. It is also quite unsettling when flocks of ravens suddenly descend upon you from the sky and the only way to eliminate them is by using light sources. The only problem I have with the combat with the Taken is that it may feel a little repetitive when heading toward the end of the story in episode 6.

The graphics of Alan Wake are still neat on the PC. Bright Falls looks gorgeous in the day during rare daytime scenes. The night looks detailed enough when looking at an abandoned farm that looks decrepit. The graphics make this small town look authentically rural. I found a few graphical glitches in some indoor settings, but they are rare and superficial. 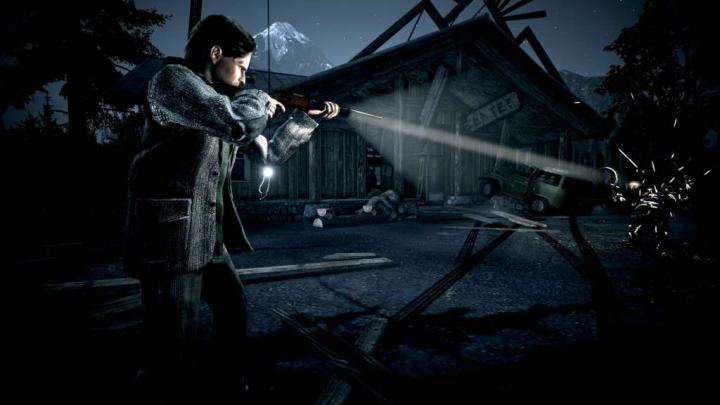 I highly recommend Alan Wake for its well written horror story that translates into spooky atmosphere for the gameplay. It is a creepy game that does not let up and keeps the combat tight and intense until the very end for the main game as well as for the DLCs. I firmly believe that the DLCs, although short, are worth playing and retain the creepy atmosphere.

© 1998-2022 HonestGamers
None of the material contained within this site may be reproduced in any conceivable fashion without permission from the author(s) of said material. This site is not sponsored or endorsed by Nintendo, Sega, Sony, Microsoft, or any other such party. Alan Wake is a registered trademark of its copyright holder. This site makes no claim to Alan Wake, its characters, screenshots, artwork, music, or any intellectual property contained within. Opinions expressed on this site do not necessarily represent the opinion of site staff or sponsors. Staff and freelance reviews are typically written based on time spent with a retail review copy or review key for the game that is provided by its publisher.