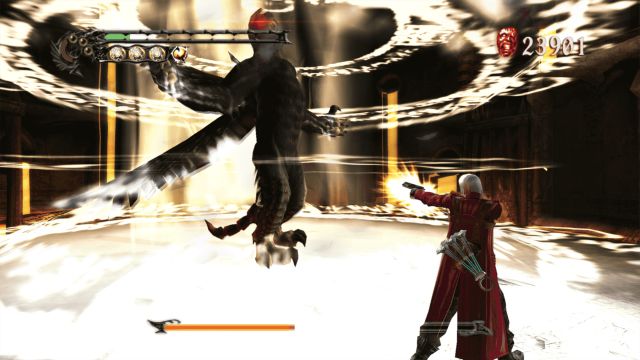 Games are a medium that has been well tapped into in terms of entertainment value, but the medium has yet to reach the artistic potential already realized by literature and film. Some games discard narrative in favor of a more polished experience. Others compromise gameplay in favor of strong storytelling, or at least a facsimile of storytelling that'll fool enough people to net a few game of the year awards. Only a small handful of games have managed to achieve that awe-inspiring nirvana of being an astounding gameplay experience while delivering a relevant and well-told message. Despite the daunting complexity of its gameplay and the unassuming surface of its story, Devil May Cry 3 is one such game, setting a loftier standard by which all games should be judged.

After an immaculate opening that perfectly sets the tone of the game by depicting seeds of familial strife and feats of awesome combat prowess, a game-changing layer to the already deep yet intuitive Devil May Cry combat system is introduced: the Style System. You've your melee and gun attacks, but the Style button offers a whole new set of moves depending on which Style you have equipped. Swordsman Style gives you more melee attacks to work with, Gunslinger makes gunplay more diverse, Trickster increases mobility with dashing and teleportation, and Royal Guard lets you block and counter enemies if you have the right timing. Each of these Styles can be upgraded in the shop or by an experience points system, thus subtly encouraging the player to try out a Style to see even if it doesn't immediately click with him; encouraging a player to see a Style's potential causes the player to realize his own potential. All of these Styles have more techniques for the player to use, and their nuances become more appreciable and effective the more the player experiments with them. On top of all this added depth is an even more robust core combat system, a wider moveset, five main weapons and five firearms, lots more contextual actions, and huge enemy variety.

However, having a great deal of depth isn't enough to carry a game. Plenty of modern games have massive pools of abilities at the player's disposal, but what DMC3 has over other games is the subtle encouragement to try new ways of approaching combat. In a game like Skyrim or Mass Effect, you can pick one way of approaching combat, however diverse your options may be, and comfortably stick with it; those games even encourage stagnation by making specialization a priority. In Devil May Cry 3, it's possible to beat any given foe with any given loadout, but some foes will be more difficult to take down with a certain moveset than others will be. Still, this could be said of many other games, but DMC3 is unique in its implementation of a truly ingenious communicator of skill: the Style Meter, a small hud portion that serves as a sort of combo meter that raises the longer a combo lasts, so long as a variety of moves are being used instead of spamming the same few. Later games such as the Bayonetta series have implemented a similar system, but DMC3 asserts its superiority here as well by a clearer, more personable interface. Would you rather have a string of arbitrary numbers indicate the quality of your work, or a clearly tiered system with such states as "Dope," "Crazy," "Blast," and so on? A similar system existed as early as the original DMC, but DMC3, in its never-ending quality of perfecting its elements, just had to had a little bar meter in the mix to make you all the more certain of goings-on in battle.

Clarity is indeed the most important part of game design, and DMC3 demonstrates this in the enemy design, as well. Even a huge variety of over 20 enemies was no excuse to copy-paste, and this can be seen in even some of the most similar foes, such as the Hell Prides, the Hell Lusts, and the Hell Sloths, all three being scythe-wielding reapers in cloaks. Clad in shadowy purple, the Hell Prides shamble and creep up on you before you realize it; in sharply tattered red garb, Hell Lusts dash in and out of your reach with sudden, reckless abandon; the pale Hell Sloths may be gaunt, but they move slowly and rely on teleportation to gain ground. Any art team less masterful than the creators of DMC3 would make these foes samey and indistinguishable during battle, but the artistry here is so elite that each carries instantly recognizable appearance, behavior, personality, and thematic relevance. Each foe requires a unique approach, and the combinations of foes during battle gives further challenging on how to tackle a situation. 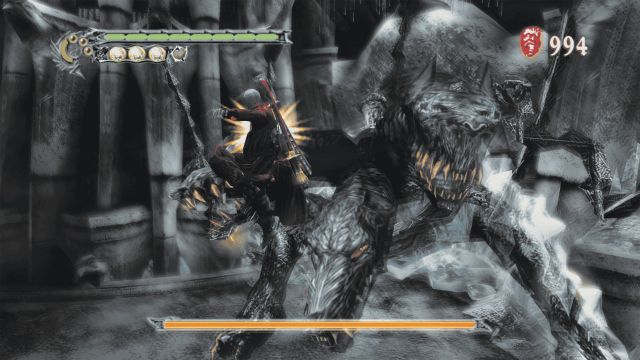 You'll need to master those game mechanics, too, because you're in for a challenge that is very difficult indeed. Difficult but fair. Some games are unfairly difficult due to one-hit kills or poor level design; many more operate on robbing the player of essential information (such as attack hitboxes or when an enemy will strike) in order to pose a threat. DMC3 has hordes of tough enemies but gives you everything you need to overcome them. Items make a return to help you when in need, but it's entirely feasible to never need them due to the immaculate pace the game takes in introducing you to its mechanics. It even ties into the plot, as Dante trying to match a force more powerful than himself is something a player growing in ability and aptitude can relate to. The challenge of DMC3 is not some arbitrary gate to prevent certain people from playing; it's a part of the experience and it helps craft the tone of the game. Would this game be better or worse if one could just skip anything he couldn't easily surmount? It's perfectly fine to have high difficulty in a game if the game is fair and introduces concepts so that the player has the tools he needs to succeed and knows how to use them. Here, challenge is a hindrance but a challenge, and you cannot find such an experience in any other medium.

Although the ability progression and combat learning curve are more than enough to propel one to the end, DMC3's plot is a strong driving force, too. This is the first DMC game chronologically, but it eschews the inherent predictability of prequels by introducing interesting story elements and adding nuance to events further down the timeline. At the start of the story, Dante has a fairly aimless personality, wanting to just mind his own business. However, his brother Vergil has enlisted the aid of a malicious human named Arkham to go all Doom and open a gate to Hell in order to gain a powerful sword belonging to Dante and Vergil's late father, Sparda. The two twins are at odds with each other not so much because one finds the other's actions morally reprehensible so much as the firebrand loner and the calculated manipulator just don't like each other. Dante and Vergil prove to be dynamically written as they each partake in an arms race of ability towards each other, with Dante having to keep up with the already formidable Vergil's increasing strength demonstrated in the three intense battles with Vergil that mark the beats of the three-act structure. Vergil provides a constant measure to the player's increasing skill while being a true monolith of nuance and style to contrast the equally impressive (if comparatively as uncollected as the new player at first) Dante. As absolutely excellent and entertaining as the dialogue and spectacle is, not nearly as many players would remember these two titans of well-written video game characters if each didn't have his own characterization and humanization in the form of desires, emotions, and faults that are all universally relatable, from wanting absolute power over destiny even to the detriment of others to wanting to be left alone and rid of any rival.

Bringing all this delightful drama together are strong themes of family and responsibility. Dante and Vergil each must deal with the ripples of the actions of their late father, with Vergil taking an opportunistic stance and Dante taking an apathetic one. More than merely peripheral to the main plot is Lady, a mysterious woman who is revealed to be the daughter of Vergil's scheming partner in crime Arkham. She has no obligation to be the one to stop her power-mad father, but she nevertheless endeavors to reign in the negative consequences of his actions, taking up the responsibility for the actions of another, even shedding her previous life and name to do so. The selflessness of her actions inspires Dante in such a way that reminds us that our actions have the ability to change others for better or worse. After living to retaliate and show off only to be one-upped by circumstances out of control, Dante awakens not only his potential as a warrior but as a moral human being, just as the player realizes his skill at the game and its message's relevance. Long before the norm for storytelling-focused games became mere heavy-handedness, shakycam cutscenes, and walking + talking filler, Devil May Cry 3 showed the gaming world how to make a meaningful story with subtle undertones beneath a thrill ride of a story, expertly directed cutscenes to reward overcoming challenges, and a meaningful story that synthesized with peerless gameplay, all in a simpler, sleeker, shinier package.

An exhilarating, intelligent adrenaline rush from start to finish, this game is one for the ages and raising the bar for every single action game of every kind. Few other games showcase the strengths of the medium as well as DMC3, providing masterfully crafted gameplay that intertwines with a story with relevancy to all of us. For these reasons and more, this game is Devil May Cry 3: Dante's Awakening is a strong contender for being my absolute favorite video game. 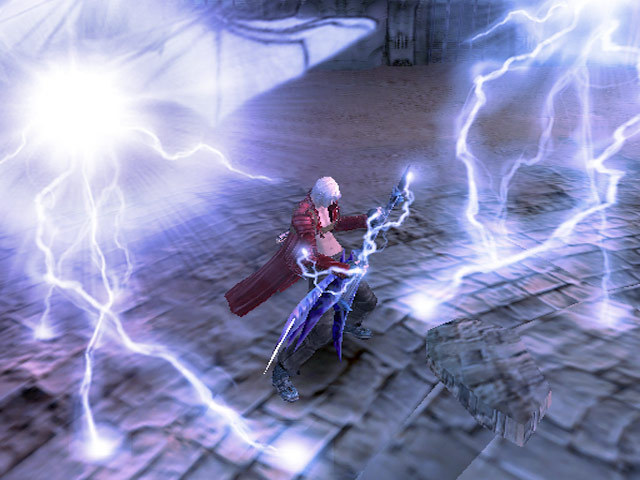 If you enjoyed this Devil May Cry 3: Dante's Awakening review, you're encouraged to discuss it with the author and with other members of the site's community. If you don't already have an HonestGamers account, you can sign up for one in a snap. Thank you for reading!

© 1998-2020 HonestGamers
None of the material contained within this site may be reproduced in any conceivable fashion without permission from the author(s) of said material. This site is not sponsored or endorsed by Nintendo, Sega, Sony, Microsoft, or any other such party. Devil May Cry 3: Dante's Awakening is a registered trademark of its copyright holder. This site makes no claim to Devil May Cry 3: Dante's Awakening, its characters, screenshots, artwork, music, or any intellectual property contained within. Opinions expressed on this site do not necessarily represent the opinion of site staff or sponsors. Staff and freelance reviews are typically written based on time spent with a retail review copy or review key for the game that is provided by its publisher.