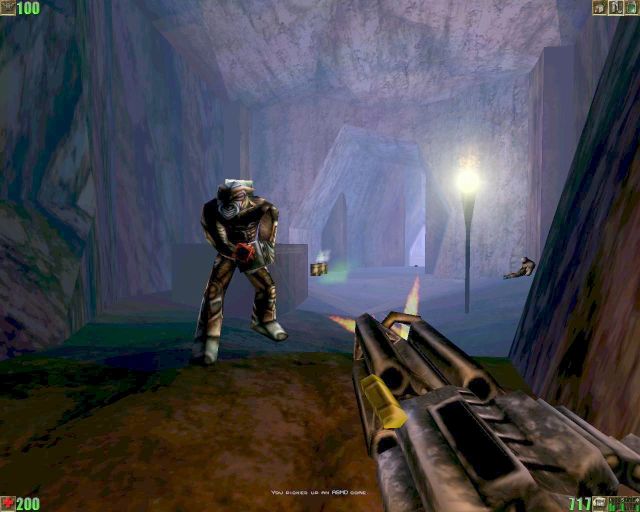 The FPS games released during the four years following the earth-shattering Quake were interesting specimens. They finally had the technological means to perfect the ideas showcased in Doom, but as soon as Quake's release in 1996 consumers were feeling fatigued by all the Doom-style games and mods. No longer satisfied with iteration and refinement, people wanted innovation. The period around Quake's release was a fascinating time of experimentation.

Years after the very literary storytelling approach of Snatcher, video gaming found its storytelling spokesman and its new action standard in the form of Half-Life. Uncompromising in its raw grittiness, it was a perfect blend of the richly grim aesthetic of the 90s FPS with a cinematic approach that allowed for discovery without resorting to robbing the player of control. By recognizing what cinematic aspects worked in games instead of trying to emulate cinema in every possible fashion, Half-Life's genius in presentation set the groundwork for countless games to follow. However, sandwiched between Quake's own sequel and Half-Life was another game that met a balance between the two eras, between the brutal and the cinematic.

That game was Unreal, one of the best games ever made. 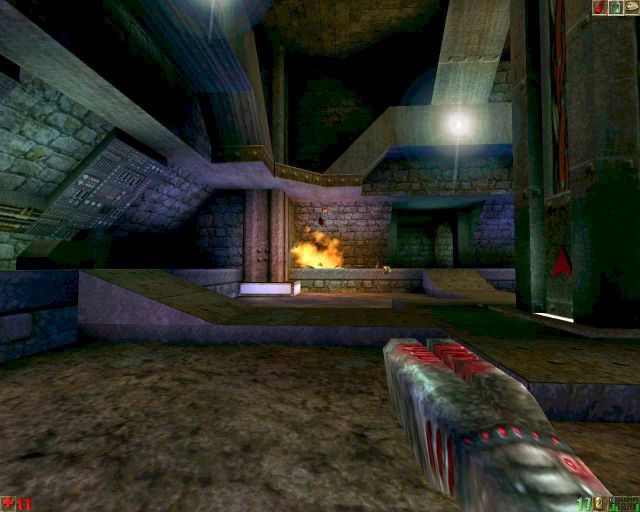 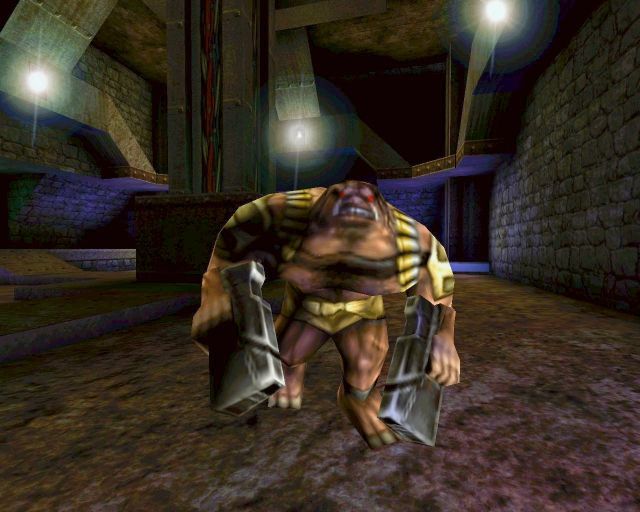 It's the future. You're a human. A prisoner. Your prison ship has crashed on a hostile alien planet. Screams are filling the air, lights are flickering, and the hull is trembling. Get out. Survive. Unreal's setting and premise are conveyed not by exposition but by visual means. It isn't truly cinematic, though; upon starting the game, the player is never robbed of control until the very end. Unreal is a story of interaction and discovery, not forced observation. You are a participant, not a spectator. As far as the story itself is concerned, it is neither a tale of dynamic characters nor a study of themes. You're just trying to survive. And you're in a world in which survival isn't easy, for the jungles, caverns, and ice caps of the planet of Na-Pali are as lethal as they are atmospheric.

Visually, Unreal has aged as well as a game from 1998 can, but it holds up due to good presentation. Who can forget the notes of "Dusk Horizon" rising as the jungles of Na Pali lie before him upon exiting the prison ship? Unreal boasts one of the best soundtracks of all of video games, and the wondrous sound design demonstrated in the crumbling ship continues to amaze as fauna screech and sing in the distance, bringing the game's world to life. The game's textures may be muddy (though there are mods for that), yet a liberating sense of direction make this seem minor. Will you climb down the mine shaft, head towards that house in the distance, or jump off the cliff into the water? Unreal's ultimately linear levels may have only one exit, but they have unmatched variety and scope that impresses even today. 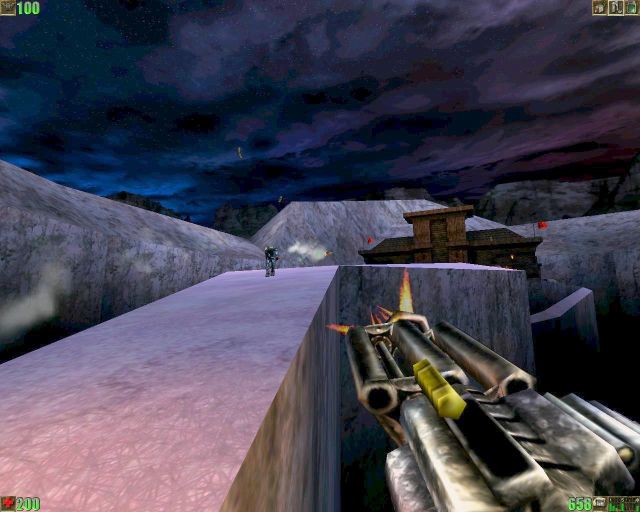 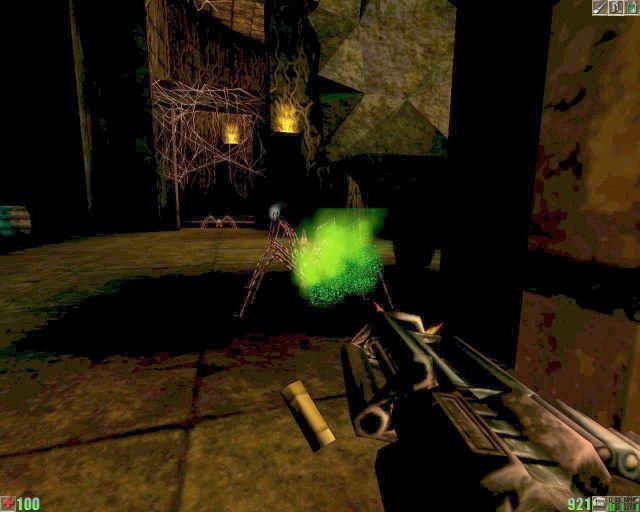 Aside from being an example of Unreal's visual and sonic prowess, the triumphant exit from the prison ship is an example of the chief strength of the medium of video gaming; interactivity. You weren't told about circumstances in the ship; you chose to learn so at your own pace by discovering audio-logs. You didn't watch someone climb out of a wreckage that claimed the lives of dozens of others; you accomplished that. You aren't going to watch the protagonist journey across a wondrous planet, seeing majestic sights and overcoming vicious foes along the way; you're going to do that. Now get to it.

As for doing that surviving bit, you're going to have to make good use of the tools at your disposal in order to do so. Unlike the constricted movement of the console shooter, Unreal's superior controls are speedy and responsive, even allowing the player to alter the game's speed from the options menu. Gunplay is sublime, with each weapon being wonderfully unique and viable in combat. Most vitally, almost the entirety of your arsenal is projectile-based, meaning that you can dodge enemy fire, introducing a layer of skill that makes for gameplay much more fun than the unfulfilling hit-scan gunfights so common today. This system unobtrusively communicates the trajectory of fire from you and your foes while demanding more strategy than just "point at the guy and click" or figuring out the invisible trajectories of fire spreads. 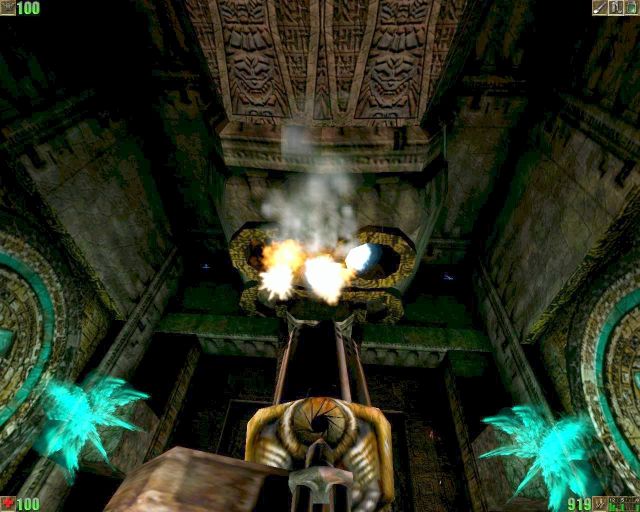 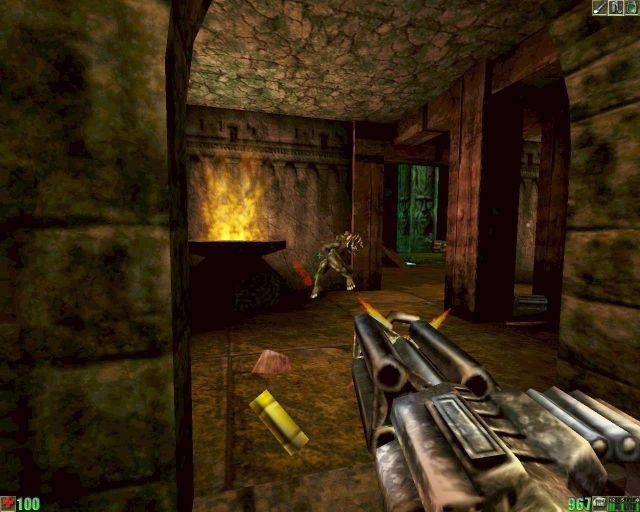 It's amazing how this gameplay is liberating for the player weary of forced constraints in other games. Many shooters force a cover-based approach by forcing the player to wear concrete shoes and die from just a few stray bullets. A similar epidemic is the forced necessity to get close to opponents just so you can hit them with your inaccurate weapons. Taking cover and maneuvering close to opponents are often viable strategies in Unreal, but the mechanics never force you into a certain role. Rather, you'll be doing a little bit of everything to survive, combinations of weakening enemy hordes from a distance, taking cover, managing ammunition and medical kits, and closing in for the kill as you and your foes frenetically dance your ways through projectiles zipping about. Blissful perfection.

Speaking of blissful perfection, the arsenal of Unreal cannot be overlooked. It's unique in that some weapons embody archetypal roles set by older shooters -- the pistol, the shotgun, the sniper rifle -- but no tool is inherently superior to another; you can overcome challenges using any weapon. Your playstyle, not level design, determines how you play. For instance, a pulse rifle use its primary fire to pick off enemies at range, its slower secondary fire to hit enemies up close, or the splash damage caused by hitting the secondary projectile with the primary projectile to hit enemies behind a corner. Of course, being armed with spectacular weapons and true understanding of their capabilities means Unreal must do more than lazily give enemies aimbot accuracy in order to challenge you, but the game is up to the task. 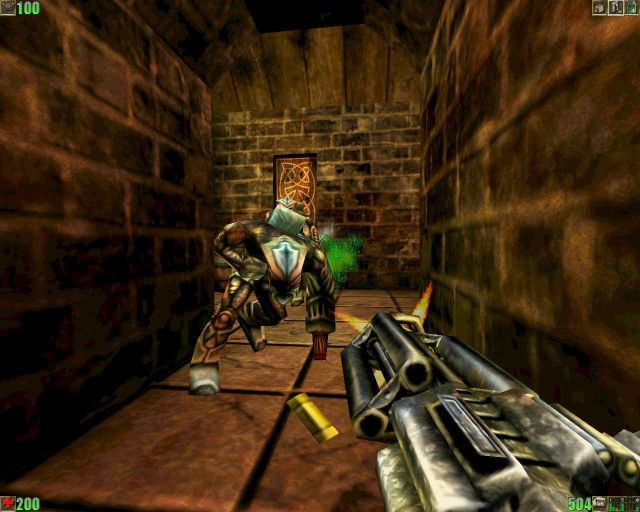 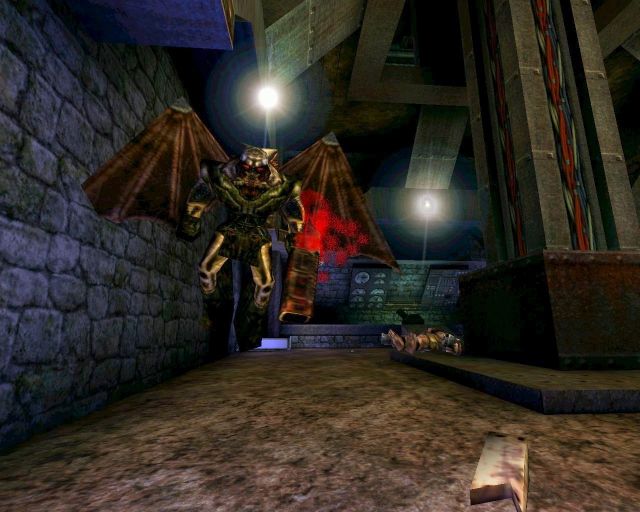 Unreal has perhaps the best enemy variety in any FPS to date, and all of them have the AI and capabilities to challenge you without relying on cheap tricks. The first foe you must overcome is a brute with rocket launchers for arms, setting an appropriate tone for the challenges that lie ahead, with wizards an Predator-lookalikes keeping you on your toes. Enemies are vast and varied, and this diversity fuses with the excellent level design to keep every encounter fresh. Like you, foes can strafe and dodge shots, and some wield the same weapon types you have, subconsciously preparing you for the great multiplayer as you have a fun time in the sublime campaign.

Unreal is almost an oddity when it comes to the delusional nihilism of most modern multiplayer games. Some die forever from the folly of central server-reliance; others when too few players wish to play their multiplayer to keep sustainable matchmaking.. Unlike multiplayers dead and on death row, Unreal wisely blesses us with excellently programmed bots to immortalize the game. The formidable intelligence of the bots serves not only to give the component of the game infinite lasting power but also to prepare one for combat against human players, of which there are many even today. Plus, this is a good PC game with modding tools, so should one tire of the standard maps, there is a titanic number of custom maps, new game-modes, and fan-made campaigns to keep one playing Unreal for years to come. And Unreal is a game that deserves its immortality.

Imagine video gaming today if more heeded the wisdom of Unreal's design. Less robbery of control, less forfeiting of the strengths of the medium. More perfect gameplay in movement and gunplay, more staying power by means of bots and modding compatibility. It's a shame that these superior features are not the standard in today's gaming environment. However, we should be thankful that the genius of Unreal ever came to be in the first place, and that Unreal did demonstrate the strengths of these virtues for those who were listening. 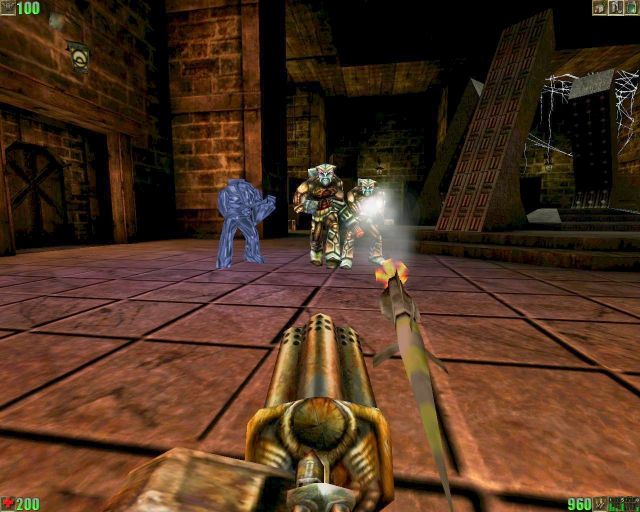 If you enjoyed this Unreal review, you're encouraged to discuss it with the author and with other members of the site's community. If you don't already have an HonestGamers account, you can sign up for one in a snap. Thank you for reading!

© 1998-2021 HonestGamers
None of the material contained within this site may be reproduced in any conceivable fashion without permission from the author(s) of said material. This site is not sponsored or endorsed by Nintendo, Sega, Sony, Microsoft, or any other such party. Unreal is a registered trademark of its copyright holder. This site makes no claim to Unreal, its characters, screenshots, artwork, music, or any intellectual property contained within. Opinions expressed on this site do not necessarily represent the opinion of site staff or sponsors. Staff and freelance reviews are typically written based on time spent with a retail review copy or review key for the game that is provided by its publisher.