Senran Kagura is not a particularly ambitious franchise. Until now, its developers have been content to crank out serviceable (albeit really fun) brawlers. The latest entry is a competitive shooter, though, and I was worried the team may have bitten off more than it could chew. Happily, my fears were unfounded. Peach Beach Splash is not only a refreshing take on shooters, but the best one Ive played since Titanfall 2.

Senran Kagura: Peach Beach Splash opens with girls from all four shinobi schools taking advantage of a particularly warm winter to indulge in summer activities like cookouts and taking dips in swimming pools. The bout of warm weather is obviously unnatural, and its revealed that the only way to reverse it is by having shinobi partake in a water gun competition known as Peach Beach Splash. Soon after, the girls from all four schools are transported to a festival environment that facilitates just such an event.

As you may have already surmised, Peach Beach Splash is very silly even by Senran Kagura standards. The game must be commended, however, for staying true to its melodramatic roots even in this most unlikely of narratives. Fans of Senran Kagura lore will find a lot to like in the games rather robust story mode, which not only follows the arcs of each schools path through the tournament, but also offers a separate segment that follows specific characters through some rather humorous scenarios. 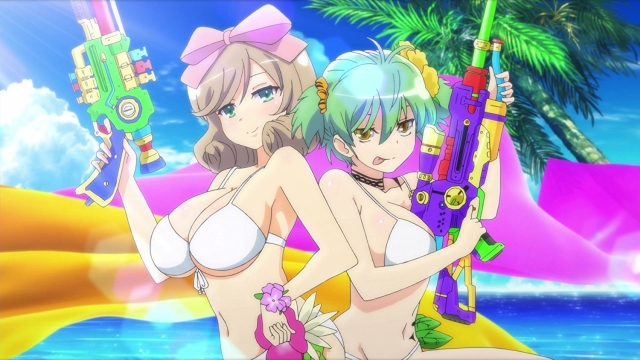 Like most shooters, however, the real meat in Peach Beach Splash lies in its multiplayer content. Here, the game shines the brightest. When the title was first announced, many assumed it would be a Splatoon ripoff. Instead, the game has seemingly taken most of its cues from the likes of Vanquish and Titanfall with mobility and loadout customization being of the utmost importance.

Lets start with mobility, as its easily the most impressive aspect of Peach Beach Splash. Regular movement is standard, but it feels good and gets the job done. What sets this game apart, however, is that each girl has a pair of water jets attached to her back. After jumping, a second tap of the button will send players high into the air with a burst of water. By holding the button, players can fly until their water reserves are depleted. More excitedly, for me at least, players can also hold the Circle button and rocket forward at high speeds. If you ever wished Vanquish with its jet boots had a multiplayer mode, Peach Beach Splash has you covered.

The only part of the game that feels particularly sluggish is its aiming, which is partially the fault of analog stick limitations. Instead of implementing an auto-aim feature like most console shooters, Peach Beach Splash opts for a lock-on feature. It works pretty well for the most part, but can be frustrating when you are attempting to track a particular opponent and theres more than one in your sights. 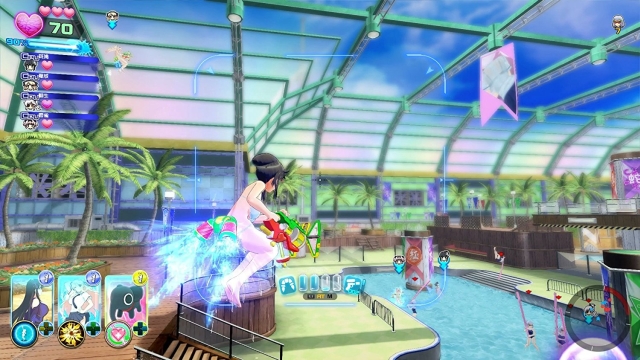 Loadout customization is incredibly impressive, and its obvious the development team has studied shooter design from the past decade. In particular, it seems the team has taken a lot of inspiration from Titanfall. Each player has full control of their loadout, from weapons to burn cards. To start, the weapons have a great amount of variety from basic pistols to water bazookas and mobile showers that can all be upgraded to dish out more damage. Each girl can also equip up to six burn cards and three pets with three cards from these nine dealt out at the beginning of the match. The cards either provide offensive options, buffs or (in the case of pets) a limited-time companion that will fight alongside players. Each card has its own cooldown period that affects when it can finally be used. Once a given card is used, a new one from the deck is slotted in for use.

Thankfully, Peach Beach Splash has a mostly self-contained economy where players earn card packs through playing single-player, winning multiplayer matches or using earned in-game currency to buy new packs. Duplicates never feel like a waste, as they can be used to level up existing cards, weapons or playable characters. In this way, the game avoids feeling like a pay-to-win title, which it easily could have become.

As for the general flow of matches, each round begins with players spawning on opposite ends of the map. From there, the maps are large enough with numerous back alleys and passages that players can either engage in the spacious central area or take it to the nooks and crannies. The maps are designed in such a way, however, that you are encouraged to always be on the offensive. This dynamic brings a great deal of energy to each match. 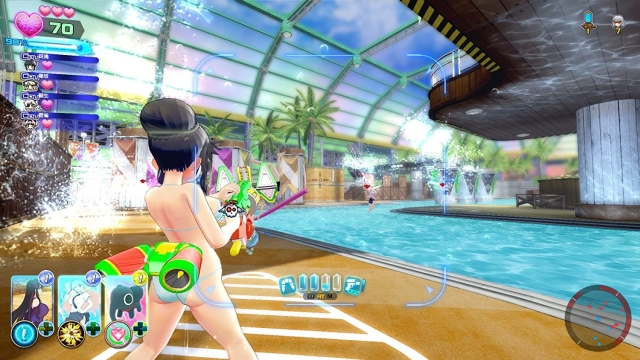 One aspect of Peach Beach Splash that I especially enjoyed is how welcoming it is to players of all skill types. When players are reduced to half health, they are granted a temporary shield that blocks all incoming damage for a time, allowing them to regain their composure and go back on the offensive. Personally, I feel that setup is brilliant insurance against new players getting discouraged. Better players cant instantly take them out. Downed players re-spawn after only 10 seconds, but they can be revived sooner if a teammate is able to reach them, as well. This vulnerable mode is a double-edged sword, however, as an enemy teammate can also deliver a coup de grâce if theyre able to reach the downed player before a friendly teammate does.

The only real issue I had with Peach Beach Splashs multiplayer is that its a niche title with a limited player base. In my time with the game, it was difficult to find matches in ranked mode and pretty much impossible in free mode. The game did somewhat address the lack of players by introducing a 3v3 ranked mode alongside the standard 5v5 mode, which does help, but the game just isnt as fun without a full 10 players.

I went into Senran Kagura: Peach Beach Splash a little apprehensive, considering the games have never been exemplary torch bearers for their genre. Theres also the fact that shooters, especially those of the multiplayer variety, are not exactly the forte of most Japanese developers. Incredibly, Senran Kaguras foray into the genre not only works, but excels in ways that many Western shooters fail. I wholeheartedly recommend Peach Beach Splash, if only so I can have more people with whom to play. Its a little lonely in here...
4/5

If you enjoyed this Senran Kagura: Peach Beach Splash review, you're encouraged to discuss it with the author and with other members of the site's community. If you don't already have an HonestGamers account, you can sign up for one in a snap. Thank you for reading!

© 1998-2020 HonestGamers
None of the material contained within this site may be reproduced in any conceivable fashion without permission from the author(s) of said material. This site is not sponsored or endorsed by Nintendo, Sega, Sony, Microsoft, or any other such party. Senran Kagura: Peach Beach Splash is a registered trademark of its copyright holder. This site makes no claim to Senran Kagura: Peach Beach Splash, its characters, screenshots, artwork, music, or any intellectual property contained within. Opinions expressed on this site do not necessarily represent the opinion of site staff or sponsors. Staff and freelance reviews are typically written based on time spent with a retail review copy or review key for the game that is provided by its publisher.