If you have a zombie fetish or have always wanted pornography in your match three game then XXZ is here to answer your prayers. This simple and short game is free and services as a warm-up for a longer version, XXL though sports unique content making it more than just a demo. Its an interesting concept and a nice twist to a very basic gameplay concept with ok graphics. There is no story to speak of -there is a zombie virus outbreak, but only women turn into zombies, and you have to fight your way to freedom. Best of all, its free.

Being free, however, does not save it from scrutiny. One of my biggest issues with the game was the lack of a tutorial. There is some help in game but its not very clear and I learn how to play mainly via trial-and-error. While match three gameplay isnt complicated, there are other aspects that might confuse players. The user interface is very simple and most backgrounds are just black. There is also no music and maybe only a few sound effects. The artwork is also on the simple side, all of the girls are (were?) white, very skinny and very busty. There isnt much variety to them outside of their hair color and whatever pose they do. The art style itself might also turn some people off. 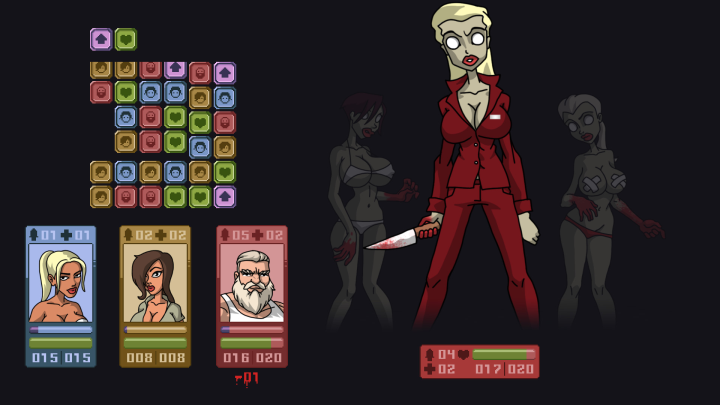 Criticism aside, this is a pretty decent game nonetheless. It elevates the simple match three formula by making it a fight against zombies. Matching the right colors will cause one of your characters to attack, or you can heal them or give them XP to raise their levels. Adding to the challenge, a character needs to be on the front lines for their attack to land, which took me a moment to figure out because the instructions are vague. As you attack, the zombies do as well and their health regenerates over time. This means you have to balance attacking, defending, and healing all at once which creates a challenge the as the zombies become stronger. The game has eight levels and each one rewards you with some sexy lady shots, that you can uncensor via patching. There are also three different save files which is nice but you probably wont need them.

Overall its a pretty good concept. The gameplay is smooth and fun. Even without the sexy ladies this would be a good standalone experience. Its also pretty short, you can probably get through it in thirty minutes to an hour. For achievement hunters, there are easy achievements to collect on Steam. If I had to add one thing, I would add the option to turn on and off censorship in game so you can see the difference of the shots. Well, and a story would be nice but I didnt expect there to be one so no loss. XXZ is a naughty free game that is surprisingly well made and makes a great selling point for anyone interested in purchasing XXL.
3/5

If you enjoyed this XXZ review, you're encouraged to discuss it with the author and with other members of the site's community. If you don't already have an HonestGamers account, you can sign up for one in a snap. Thank you for reading!

© 1998-2020 HonestGamers
None of the material contained within this site may be reproduced in any conceivable fashion without permission from the author(s) of said material. This site is not sponsored or endorsed by Nintendo, Sega, Sony, Microsoft, or any other such party. XXZ is a registered trademark of its copyright holder. This site makes no claim to XXZ, its characters, screenshots, artwork, music, or any intellectual property contained within. Opinions expressed on this site do not necessarily represent the opinion of site staff or sponsors. Staff and freelance reviews are typically written based on time spent with a retail review copy or review key for the game that is provided by its publisher.